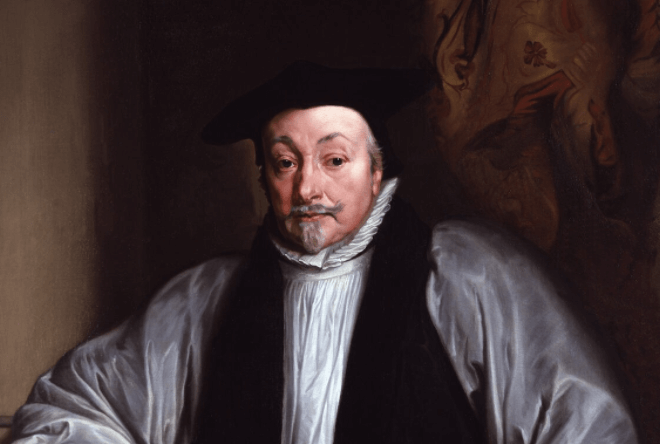 William Laud; (1573-1645), archbishop of Canterbury, who vigorously opposed Puritan influences in the Church of England.

Laud was born at Reading on Oct. 7, 1573, and was educated at St. John’s College, Oxford, where he became a fellow in 1593. He was ordained in the Church of England in 1601, and remained at Oxford for a number of years. Laud became president of St. John’s in 1611. In 1616, when he was dean of Gloucester, his governance of the cathedral made plain his opposition, not only to the Calvinist theology of the Puritans, but also to their demands for changes in the liturgical life of the church.

King James I nominated Laud to the bishopric of St. David’s in 1621, though the King hesitated to place among the bishops a man whom the Puritans charged with sympathy with Roman Catholicism. In 1622, Laud made it clear during a controversy with a Jesuit, John Percy, who used the alias “Fisher,” that he was a staunchly loyal Anglican. However, his refusal to condemn the Roman Church outright and his assertion that despite all errors the Church of Rome and the Church of England were parts of the Church Catholic alarmed many Puritans.

In 1626, Charles I, who was vigorously opposed to Puritanism and devoted to the Catholic heritage of Anglicanism, transferred Laud from St. David’s to the diocese of Bath and Wells, and two years later to that of London. Though Laud did not become archbishop of Canterbury until 1633, his influence was, decisive in English ecclesiastical affairs from the time he moved to London.

As archbishop, Laud enforced uniformity in the use of the Book of Common Prayer and obedience to the canons and regulations of the established church. Supported by the King and making wide use of the court of high commission as an instrument of repression, Laud incurred the implacable hatred of the Puritans as well as the dislike of many others, who regarded the punishments meted out to offenders against Laud’s regulations as excessive.

Laud, along with a majority of the bishops and other clergy, supported the doctrine of the divine right of kings, on which the Stuart kings James I and Charles I based their rule. This convinced their opponents that the Church of England was bound inseparably to an absolutist monarchy. Thus, the turmoil that began in 1637 with Laud’s attempt to enforce some of his program in Scotland challenged the church as well as the state.

With the Parliamentary party in the ascendant by 1640, the overthrow of the established church began. A number of bishops were arrested, the court of high commission was abolished, and the Puritans in Parliament began to impose those changes that gradually led to chaos on the English scene. The Archbishop was imprisoned in the Tower of London in 1641, though he was not brought to trial until 1644. By that time civil war raged in England between the King and Parliament. Laud’s trial was a tragic farce. Condemned to death, he was executed on Tower Hill, London, on Jan. 10, 1645.