William Hazlitt; (1778-1830), English essayist, journalist, critic, and painter, who in his firm individualism typifies one aspect of the movement known as romanticism. He was brought up in the tradition of religious and political dissent in a time of revolution and counterrevolution, and all his life he was the champion of liberty against hereditary power. In fact, all of his work—not alone his political writings—may be considered an assertion of individuality against the authority, custom, or narrow thinking that would limit its powers.

Hazlitt would have preferred to be remembered as a metaphysician, a champion of the French Revolution, or the biographer of Napoleon, but he is best known for his familiar essays and his criticism. His earlier philosophical and political writings, although generally less pleasant reading than his more mature work, are important to an understanding of his later essays and, in themselves, make at least a minor contribution to speculative thought. 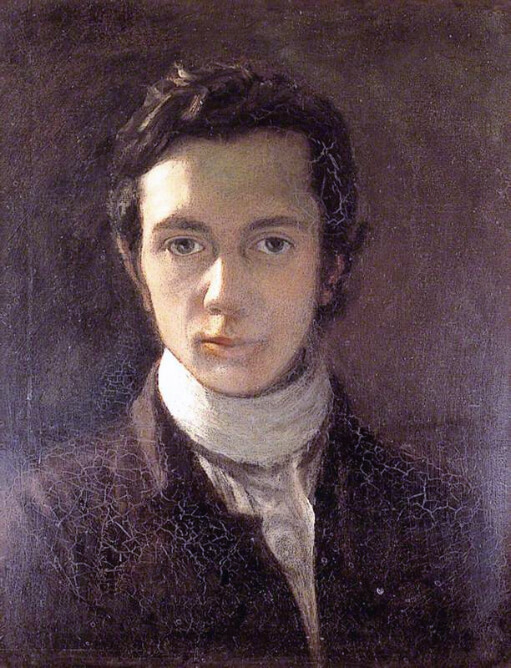 Hazlitt was born on April 10, 1778, in Maidstone, Kent, where his father, “William Hazlitt, was a Unitarian clergyman. A friend of Joseph Priestley and acquaintance of Benjamin Franklin, the elder Hazlitt spoke openly for American independence and befriended American prisoners of war in Ireland, where the Hazlitt family took up residence two years after William’s birth. In 1783 the elder Hazlitt sailed for New York with his family, but disappointed in not finding a permanent assignment in America, he returned to England in 1787 to accept an appointment to a church at Wem, in Shropshire.

The young William received his early education chiefly at home and in 1793 entered the Unitarian New College at Hackney, in London, to study for the ministry. The students there had gained a special reputation for revolutionary zeal at a time when Edmund Burke’s Reflections on the Revolution in France (1790) had made revolution unpopular, and Hazlitt began writing on philosophy and politics while still in school. By 1796 he had left Hackney, together with any interest in the ministry, and returned to Wem.

Shortly thereafter Hazlitt entered into his brief friendship with Samuel Taylor Coleridge and William Wordsworth. He met Charles and Mary Lamb at the home of William Godwin in 1803 and became a welcome if sometimes difficult addition to their circle of friends. From 1799 to 1804, Hazlitt earned his living as a painter, chiefly of portraits, living for a time in London with his brother John, a successful miniaturist.

Hazlitt went back to painting in 1810-1812, but meanwhile, in 1804, he turned to writing to make a living. In 1812 he began his long career as a journalist, first as a parliamentary reporter for the / Morning Chronicle and then as a writer on the theater, books, politics, and art. During the following years he wrote for many journals, including the London Times, the Edinburgh Review, and John and Leigh Hunt’s liberal Examiner. It was as members of the Leigh Hunt circle, apparently, that Hazlitt and John Keats met and became friends.

The years of the Napoleonic Wars and the restoration of the Bourbons—years marked by hard times and unrest—found Hazlitt defending the rights of the poor and attacking the government for its suppressive measures. In 1817-1819 the Quarterly and Blackwood’s Magazine retaliated with vicious abuse. Hazlitt’s replies—notably A Letter to William Gifford (1819)-attest to the power of his indignation.

In 1808, Hazlitt had married Sarah Stoddart, a friend of the Lambs. The only child of this marriage to survive infancy was William, born in 1811. Deep in financial and domestic difficulties, Hazlitt and his wife separated in 1819, and Hazlitt’s wretched love affair with Sarah Walker —described in Liber Amoris (1823)—began soon afterward. To marry Miss Walker, Hazlitt obtained a divorce in Edinburgh in 1822, only to discover that she had been deceiving him. In 1824 he married Mrs. Isabella Bridgewater, who left him three years later. The energies of his last years, which were beset by illness, went into The Life of Napoleon Buonaparte (4 vols., 1828-1830). Despite some brilliant passages, the book did not fulfill his hopes for it.

Hazlitt died in London on Sept. 18, 1830. His son William and his grandson, the bibliographer William Carew Hazlitt, edited posthumous collections of his works and wrote memoirs of him.

Hazlitt’s complete works fill 20 volumes. They fall into four groups that, although overlapping chronologically, may be placed in this order: philosophical writings, political books and essays, criticism of art and literature, and familiar essays.

Hazlitt’s thought on the human mind and its workings is most fully detailed in his first hook, An Essay on the Principles of Human Action (1805), and in Lectures on English Philosophy (delivered 1812; published 1836). He rejects the mechanistic rationalism and self-centered morality he found in Thomas Hobbes, John Locke, and David Hartley and argues that the mind is “naturally disinterested”—that a person becomes selfish or benevolent through habitual cultivation of his own or others’ interests.

This explanation of the mind underlies Hazlitt’s political works, such as his Reply to Mal-thus (1807) and his journal contributions collected in Political Essays (1819). A society that safeguards human rights, he asserts, cannot be achieved through reason alone but requires compassion, acquired through sympathetic identification with others. In The Spirit of the Age (1825), Hazlitt argues that the reaction against the French Revolution inhibited, in the great men of the era, the harmony of reason and emotion that is achieved through the imagination.

Hazlitt’s criticism of art and literature also rests firmly on his theory of imagination. Although some of his essays—like “On Poetry in General” in Lectures on the English Poets (1818) —deal with critical theory, Hazlitt the critic is probably best known for his ability to recreate his own penetrating experience of a work of art, as he does in Characters of Shakespeare’s Plays (1817).

After the success of his Table Talk, first contributed to the London Magazine in 1820, Hazlitt’s essays fall increasingly into the category known as “familiar.” In these it is evident that his convictions have not changed, but Hazlitt is less aggressive in asserting them. As his style responds easily to his thought and feeling, the later essays become the fullest and most attractive expression of his unyielding individualism.