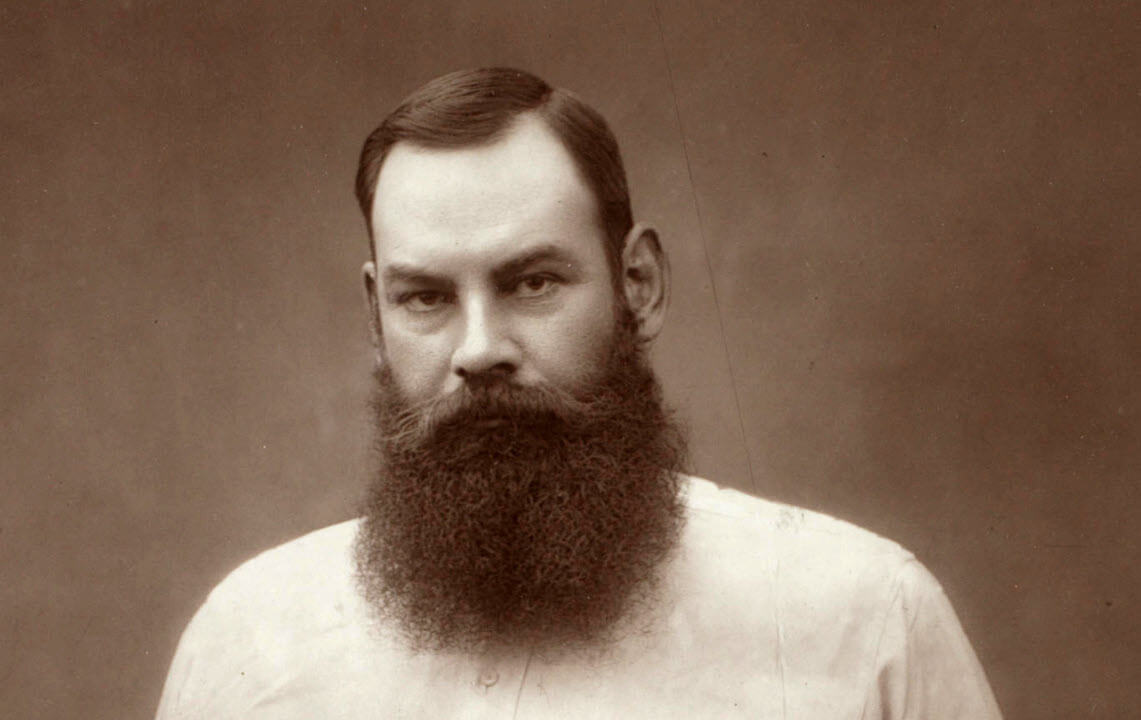 William Gilbert Grace; (1848-1915) Known as “W.G.“, “The Old Man” and sometimes as “The Champion“, Dr. W. G. Grace was a Gloucestershire country doctor who became the greatest cricketer and the outstanding figure of 19th-century sport.

Grace was born at Downend, in Gloucestershire, on July 18, 1848. His father was a village doctor, a cricketer and one of the founders of the Gloucestershire County Cricket Club. With his elder brother, E. M. Grace (known as “The Coroner”) and his younger brother, G. F. Grace, he played cricket for Gloucestershire, the Gentlemen and England. However, it was W. G. who caught the public imagination.

In 1864 Grace played his first big match in London, for South Wales against Surrey at The Oval: he made 5 and 38. In the next South Wales match (at Brighton) he made 170 and 56 not out. By the end of the season he had scored over 1,000 runs and was still only 16 years old. So he went on, for over 40 years. In Victorian times, W. G. Grace towered over the game of cricket as no other man had ever done before and as no man can ever do again. It is said that one could always tell when Grace was batting because the streets were crowded with hansom cabs making their way to Lord’s (the M.C.C. cricket ground in London).

In the season of 1871, he scored 2,739 runs at an average of 78-25, more than twice the average of any other batsman in England that year. He captained Gloucestershire and led them to win the championship. He was captain and opening batsman for the Gentlemen against the Players for many years, including the only period during which the amateurs have been the stronger side. He played cricket in America and Australia (in fact he took his wife on honeymoon with the touring side to Australia in 1873) and captained England against Australia many times. In 1876 he once made 400 not out in a minor match, and in three successive first-class innings he made 344, 177 and 318 not out. In 1895, when he was 46, he scored 1,000 runs in the month of May. In 1898 the Gentlemen v. Players match at Lord’s was declared his Jubilee Match and, although the Players won, W. G. was not out at the end. In 1899 he played in the last of his ten series of Test Matches against Australia, and his last game for Gloucestershire. Then at 50 he founded and led the London County cricket team, which played at Crystal Palace. He played for London County until 1905 and in his last Gentlemen v. Players match in 1906 at the age of 58. He died on October 23, 1915, at Eltham, Kent.

Lists of runs scored and wickets taken are not always a guide to a cricketer’s quality, but W. G. Grace’s figures are amazing. In first-class cricket he scored 126 centuries and in 44 seasons scored 54,896 runs and took 2,876 wickets. Seventeen times he went in first and carried his bat through a completed innings, and three times he and his partner bowled unchanged through the innings of an opposing side. His figures for all cricket cannot be worked out, but they would certainly be stupendous. First-class fixtures were fewer in his day and he played in countless minor and unrecorded matches.

Even apart from the runs he scored and the wickets he took, Grace stands out among all who ever played cricket. He was almost a national figure and it was said that the royal family enquired about his health. For 40 years the cricket fields were familiar with that startling figüre of a man whose great black beard flew in the wind, who wore a red-and-yellow striped M.C.C. cap and who, with his high shoulders, deep chest and huge, hairy arms, handled a man’s cricket bat as if it were a child’s toy. His high-pitched voice, raised in appeals, his bustling bowling action and his commanding stroke play, all helped to make him unforgettable. Moreover his great strength, judgment and concentration were matched by immense staying power, live-liness and keenness. He not only changed batting from a clumsy sport into a craft, but also, by his batting and his effect on the game, he raised the Standard of bowling, fielding, umpiring and pitches.

There is a whole collection of stories about W.G. He seems to have been loved by all who ever played under him and, perhaps a little less, by those who played against him.