William Faulkner; (1897-1962), American novelist and short story writer, who was one of the most important figures in 20th century literature. In a series of intricately interwoven novels and short stories set in the fictional Yoknapatawpha county in the state of Mississippi, Faulkner produced a major work of the imagination, one that transcends its setting in the American South to arrive at universal observations about the enduring lot of man, his suffering, and his dignity. Through an intense, tortuous style that is involuted and unabashedly rhetorical, there emerges in Faulkner’s works a vision of mankind that may be compared to that of the Greek tragedies.

Although fame came to Faulkner slowly and after his best work was done, recognition was heaped on him during the last years of his life. He received the Nobel Prize (1949), the National Book Award (1951), and two Pulitzer prizes (1955, 1963). The sweep of his imaginative power, the intensity of his style, and the continuous and serious experimentalism of his forms made him one of the few American writers who unmistakably deserve to be called great. 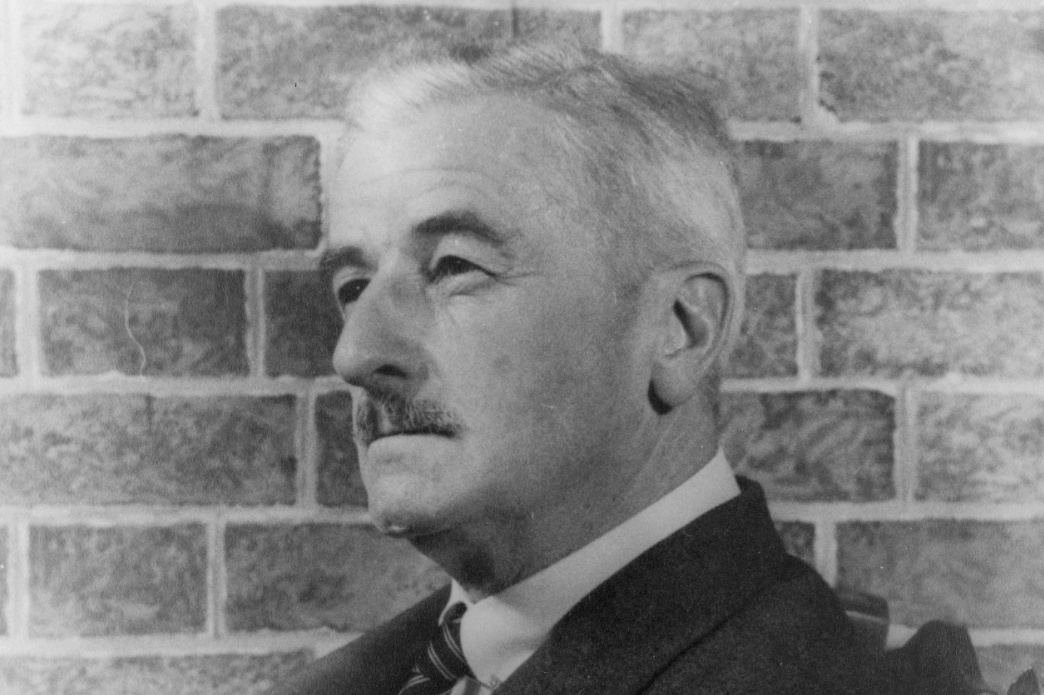 William Faulkner (the “u” was added later from an earlier spelling) was born in New Albany, Miss., on Sept. 25, 1897. His great-grandfather had moved from Tennessee to Mississippi, where he was a plantation owner, colonel in the Confederate Army, railroad builder, and author of a popular novel, The White Rose of Memphis.

Faulkner’s family moved from New Albany to Oxford, Miss., when William was five, and that town, the seat of the University of Mississippi, was to be his home for most of his life. His schooling was casual and stopped after the 10th grade. Rejected for service in the U. S. Army during World War I because he was under the minimum height, he went to Canada and joined the Royal Air Force. Although he did not see combat, he was made an honorary second lieutenant in December 1918.

After the war Faulkner was admitted to the University of Mississippi but did not complete his freshman year. Student publications, however, furnished him an outlet for his first stories and poems. In 1921 he went to New York City and tried unsuccessfully to make contacts in the publishing world. Returning to Oxford, he was appointed postmaster of the university post office in 1922, a job at which he proved monumentally inept before his resignation in 1924.

During these years Faulkner was writing lush, imitative poetry filled with fin de siècle romanticism. His mentor in these exercises and in much of his later work was a fellow townsman, Phil Stone, who kept him in touch with contemporary literary movements and helped finance the publication of his first book, The Marble Faun (1924), a collection of poems. In 1925, Faulkner lived in the French Quarter of New Orleans, where he wrote sketches and poems and was a companion of Sherwood Anderson. Anderson encouraged him to write Soldier’s Pay ( 1926), an experimental, bitter novel about a returning war veteran, and secured a publisher for the book, which received good notices but sold few copies. Faulkner then went on a walking tour in Europe and wrote Mosquitoes (1927), a satiric novel of literary life in New Orleans. He returned to Oxford in 1927, worked at odd jobs, and in 1929 married Estelle Oldham Franklin.

In his third novel, Sartoris ( 1929 ), Faulkner found his métier—the people and places of Yoknapatawpha county, which he based on Lafayette county, Miss., of which Oxford is the seat. Sartoris unloosed a remarkable flood of creative energy, and from 1929 to 1936, Faulkner wrote The Sound and the Fury (1929); As I Lay Dying (1930); These Thirteen (1931), short stories; Sanctuary (1931); Light in August (1932); Doctor Martino and Other Stories ( 1934 ) ; Pylon (1935), the only one of these books without â Yoknapatawpha setting; and Absalom, Absalom! ( 1936 ). With Sanctuary, a shocking but serious work, Faulkner won a sizable audience and received sufficient publicity to make his writing salable to the best-paying magazines, to which he contributed short stories that incorporated much of the material on which the remainder of his work was based.

Between 1936 and 1948, Faulkner did relatively little writing. His publications of this period include The Unvanquished (1938), a collection of stories, all but one of which had been published earlier; two short novels, published collectively as The Wild Palms ( 1939 ) ; The Hamlet (1940), the first novel in the “Snopes” trilogy; Go Down, Moses ( 1942), a collection of stories originally published in 1940 and 1941; and Intruder in the Dust (1948), Faulkner’s first popular success after Sanctuary.

After 1949, Faulkner wrote at an increased pace but with diminishing power. His later works include Knight’s Gambit (1949), a collection of detective stories; Requiem for a Nun (1951), a play with commentary; and A Fable (1954), an allegory with a World War I background. He also wrote The Town ( 1957 ) and The Mansion (1959), to complete the “Snopes” trilogy. His last novel was The Reivers (1962), a nostalgic comedy of boyhood.

Faulkner did not become a world figure until he was awarded the Nobel Prize for literature. Up to that time he lived in quiet obscurity in Oxford, with occasional trips to Hollywood to work on motion picture scenarios. After 1950 he traveled widely for the U. S. Department of State, and after 1957 he spent a part of each year at Charlottesville, Va. Faulkner died of a heart attack at Oxford on July 6 1962.

Faulkner’s first two novels—the experimental Soldier’s Pay and Mosquitoes, a social satire in the manner of Aldous Huxley—are the work of a young man trying his wings. They show talent but little promise of the greatness that was to come. Nor are some later books of first rank, including Pylon, a grim tale of airplane barnstorming; The Wild Palms; and A Fable, an overly elaborate allegory that too plainly shows the craftsman’s painful effort. However, these works, each technically unlike the others, must be included in the mainstream of Faulkner’s fiction because of their intense style and their experimentation with form and method.

Only when he began to delineate the people and history of Yoknapatawpha county did Faulkner find his own sure voice. This Southern setting and its denizens furnished a subject adequate to the high demands of his experimental art, enabling him to speak with authority of the nature of man. Sartoris, the first Yoknapatawpha novel, while still mannered, gives an authentic sense of character and place as it records a family like Faulkner’s, living in Faulkner’s world. The Sound and the Fury is an audacious and magnificently successful technical tour de force. It traces die decay of the once aristocratic Compson family through a narrative told in a stream of consciousness style by three people (one of whom is an idiot boy), with a concluding objective narrative. As I Lay Dying, again using the multiple stream of consciousness method, gives a brilliant account of a poor white family that overcomes enormous obstacles to’ fulfill its promise to its dead mother. Sanctuary is a bitter and terrifying vision of evil in the modern world, and Light in August is a complex story of crime and punishment, with Christian symbolism, religious criticism, and a social study of race.

Absalom, Absalom! is in many ways Faulkner’s masterpiece. A difficult novel, in which historical events are refracted through the involuted rhetoric of partially informed narrators, Absalom, Absalom! delineates the overweening ambition of Thomas Sutpen, to provide Faulkner with an effective vehicle for the history of the 19th century South. The stories in The Unvanquished, recounting the maturing of Bayard Sartoris, round off Faulkner’s obsessive concern with family, history, and place that dominated his major period. The. “Snopes” trilogy— The Hamlet, The Town, and The Mansion—deals with the rise to power of an unscrupulous poor white clan; these novels, more relaxed than Faulkner’s earlier work, are broadly comic, close to1 the folktale quality of the Southwest frontier. Go Down, Moses, which includes The Bear, Faulkner’s best-known short story, deals with the McCaslin family and its efforts to escape entrapment by the slave system upon which it feeds. Requiem for a Nun is an uneven sequel to Sanctuary, and The Reivers is a gentle, nostalgic, and quietiy comic story of a child’s induction into the adult world. Though not a great work, in its tranquil tone and happy spirit, The Reivers forms a fitting conclusion to a long and fruitful literary career.