William Dunbar; (1460-1521), Scottish poet, who was perhaps the most important poet of Scotland in the early Renaissance. He is often compared with Chaucer, but although Dunbar had Chaucer’s technical dexterity, he lacked his narrative ability and broad human sympathy.

Most of Dunbar’s biography must be hesitantly inferred from his poems. He was probably born in East Lothian, perhaps the propertyless younger son of a good family. He probably graduated from St. Andrew’s University in 1479 and was probably a priest. From 1501 to 1513 he received various payments, for unknown services, recorded in the royal treasurer’s accounts. His death has been put as early as 1513 but, possibly living on a benefice of the kind he often solicited, he may have survived to write a doubtfully attributed poem in 1520. 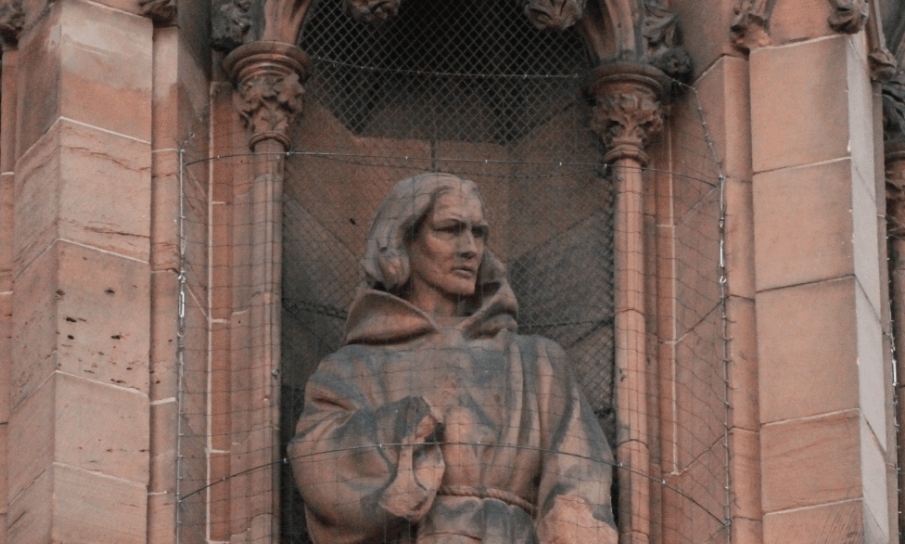 A bitter and disappointed man, Dunbar carried to perfection the art of the begging poem. He was frequently passed over for offices and pensions and, as a result, in a number of his poems he suffered the humiliation of pleading for favors from his king, James IV of Scotland. These poems attract, however, because of their flashes of grotesque humor and savage satire.

Dunbar’s resentment doubtless accounts for his acid, tough, often immensely comic poems on court and town life, friars, and women. His most scathing poem on women is The Tretis of the Tua Mariit Wemen and the Wedo (The Treatise of the Two Married Women and the Widow), written in unrhymed alliterative verse. This form was by that time somewhat old-fashioned, but Dunbar manipulated it brilliantly. The Flijting (Flaying) of Dunbar and Kennedie displays his skill in ferocious personal abuse.

Dunbar also wrote a wide range of serious meditative poems, from lamentation at the inevitability of death to exultation in the Resurrection of Christ. The orthodox ideas are expressed in competent, though not always inspired, verse.

More effective are Lament for the Makaris (Makers, that is, poets) and his Christmas hymn Of the Nativity of Christ. On occasion, as in his mock dirge parodying the Office of the Dead, his wild and extravagant gusto at the expense of serious religion contrasts sharply with the tone of his devotional poems and suggests that his piety was largely a matter of convention.

Dunbar was also a craftsman-practitioner of so-called “courtly” verse. The Thrissill and the Rois (The Thistle and the Rose), celebrating the marriage (Aug. 8, 1503) of James IV to the English princess Margaret Tudor, is a polished heraldic allegory in which the thistie stands for James and the rose for Margaret. Similarly, The Goldyn Targe (Shield) is a brilliant, though conventional, allegory on how reason defended the poet from love.