He was very popular in his time. He wrote 27 novels, more than 60 short stories, at least 14 plays, and more than 100 non-fiction works. He is considered one of the creators of the detective novel genre, through a narrative characterized by the atmosphere of mystery and fantasy, the melodramatic suspense and the detailed story. His best known works are The Lady in White (1860), Armadale (1866) and The Moonstone (1868). 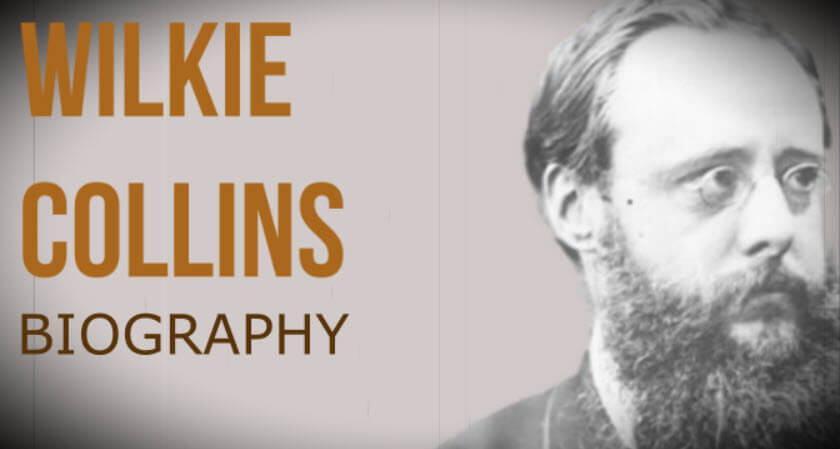 Collins was born in London on January 8, 1824, the son of the well-known academic and landscape painter William Collins. His middle name, Wilkie, was given to him in honor of his godfather, fellow artist David Wilkie. From the age of twelve to fifteen he lived with his family in Italy, a period that largely marked his education and the formation of his character. At 17 he dropped out of school and took an apprenticeship at a major tea trading firm, but after five unhappy years, during which he wrote (in 1844) his first novel, Ioláni or Tahiti as it was (which would remain unpublished for a century and a half, until 1999), he entered Lincoln’s Inn to begin studying law, although he would never practice as a lawyer, since he devoted himself entirely to literature.

After the death of his father, in 1847, Collins published his first book, Memoirs of the Life of William Collins (1848). He also came to consider the idea of ​​starting a career as a painter, exhibiting his own painting in the summer exhibition at the Royal Academy in 1849. But it was with the publication of his second novel, Antonina or the Fall of Rome (1850), and with the continuation of it, Basil (1851), when his writing career began in earnest.

A watershed event in Collins’ literary career took place in March 1851, when he met Charles Dickens through a mutual friend, Augustus Egg. From that moment, Collins and Dickens became great friends, thanks, among other things, to their common love of the theater, and they collaborated hand in hand in magazines and editions, even becoming co-authors of several works. In addition, Collins, in his work as editor, was of the work of Dickens Household Words, and several of his novels would be published by installments in the weekly All the Year Round, edited by the author of Oliver Twist, which he would end up editing and publishing his friend’s works on his own.

The friendship between the two would last a lifetime, to the point that they became related, as Wilkie Collins’ younger brother, Charles Allston, married Kate Macready Dickens, second daughter of Charles Dickens and Catherine Thompson Hogarth. After Dickens’s death, Collins also advised Georgina Hogarth, the great writer’s sister-in-law, when she was preparing, in 1880 and in collaboration with Dickens’s eldest daughter, Mary Angela, an edition of Charles Dickens’s Letters from 1833 to 1870.

Collins suffered from a variation of arthritis known as rheumatic gout that led to a serious addiction to opium, which he took in the form of laudanum to relieve severe pain. As a consequence, he began to experience paranoid illusions in which he believed he was continuously accompanied by a clone of his whom he called “Ghost Wilkie”. In his famous novel The Moonstone (1868), he prominently raised the issue of the effects of opium addiction. While he was writing this novel, his laudanum consumption was so excessive that he later confessed not to remember what he had written in a large part of the narrative.

Collins never married, but from 1858 until his death he had successive intermittent relationships with the widow Caroline Graves and later with his daughter Elizabeth, whom the writer called “Carrie.” When Caroline left him for good to marry a certain Joseph Charles Clow (October 1868), Collins met another woman, Martha Rudd, with whom he had three children: Marian (b.1869), Harriet (b.1871) and Charles William (b. 1874). In between, the widow Graves had returned to Collins, both maintaining their relationship discontinuously until the death of the writer. Wilkie Collins died in London, on September 23, 1889, and was buried in Kensal Green Cemetery in the British capital. The epitaph on his grave highlights him as the author of the novel The Lady in White.

Collins authored or co-authored 27 novels, more than 60 short stories, at least 14 plays, and a hundred nonfiction pieces. Some of his narrative works were classified at the time as “sensation novels”, an equivalent genre and a precursor to current crime and suspense and mystery novels. He also wrote about the situation of women, about social issues and about the daily reality of his time. Thus, his work Hide and Seek (1854) was carried out by one of the first deaf personages of English Literature.

Like many other writers of his time, he published most of his serialized novels, in magazines such as the aforementioned All the Year Round, and for them he became recognized as a master of the style, creating just the right degree of suspense and intrigue for manage to keep your reading public aware of the story week after week. The circulation of All the Year Round increased notably with the consecutive publication of A Tale of Two Cities (1859) by Dickens and The Lady in White (1860) by Collins.

After the publication of this novel, Collins enjoyed ten years of great success. His next work, Sin nombre (1862), combined social denunciation – it criticized an absurd law that applied at that time to the children of unmarried parents – with a dense structure of a revenge thriller. Armadale (1866), the only novel written by Collins in the 1860s that did not appear in installments in All the Year Round, drew fierce criticism, usually centered on a transgressive character for the time: the evil Lydia Gwilt.

In addition, the novel was a financial blow for the author and a resounding commercial failure: the amount advanced by The Cornhill Magazine for publishing rights was exceptional, eclipsing by a substantial margin the prices paid for the vast majority of novels. similar of the time, and finally the sales, well below the expectations created, did not manage to amortize the investment of the publishers. The Moonstone, published in 1868, was the last of the novels in the author’s most successful cycle and, despite an initial somewhat cold reception from critics and Charles Dickens himself, it meant a return for Collins to his more successful style. characteristic and restored the commercial value of a writer whose success in the competitive Victorian publishing market had been declining since his first masterpiece.

Considered by many to be the forerunner of the crime novel within the tradition of English storytelling, The Moonstone remains Collins’ most popular and critically acclaimed novel. At the time, it was defined by the poet and playwright TS Eliot as “the first, the longest and the best novel of modern English crime literature, in a genre invented by Collins and not by Poe”, and the writer of detective genre Dorothy L. Sayers (1893-1957) referred to it as “probably the best detective novel ever written.” In addition, one of its central characters, Sergeant Cuff, has been considered as the literary precursor of the famous fictional detective Sherlock Holmes, created by Arthur Conan Doyle in 1887.

The Lady in White and The Moonstone share an unusual narrative structure, similar to that of an epistolary novel, in which each part of the book has different narrators, each with a different narrative voice. (Armadale also has a similar structure, albeit to a lesser extent, of storytelling through correspondence between characters.)

However, various factors (the death of Dickens in 1870, which meant for Collins the loss of his literary mentor; his increasing drug dependence; and an ill-advised inclination to use his narrative as a vehicle for recurring denunciation of social injustices, are frequently cited, to the detriment of the suspense and intrigue that had given him such good results) led Collins to his decline in the 1870s and 1880s. His works (novels and short stories) from that period, although not devoid of some literary value, they are generally considered as minor and, of course, inferior to his previous great productions, which is why they have reached our days practically ignored by critics.

The novels after The Moonstone contained fewer thriller elements and more social criticism. The topics covered were still interesting, but the popularity of the author declined considerably. The controversial English poet Algernon Charles Swinburne (1837-1909) commented on Collins: “What was it that brought Wilkie’s great genius to his doom? Some demon whispered, ‘Wilkie has a mission!”