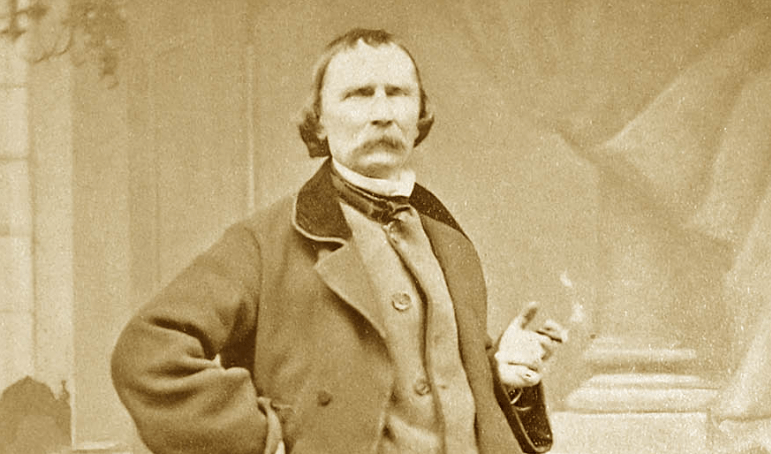 Wilhelm von Kaulbach; German painter: b. Arolsen, Oct. 15, 1805; d. Munich, April 7, 1874. He learned the rudiments of his art from his father who was a goldsmith and engraver on copper. He was a good draftsman when he went to Düsseldorf in 1821 and entered the Art Academy where his chief teacher was Cornelius, already acknowledged as the head of the Düsseldorf school of historic painting. When Cornelius in 1825 removed to Munich, at the invitation of King Ludwig of Bavaria, he followed him and soon became his disciple in the art of ceiling decoration, examples of which are Apollo and the Muses in the great hall of the Odeon, and the allegorical figures of the Four Chief Rivers of Bavaria and of Bavaria in the portico of the royal palace.

His pure and classic power of design is well exhibited in the 16 wall paintings, illustrating the story of Cupid and Psyche, in the palace of Duke Maximilian at Munich. He was at this time attracted to the study of Hogarth’s works, the fruit of which appeared in his illustration of books, including the works of Shakespeare, Goethe and Schiller, and the Reineke Fuchs.

He painted many great incidents in the history of Germany, including 12 scenes from Klopstock’s Hermann’s Battle, and the Death of Hermann, wall paintings in the queen’s palace at Kingsbau. But his most ambitious and comprehensive works are those in which he endeavored to represent the progress of the human race by a series of typical historic tableaux. These comprise the Tower of Babel; Age of Homer; Destruction of Jerusalem; Battle of the Huns and Romans; The Crusaders; The Reformation (1847-1863).

The range of his intellectual ideas, his wonderful power of generalization, his mastery of every style of painting from caricature to the sublimity of the Italian cinquecentists, as represented by Michelangelo, have no parallel among modern painters. His coloring may be a little cold, sometimes a little crude, but his sense of form, his loftiness of conception and his genius for harmonious composition have won for him the first place among German artists of the transition period between the idealism of Cornelius and the realism of the modern historic school.