Who were The Brothers Grimm and why are they famous? Jacob and Wilhelm Grimm biography, works and fairy tales information. 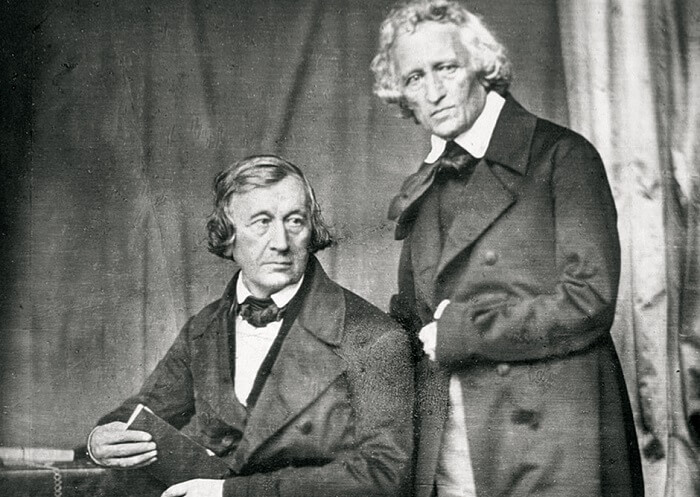 Grimm’s Fairy Tales are famous all over the world. Two German brothers, Jacob and Wilhelm Grimm, collected them at the beginning of the 19th century. They discovered the tales partly by reading in very old books and manuscripts and partly by persuading country people to tell Aem all the stories which they could remember hearing in their own childhood.

The stories and legends that the Grimm brothers published go back for hundreds of years, and they had been handed down from mothers to their children for generations. Probably many old tales had been lost and forgotten on the way and so were not included in the book. Some of the stories are very ugly and frightening and not at all suitable for small children, but there are many delightful and exciting ones that thousands of boys and girls have enjoyed. Some, like Cinderella and The Sleeping Beauty, were already known in France and other countries, but others had probably never been heard outside Germany before.

One of these is the tale of Mother Holle, the old woman who lived under the earth and made the snow fall whenever she shook out her feather bed. Red Riding Hood, the story of the little girl who went to visit her granny in a hut in the wood and found a wolf in the bed, probably goes right back to the time when wolves really did prowl over northern Europe, endangering the lives of the peasants in the countryside. There are plenty of giants and witches and goblins in the stories, but although they are called Fairy Tales, fairies as we usually think of them are never mentioned at all.

Translated in many languages

The stories have been translated into many languages, and other writers, artists and musicians have been inspired by them. The German composer Engelbert Humperdinck wrote an opera about Hansel and Gretel, the woodcutter’s children, and their adventures with the witch who lived in a cottage made of gingerbread. The story of Snow-White, the maiden who was sheltered in the forest by seven dwarfs, was made into a film by the American Walt Disney.

The brothers Grimm did many other things besides publishing fairy tales. They were very learned men, who translated foreign poetry, wrote books about German grammar and the German language, and also began to make a dictionary, though they did not live to finish it.

Jacob Grimm was born in 1785 and Wilhelm in 1786. They were devoted to one another and were always together, not only at school and college where they both studied law, but in later life as well. For a time they were librarians and this gave them a special chance to study many remarkable old books. Later on they lectured to university students on the history of German literature. They shared all their possessions their books and money, and did all their work together. When Wilhelm got married, the elder brother, who always remained single, lived with him and his wife.

At one time the brothers took an interest in politics, protesting against the unjust rule of the King of Hanover, the little north German kingdom where they lived. As a punishment for this they were banished and went to live in Berlin instead.