Willem Einthoven; (1860-1927), Dutch physiologist who was awarded the 1924 Nobel Prize in physiology or medicine “for his discovery of the mechanism of the electrocardiogram.“

In 1903, Einthoven developed the first string galvanometer. It consisted of a delicate conducting thread stretched across a magnetic field. An electric current flowing through the thread caused it to deviate at right angles to the direction of the magnetic lines of force, with the extent of the deviation proportional to the strength of the current. The delicacy with which the string galvanometer responded to small amounts of current made it possible for Einthoven to construct an electrocardiograph that could detect and record the tiny and varying electric current to which heart action gives rise. Continually improving his device, Einthoven worked out the significance of the various peaks and troughs of the recordings, and by 1906 he was correlating the recordings with various types of heart disease.

Einthoven was born in Semarang, Java, on May 22, 1860. He received his M. D. from the University of Utrecht in 1885. He was appointed immediately to a professorship of physiology at the University of Leiden, Netherlands, where he remained until his death on Sept. 29, 1927. 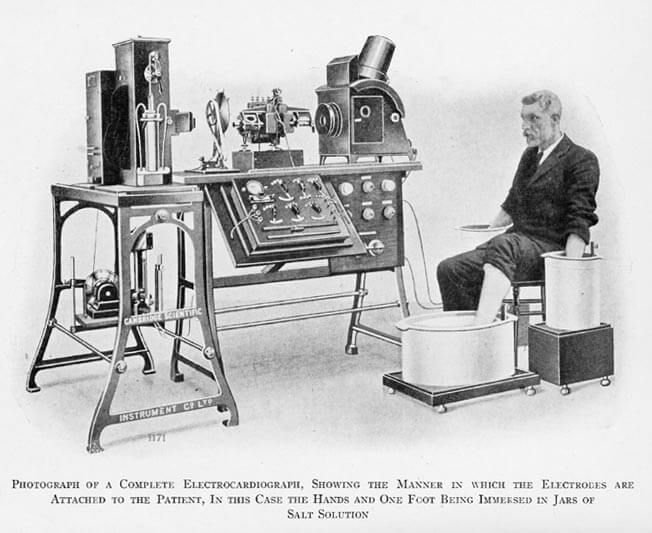 Before Einthoven, it was known that the beating of the heart produced electrical currents, but the instruments of that time could not adequately measure this phenomenon without electrode plates directly on the heart. Anatomist Willem Koster(1834-1907), who taught joint mechanics there, exerted a decisive influence. It was he who sparked Einthoven’s interest in writing his “candidat” thesis (approximately equivalent to the Anglo-Saxon Bachelor of Science degree) on the elbow joint during his medical studies. A particular circumstance led him there: it was a wrist fracture that he suffered during sports practice. Forced immobilization allows him to think and reveals his interest in hand movements and joint functions of the shoulder and elbow During his last years of study, two professors influenced Einthoven’s scientific interests: the ophthalmologist Herman Snellen(1834-1908), with whom he worked for a short time at the well-known eye hospital “Gasthuis voor Ooglijders» in Utrecht, as well as the great physiologist Franciscus Cornelis Donders(1818-1889) with whom he worked in close association and under the direction of which he carried out his thesis promoting his research on stereoscopy by color variations (Kleurverschil leads Stereoscopie), of which he explains the phenomenon from the different lengths of red and blue light wave.

In early 1901, he completed a series of prototype string galvanometers. This device used a conducting filament through a wire that passed between strong electromagnets. When a current passed through the filament, the magnetic field created by the current could cause the string to move. A shine of light on the string was shown as a moving shadow on photographic paper, forming a continuous curve and showing the movement of the string. original machine, it required water for the cooling of the powerful electromagnets, requiring five people for its operation and with a weight calculated at 250 kilograms. This device increased the sensitivity of the standard galvanometer so that it could measure the electrical activity of the heart, despite the isolation of flesh and bone.

In 1901 he published his first scientific article reporting his experiences with the string galvanometer and its usefulness for recording cardiac potentials (“Un nouveau galvanométre“. Arch Néerland Sci exactes naturelles , Series 2, 6:625-633). Five years later, he described in detail the clinical applications of the electrocardiogram in the article “Le telecardiogramme” (1906). Arch Int Physiol . 4:132-164. This article laid the foundations for the extraordinary avalanche of information that has developed since then about this essential tool in cardiological analysis .

In 1902 he was a member of The Royal Netherlands Academy of Arts and Sciences. His work earned him the Nobel Prize in Medicine in 1924 .