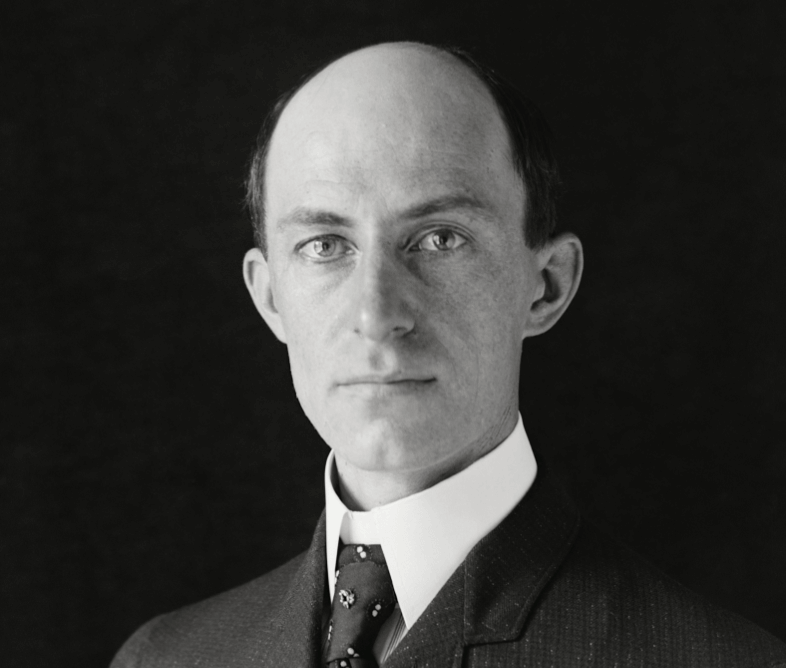 Wilbur Wright; b. Millville, Ind., April 16, 1867; d. Dayton, Ohio, May 30, 1912; and Orville, b. Dayton, Ohio, Aug. 19, 1871; d. there, Jan. 30, 1948; American inventors. Their father, Milton Wright, was a bishop of the Church of the United Brethren in Christ. Though both brothers completed high school courses, neither graduated formally; Wilbur did not return from Dayton to Richmond, Ind., where the family had been living, to receive his diploma, and Orville, in his final year, took a special course. Neither Wilbur nor Orville ever married. As a youth Orville became interested in printing and in 1889 started the West Side News, in which Wilbur joined him; it was printed on a homemade press. In 1893 the two brothers opened a shop for the sale, repair, and manufacture of bicycles.

After the death (1896) of Otto Lilienthal, the German engineer, news of whose gliding experiments Wilbur and Orville had followed eagerly, they thought of taking up gliding where Lilienthal had left off. Their interest in aerodynamics had been aroused in childhood by a toy helicopter powered by rubber bands. Finding few books on the subject in the Dayton Public Library, they wrote in 1899 to the Smithsonian Institution at Washington for a bibliography. Books they then read included Lilienthal’s The Problem of Flying and Practical Experiments in Soaring; and Progress in Flying Machines, by Octave Chanute, the best historian of attempts to fly. Wilbur came to know Chanute, at first by correspondence, and for a number of years the brothers kept him informed of their progress.

Orville thought a flying machine should be under better control than any yet tried, and that for sidewise balance there should be a way to present the right and left wings at different angles to the wind; Wilbur hit on a practical way to do this, by twisting or warping the wings. To test this method, they built, in July 1899, a small kitelike glider with superposed surfaces, each 5 feet from tip to tip. It showed that their system of control was effective, and they then planned a man-carrying glider.

From United States Weather Bureau wind records they found that Kitty Hawk, N.C., was one of the breeziest places in the country; they also learned that the area had sand hills, free of growth and suitable for gliding. They went there in 1900 with their first man-carrying glider, which was 18 feet from tip to tip. It included a feature not on any previous glider, a horizontal front rudder or elevator about 4 feet in front of the lower main plane; the rear edge could be raised or lowered for fore-and-aft balance. A cradle, in which the operator lay, was connected with wires in order to give a spiral twist to the wings; a movement of the body of 2 or 3 inches from one side to another was enough to give all the twist needed. It was the brothers’ intention to fly the glider as a kite, with a pilot aboard, to gain practice, but they found this possible only when the wind was at least 25 miles an hour. The glider failed to perform in lifting as had been calculated from the Lilienthal tables of air pressure, but they were encouraged by the way their method of control worked. Before leaving camp for the year, they took the machine to Kill Devil Hill near Kitty Hawk and made about a dozen glides down the side of the hill. Disappointed with the glider’s lifting ability, they determined to return the next year with a larger machine having wings of deeper curvature.

Since the results obtained did not at all agree with the estimated values computed from Lilienthal’s tables and other accepted tables of air pressure, the brothers wondered if Lilienthal’s figures and all scientific books on the subject could be wrong. Toward the end of 1901, they experimented with miniature wings in a 6-foot wind tunnel, testing more than 200 types of wing surfaces set at different angles. They measured monoplane, biplane, and triplane models, and models in which one wing followed the other; they measured the lift produced by different aspect ratios (the ratio of span to chord) and found that the greater the span in proportion to the chord, the more easily the wing would be supported; they measured thick and thin surfaces. Among other things, these experiments proved the undesirability of the sharp edge at the front of an airplane wing, then generally advocated by others (although it has now been readopted for supersonic flight). They also learned that there was a loss from having one wing above another.

These experiments marked the turning point in attempts by man to fly. The Wrights now knew what no man had ever known before: how to compile tables of figures from which one might design an airplane that could lift itself and ny. Their 1902 glider, built from their own calculations, had a wing span of 32 feet, 10 feet more than one used in 1901, but the most noticeable change was the addition of a tail with fixed twin vertical vanes. In further experiments they discovered that the tail is a balancing device needed to supplement the presenting of the wings at different angles to the wind—the basic scheme of control used in all airplanes today. With the 1902 machine the Wrights made glides of more than 600 feet, and they could glide at a smaller angle of descent, closer to the horizontal, than the hawks that they observed. When they built their first power machine the next year, equipped with a motor of their own make, they felt sure it would fly.

On Dec. 17, 1903, at Kitty Hawk, Orville made the first flight of 120 feet; Wilbur, in the fourth and longest, made 852 feet in 59 seconds. During 1904 and 1905 they made further experiments at a field near Dayton, Wilbur achieving a flight of 24 miles in 1905. They closed a contract with the United States War Department for the first army plane in 1908, for which tests were completed in 1909. Meanwhile, in 1908, a Wright company was formed in France, where Wilbur gave demonstrations and trained pilots. In 1909 Orville flew in Germany, and Wilbur made sensational flights in New York City in connection with the Hudson-Fulton Celebration. By the end of 1909 an American Wright company had been organized. In 1948 the original plane flown at Kitty Hawk in 1903, which had been temporarily lent to the Science Museum at South Kensington, London, was returned to the United States for permanent exhibition in the National Museum at Washington, D.C.