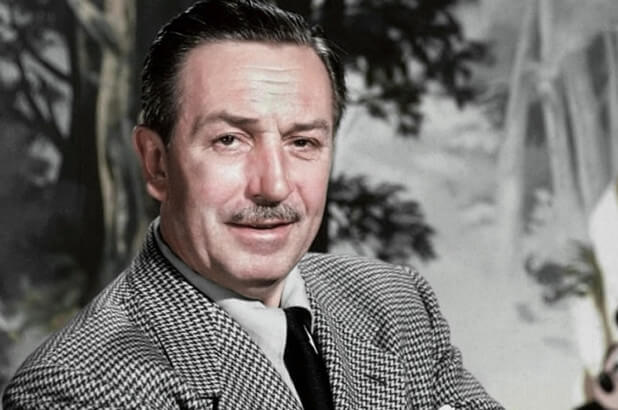 Walt Disney; (1901-1966), American motion picture animator and producer, who created the world-famous cartoon character Mickey Mouse. Walter Flias Disney was born in Chicago, 111., on Dec. 5, 1901. He began producing advertising films in Kansas City, Mo., in 1919, and then turned to animation, but with only limited success. He moved to Hollywood, Calif., where he and his brother Roy became partners. Their first two films featuring Mickey Mouse were silent, and the partners were unable to get them released commercially, but when Disney added a sound track to Steamboat Willie (1928), Mickey Mouse and Walt Disney became internationally famous.

Disney introduced a new method for synchronizing sound with animation and was the first to use the three-color process (in Fun and Fancy Free, 1932). He produced the first fea-ture-length animated picture (Snow White and the Seven Dwarfs) and the first television series in color (Walt Disney’s Wonderful World of Color, beginning 1961). Disney also launched Disneyland, a gigantic and lavish amusement park in Anaheim, Calif., in 1955. He died in Los Angeles on Dec. 15, 1966.

DISNEYLAND, is an elaborate amusement park for adults and children in Anaheim, Calif. It was built by film producer Walt Disney and associates and opened on July 15, 1955. At the entrance is Main Street, U. S. A., modeled after an American town of the 1890’s. The four main amusement areas are Adventureland, Frontierland, Fantasyland, and Tomorrowland. A hotel, restaurants, and a parking lot are provided for the several million visitors that Disneyland attracts each year.

Construction was begun in 1967 by Walt Disney Productions on an East Coast counterpart of Disneyland. Located near Orlando, Fla., the new amusement complex opened in 1971 as Walt Disney World.