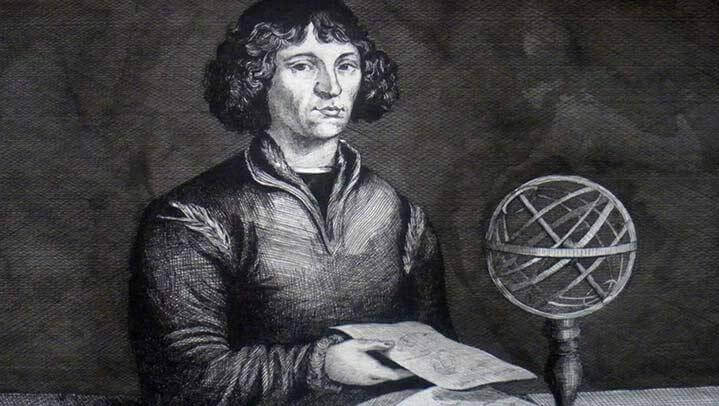 Nicolaus Copernicus; (1473-1543), Polish astronomer, who founded modern astronomy. Copernicus was born in Toruri on Feb. 19, 1473. He studied mathematics, astronomy, law, and medicine at Cracow, Bologna, and Padua, and received his doctorate at Ferrara. In 1497 his uncle, a powerful prelate, secured his election as canon of the cathedral in Frombork, and he held this lucrative post until his death.

At an early stage in his career Copernicus became aware of serious defects in the Ptolemaic astronomical system that he had learned as a student. Hoping to get rid of these grave errors, he began to review the older literature of the subject and found that a minority opinion had been long neglected. This opinion placed the sun rather than the earth at the center of the universe, and it was this heliocentric concept that Copernicus chose for the basis of his system.

In removing the earth from its central position, Copernicus made his boldest break with the ideas accepted in his time. His contemporaries still agreed with their primeval ancestors about the nature of the earth. They adhered to the traditional notion that heaven was above and around the earth. In the sky they beheld the sun, moon, stars, and planets, which they put in the category of heavenly bodies, constantly on the move. On the other hand, they perceived no motion of the earth and therefore placed it in an entirely different category. According to this reasoning, the heavenly region had its lowest limit in the moon. This sharp separation between heaven and earth was basic in the view of the universe that was accepted by Copernicus’ contemporaries.

Copernicus comprehended the true nature of the earth.

He fully understood that it is a planet revolving about the sun, in the company of the other planets. Therefore, like its fellow planets, it too is a heavenly body. Since the earth itself is in the heavens, the contrast between heaven and earth vanished, being replaced by the modern concept of space.

This aspect of Copernicus’ thinking unavoidably took him beyond the boundaries of technical astronomy. His pronouncement that the earth is a moving planet was bound to disturb those who had the power to suppress his writings and punish him, even with death, as they often had done to nonconformists. Therefore, as a prudent man, Copernicus circulated his thoughts cautiously. He submitted them in handwritten form to the scrutiny of a few friends and specialists.

Since his brief manuscript could easily be copied and thus fall into the hands of some unsympathetic person, he deliberately withheld his name as author. Nevertheless, the startling news of his magnificent discovery spread steadily. Some of his admirers in high places urged him to put his fears aside and allow his book to be printed. For the purpose of testing public reaction, a summary of his astronomical system was issued by his first and only disciple, Rheticus. When this trial balloon went up without producing an angry explosion, Copernicus finally consented to the publication of his masterpiece. By the time it was printed in 1543 under the title The Revolutions of the Heavenly Spheres, he was already on his deathbed. He died in Frombork, Poland, on May 24, 1543, and thus escaped the harsh penalties inflicted on some of his later supporters.