Karl Friedrich Schinkel; (1781-1841), German architect and artist in the neoclassical style. He was born in Neuruppin, Brandenburg, on March 13, 1781, and studied architecture in Berlin under Friedrich Gilly and in Rome. Although he began his architectural practice in 1798, until 1816 he was principally a painter of romantic landscapes noted for their classical and Gothic architecture. He designed his first major public building, the Neu Wache (“new gatehouse”) in Berlin in 1816. This was followed by a series of public buildings and palaces, designed or remodeled, in Berlin or Potsdam. Schinkel also designed stage sets, among which was one for Mozart’s The Magic Flute (1815), interiors, furniture, jewelry, silver, gardens, and medals, including the famed Iron Cross. 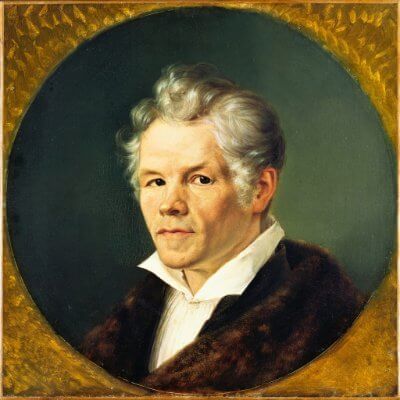 Most of the buildings Schinkel designed are in a correct, precise, classical style that, though cold in its perfection, helped to reform German architecture. His designs in the Gothic revival style, notably the ill-proportioned Werdereresche Kirche (1821-1831) in Berlin, are less acceptable to modern taste. Schinkel used a style of his own in the Bauakademie (Academy of Architecture) and in the project for a library in Berlin in the 1830’s, which strikingly anticipated the work of the American Louis Sullivan, the Netherlander Hendrik P. Berlage, and other forerunners of modern architecture. Form, suitably decorated, followed function, but since Schinkel’s patroijs preferred Greek or Gothic revival, he was never able to develop a personal style. He died in Berlin on Oct. 9, 1841.