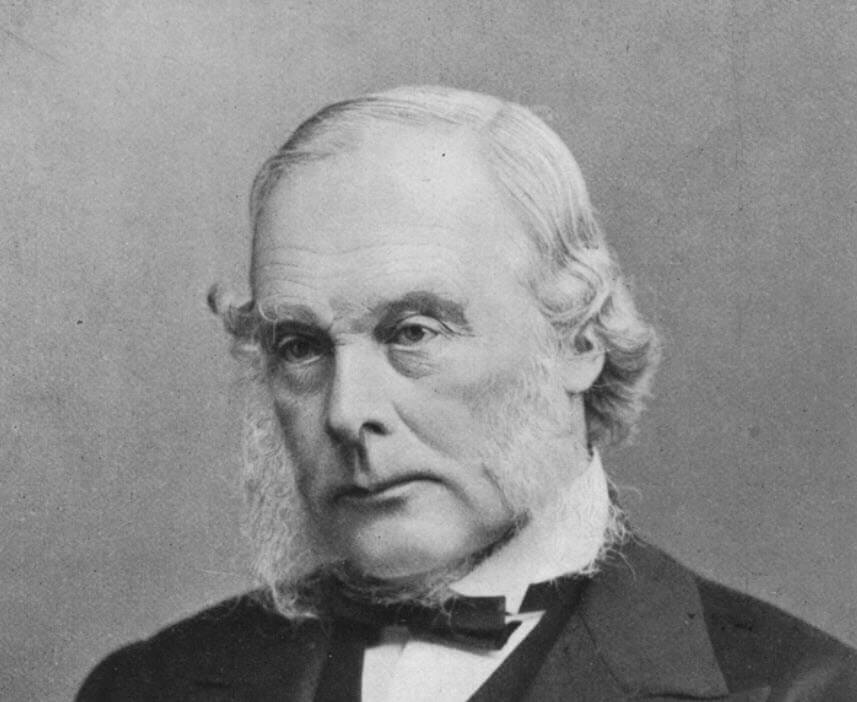 Joseph Lister; (1827-1912), English surgeon, who was responsible for the development of antiseptic surgery, one of the greatest advances in modern medicine and surgery.

Lister was born in Upton, Essex, on April 5, 1827. He attended University College, London, where he received his A. B. in 1847 and his medical degree in 1852. The next year he went to Edinburgh to work with the surgeon James Syme. There he joined the staff of the Royal Infirmary and married Syme’s eldest daughter, Agnes. In 1861, Lister became surgeon to the Royal Infirmary in Glasgow where he spent eight fruitful years developing his system of antiseptic surgery. He returned to Edinburgh to take Syme’s chair as crown professor of surgery, moving finally to King’s College Hospital, London, in 1877.

During his early years at Edinburgh and Glasgow, Lister investigated a variety of problems closely related to surgery. These problems included inflammation and pus formation and the coagulation of blood in wound healing. His approach to surgery was physiological and scientific. To minimize postoperative infections, Lister attempted to clean up the wards and to perform surgery as cleanly as possible. Despite his efforts, his patients still had an appalling rate of hospital gangrene, pyemia, and erysipelas, common surgical complications at that time. It is known now that these are due mainly to bacterial contamination of open wounds, but in the decade prior to 1865 the germ theory was only slowly being worked out.

The French chemist Louis Pasteur had established that microorganisms were responsible for fermentation and putrefaction. Lister became aware of Pasteur’s ideas and results, and he reasoned that microorganisms were also responsible for wound infection. Accordingly, if wounds were kept free of microorganisms, they would also remain free of infection. The important point is that Lister not only accepted Pasteur’s results but he also adopted the underlying theory—that minute germs can cause infections.

Since Pasteur’s methods of killing germs by heat and filtration were impractical for surgeons to use, Lister experimented with solutions of carbolic acid for this purpose. He introduced a somewhat complex system involving carbolic acid dressings, the cleansing of instruments and ligatures in carbolic solutions, and, later, even spraying the air around the operating table with carbolic acid. Soon, Lister had amazing results with a marked decrease in the incidence of infection. In 1867 he reported that in a series of cases involving severe compound fractures there were only two deaths—remarkable results at that time.

In subsequent years, Lister expanded and modified his techniques of antiseptic surgery, always striving for its wider acceptance. The antiseptic idea slowly gained adherents in England and the United States and won enthusiastic response from some German and French surgeons. However, resistance to change, the ,complexity and expense of antiseptic dressings, Lister’s frequent modifications of his system, and, above all, the failure of many physicians and surgeons to accept the germ theory of disease delayed full application of Lister’s ideas for more than a decade. The evolution of aseptic surgery, preventing germs from getting to the operative site by use of high-pressure steam sterilization for gowns, drapes, and instruments, was but a logical extension of Lister’s system.

Lister retired from King’s College Hospital in 1893. He helped establish the British Institute of Preventive Medicine, later renamed the Lister Institute. In 1897, Queen Victoria, a former patient of his, elevated him to the House of Lords as Baron Lister of Lyme Regis. He was the first medical man so honored. Lister died in Walmer, Kent, on Feb. 10, 1912.