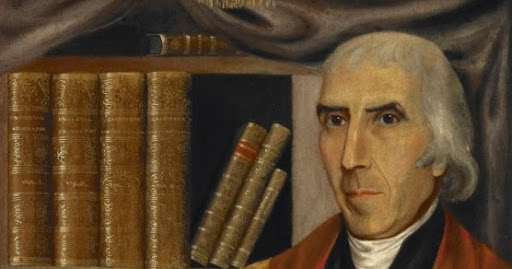 Jedidiah Morse; American clergyman and geographer: b. Woodstock, Conn., Aug. 23, 1761; d. New Haven, June 9, 1826. He graduated from Yale College in 1783, remained for two more years to study theology, and was ordained in 1786. For 30 years, from 1789, he was pastor of the First Congregational Church in Charlestown, Mass. Strongly conservative in his views and opposed to Unitarianism, he founded a periodical, the Panoplist (1805), which set forth the orthodox point of view and deepened the split between orthodox Congregationalists and Unitarians. Morse was one of the founders of Andover Theological Seminary (1808), the New England Tract Society (1814), and the American Bible Society (1816), as well as a vigorous Federalist periodical, the Mercury and Nem England Palladium (1801). He also wrote the valuable Compendious History of New England (with Elijah Parish, 1804) and Annals of the American Revolution (1824).

Morse is remembered especially for his widely circulated geographical texts, which for the first time gave adequate attention to American geography. The first geography to be published in the United States was his Geography Made Easy (1784), which was followed by .The American Geography (1789), later published as The American Üniversal Geography; Elements of Geography (1795) ; The American Gasetteer (1797) ; and A New Gazetteer of the Eastern Continent (with Elijah Parish, 1802). Samuel F. B. Morse was his son.

Another son, was the founder, proprietor, and editör (1823-1858) of the Congregationalist newspaper, the Observer, in New York City. He collaborated with his father on A New System of Geography (1822), a widely popular text; and, beginning about 1835, worked out a new process of printing maps, which he called cerography and applied in various atlases issued as supplements* to the Observer. He also published A Geographical, Statistical and Ethical View of the American Slaveholders’ Rebellion (1863) and Memorabilia in the Life of Jedidiah Morse (1867).