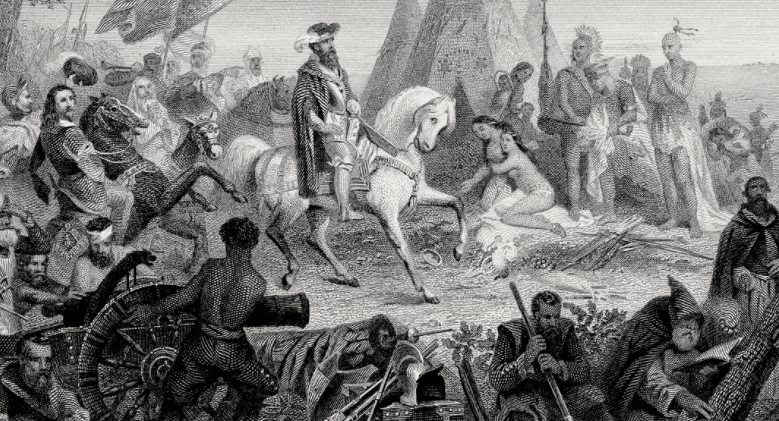 Hernando de Soto; (1500-1542), Spanish conquistador and explorer in the Americas, who discovered the Mississippi River in 1541. He was born in Jérez de los Caballeros, Spain. After completing his education at the University of Salamanca, he went to Panama in 1519 to join his patron, Governor Pedrarias. De Soto campaigned in Panama and then went to Nicaragua to win that province for Pedrarias against Gil González Dávila in 1525-1526. For several years thereafter, in partnership with Hernán Ponce de León, he carried on a profitable trade in Indian captives. Late in 1530 he lent his two ships to Pizarro for the venture to Peru.

Following the imprisonment of Atahualpa, De Soto became the emperor’s friend and protector. He was off on a mission when, in 1533, the Spaniards determined to execute Atahualpa after collecting the fantastic tribute that his subjects had gathered to ensure his release. On his return, De Soto was very angry, and his respect for Pizarro cooled notably. He stayed on, however, and was able to mediate between the two rivals, Pizarro and Diego de Almagro. But a day came, in 1535, when the situation proved impossible. De Soto went back to Spain, now a very wealthy man.

De Soto was held in much honor in Spain, and he made a successful marriage in late 1536 to a daughter of Pedrarias, Isabella de Bobadilla. But life in Spain began to pall on Hernando, and he yearned to return to an active life. He hoped to lead an expedition of conquest inland from the kingdom of Quito (Ecuador) to serve as governor of Guatemala. Instead, he was named adelantado (royal deputy) of the Floridas in 1537. It was a challenge, for Juan Ponce de León and Pánfilo de Narváez had already failed to conquer the area. The explorer Cabeza de Vaca had returned to Spain, and De Soto tried to enlist him as his second in command; but Cabeza de Vaca had his own plans and merely shared his knowledge of North America with De Soto.

On May 25, 1539, De Soto led the van of his party ashore at Charlotte Harbor in “La Tierra Florida.” The next months were spent in futile searching for riches in Florida. In the process Juan Órtiz was turned up, a survivor of the Narváez expedition who had been saved from death by a chieftain’s daughter many years before the questionable Pocahontas-John Smith incident; Órtiz proved valuable as an interpreter. But the closest the Spaniards came to great treasure were the pearls at Cutifachiqui, in the realm of the Carolina chieftainess, after they had crossed Georgia. Later they lost the pearls.

De Soto’s scouts probably went as far as Tennessee. Then the army moved through Alabama toward tile Gulf of Mexico, hoping to make contact with the fleet, which had returned to the Caribbean islands for supplies. At Mabilla (near Mobile) the Indians enticed the Spaniards into a fortified town and very nearly killed them. After that close escape, De Soto’s story is one of a frantic search for wealth that was never found.

Moving northward and westward through Mississippi in 1541, the Spaniards came to the banks of the great river, which they called Bio del Espíritu Santo. Then they probed into Louisiana and Arkansas, and possibly into Oklahoma. Meanwhile, fever and disappointment had broken the health and spirit of De Soto, and on May 21, 1542, he died and was buried in his river.

Before his death De Soto named Luis de Moscoso to lead the party back to civilization. The survivors reached Mexico in 1543. But even De Soto’s failure was not without reward—fame as one of the conquistadors of North America and discoverer of its greatest river, the Mississippi.