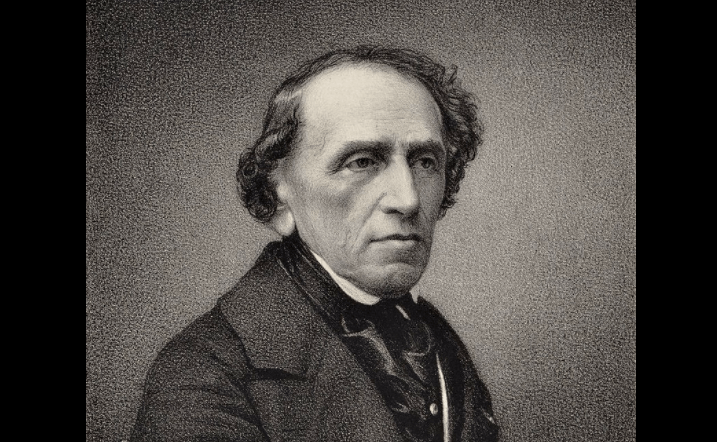 Giacomo Meyerbeer; (real name Jacob Liebmann Beer), German composer : b. Berlin, Germany, Sept. 5, 1791 ; d. Paris, France, May 2, 1864. Born into a family of Jewish bankers, he became a prodigious pianist before his tenth birthday. After studies in Berlin and Darmstadt, Meyerbeer heard his oratorio Gott und die Natur sung at Berlin in 1811, and his first opera— Jephthas Gelübde—at Munich in 1812. Neither of these was successful, but Wirt und Gast, his second opera (Stuttgart 1813), was received well enough to have been heard in Vienna, Prague, and Dresden by 1820. When Antonio Salieri, the noted court conductor at Vienna, advised Meyerbeer to go to Italy for further study, he did so, first visiting Venice in 1815.

After having acquainted himself with the ways of Italian opera and Italian singing, he composed to Italian librettos six operas much influenced by those of Gioacchino Antonio Rossini. The last of these—II Crociato in Egitto (Venice 1824)—was a resounding triumph. Meyerbeer then spent some years in Paris perfecting his knowledge of French opera, the French language, and, above all, French declamation. The first fruit of this devotion was the opera Robert le Diable, produced at the Paris Opéra in Nov. 21, 1831. One of the greatest of all operatic successes, this spectacular work set the French (later international) taste for the grandest grand opera.

Robert le Diable was followed by Meyerbeer’s masterpiece, Les Huguenots (Opéra 1836), which, though coolly received at first, became even more popular. When it was staged at Berlin in 1842, Friedrich Wilhelm IV of Prussia appointed Meyerbeer general music director there, and he thereafter divided his time between Berlin and Paris. His German opera Ein Feldlager in Schlesien (1844) was a comparative failure until, in 1847, Jenny Lind won audiences as its heroine, Vielka. Le Prophète, the third of Meyerbeer’s French grand operas, was sung at the Paris Opéra in 1849. Five years later, the Opéra-Comique staged his L’Étoile du nord, parts of the score of which he had taken over from Ein Feldlager in Schlesien. The Opéra-Comique also produced his Le Pardon de Ploërmel, soon better known as Dinorah, in 1859. L’Africaine, the opera on which Meyerbeer had worked intermittently from 1838 on, was in rehearsal when he died ; it was triumphantly staged at the Opéra on April 28, 1865, one year after his death.

Meyerbeer’s purely musical gifts were notable, if eclectic; his mastery of technique was complete. But his long, almost unparalleled domination of the world of opera depended upon his unique ability to create—with the help of the expert librettist Augustin Eugène Scribe (1791-1861)—musical stage spectacles of ardent theatrical vitality which were also vehicles for great singers. All the most renowned stars of the second half of the 19th century delighted to perform in his operas, to the applause of eager audiences everywhere. Early in the 20th century, however, Meyerbeer’s operas fell into disuse. None of them, for example, was sung at the Metropolitan Opera House in New York between the 1933-1934 season and 1960, and any revival of them would require huge expenditures for staging and the special training of casts of phenomenally agile and expressive singers.

Meyerbeer’s nonoperatic music, much of it lacking vitality, is no longer played, although his incidental music for Struensee (1846), a tragic drama by his brother Michael Beer, has been considered one of his best works.