Who was Daniel? Information about Daniel, Hebrew Bible and the Book of Daniel. What is the story of Daniel in the Bible?

The Hebrew myths gathered round the sojourn of Daniel in Babylon were apocalyptie, a ‘revelation’ of what was going to happen in later times. The reversals of fortune experieneed by Israel cast a shadow of doubt over Yahweh’s plan for the chosen people, despite the warnings of the prophets Jeremiah and Ezekiel. Captivity in Babylon was a shock: Nebuchadnezzar had seized Jerusalem in 597 BC, when leading members of the community were taken away as prisoners, but the final sack of the city and mass deportation did not occur till 587 BC. Yahweh told the prophet Ezekiel that once the lesson of unrighteousness was learned, then as a shepherd he would gather together his exiled sheep and ‘bring them to their own land, and feed them upon the mountains of Israel by the rivers, and in all the inhabited places of the country’.

Predietion started to be worked out in history through Cyrus, King of the Persians, who captured the cities of Sippar and Babylon in 539 BC. As it was his policy to restore exiled peoples !o their own lands and encourage them in their traditional worship; the Hebrews had their opportunity to return to Jerusalem. This they did, but tribulation recurredafter the death of Alexander the Great, whose conquest of the Persian Empire left rich pickings for his generals, and ‘they brought untold miseries upon the world’, In particular the Seleucid ruler Antiochus Epiphanes (175-163 BC) drove them into open revolt. 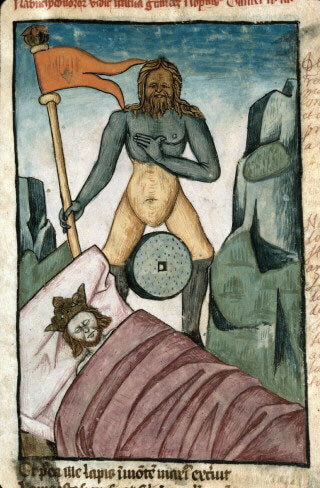 The Book of Daniel

The earliest example of apocalyptic literature, was propaganda written to comfert the Hebrews resisting the Hellenizing , policy of the Seleucids. lt concerns thediscomfiture of Nebuchadnezzar, the symbol of all oppression, and the vindication of Daniel as the true adherent of Yahweh.When Shadrach, Meshach, and Abednego refused to bow down before the king’s golden image, they were east into the fiery furnace, but they suffered ‘no hurt’ through the presence of a companion like the Son of God’. When mysterious handwriting appeared up on the wall of the palace during a feast given by Belshazzar, possibly a tributary king, the only person able to interpret the meaning was Daniel, who announced correctly the imminent rise of the Persians. When the devout interpreter of signs failed to obey a firman and continued to offer prayers to his proscribed deity, Daniel was east into a den of lions. But Yahweh ‘sent his angel and … shut the lions’ mouths’ so that he came to no harm. Though the vision of the future deseribed in the final chapters of The Book of Daniel contains amazing beasts with dreadful jaws filled with ‘great iron teeth’, the outstanding image is Nebuchadnezzar roaming the steppe as a wild animal. ‘He was driven from men, and did eat grass as oxen, and his body was wet with the dew of heaven, till his hairs were grown like eagles’ feathers, and his nails like birds’ claws.’

In another apocryphal book, Daniel, Bel, and the Snake, we have two accounts of Daniel’s success in unmasking priestiy deceitfulness. To Cyrus he demonstrared with the aid of ashes sprinkled on the temple floor that the footprints of those who came secretly to eat the food set out for Bel belonged to ‘the priests, with their wives and children’. He also disposed of a sacred serperıt by feeding it with cakes made from boiled ‘pitch and fat and hair’: these burst asunder its huge belly.