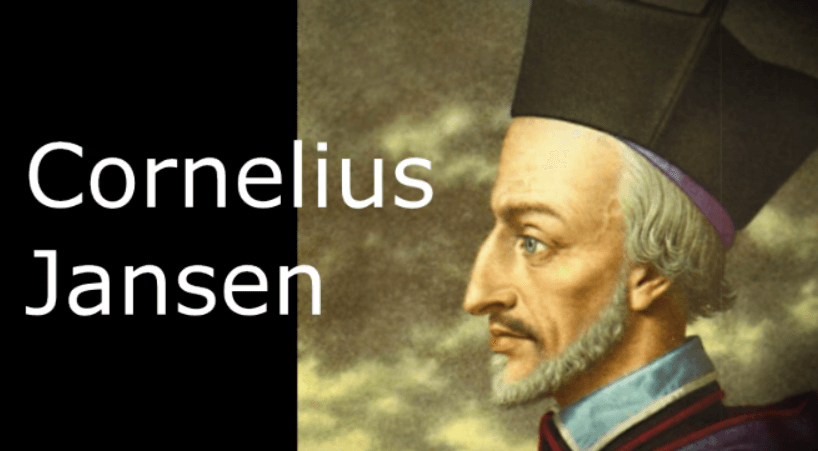 Cornelius Jansen; (1585-1638), Dutch theologian. He was born in Acquoi, near Leerdam, Holland, on Oct. 28, 1585. In 1602 he entered the University of Louvain in Belgium. He then transferred to the theological college of the university. Between 1604 and 1606 he began his collaboration with Jean Duvergier de Hauranne, abbot of St.-Cyran, seeking an answer to doctrinal questions raised by the Lutherans and Calvinists. The two spent some years in intensive study of Scripture and the church fathers, first in Paris and then at Bayonne.

Jansen returned to Louvain in 1617, convinced that any reformation of Catholic dogmatic and moral theology must be based on a return to the true doctrine of St. Augustine regarding grace and salvation. Two years after obtaining his doctorate in theology, he was made the head of a new college for Dutch students at Louvain and was soon widely known for his commentaries on Scripture and his polemical writings. Jansen took part in the university’s resistance to the Jesuits, who conducted a theological school in fierce rivalry with Louvain’s official faculty of divinity.

He twice went to Spain, which then governed Belgium, to plead the cause of the university against the Jesuits. Largely through his efforts, their permission to teach humanities and philosophy at Louvain was rescinded.

In 1635, Jansen published a pamphlet titled Mars Gallicus, which attacked Richelieu for allying France with the Protestants of Sweden, Holland, and Germany against the Catholic sovereign of Spain. On the recommendation of the. Spanish king and of the archbishop of Mechlin, Jansen was made bishop of Ypres in 1636. His administrative labors were heavy, but he succeeded in completing a theological treatise, the Augustinus, which laid down the principles of the Jansenist doctrine.

Jansen died of the plague on May 6. 1638, in Ypres, in the good graces of the church. However, his Augustinus, published two years after his death, was declared heretical for its acceptance of predestination and its teaching that grace is reserved only to the elect.