Charles Augustus Lindbergh (February 4, 1902 – August 26, 1974), American aviator, who was the first man to fly the Atlantic Ocean solo and, simultaneously, the first to fly from New York to Paris in a heavier-than-air craft. The flight took place on May 20-21, 1927. For the next 14 years Lindbergh was the best-known and best-loved private citizen in the world—a remarkable phenomenon because the adulation endured so long in an era of short-lived fads and because, in an age of press agentry, it occurred without manufactured publicity.

Lindbergh was born in Detroit, Mich., on Feb. 4, 1902, the only son of Charles Augustus Lindbergh, and died of cancer in Kipahulu, Maui, Hawaii, on Aug. 26, 1974. Charles Lindbergh’s strong-willed parents were often apart, and Charles was raised more by his mother, Evangeline Land Lindbergh, a science teacher, than by his father. He attended 11 schools and was an indifferent student. After graduating from high school in Little Falls, Minn., in 1918, he spent two years running his father’s farm. 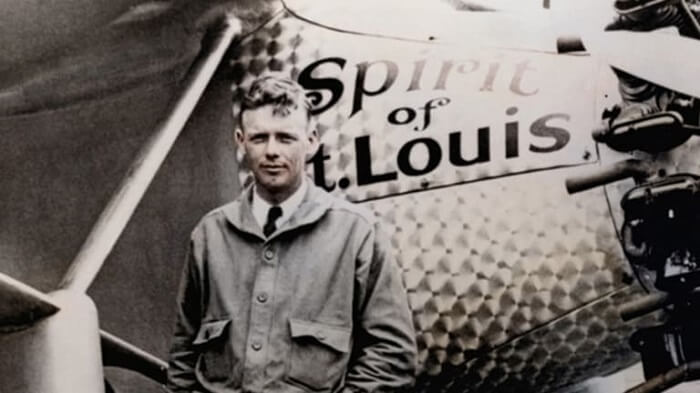 Enamored of flying since childhood, he wanted to study aeronautical engineering but settled for civil engineering at the University of Wisconsin. He dropped out during his sophomore year to enter a flying school in Lincoln, Nebr. Tall and thin, he was nicknamed “Slim” by the pilots. He apprenticed himself to a barnstorming pilot as a wingwalker and parachute jumper but did not solo until he bought his first plane, a war-surplus Jenny trainer, in 1923. He barnstormed for nearly a year before entering the U. S. Army flying school at Brooks Field, San Antonio, Texas, in 1924. Graduating first in his class in 1925, he was commissioned 2d lieutenant in the Army Air Service Beserve.

Briefly a pilot for an airmail line, Lindbergh left to try for the $25,000 Orteig Prize for the first nonstop New York-France flight. Financed by a group of St. Louis businessmen, he helped design a plane—the famous Spirit of St. Louis— in which he set a California-New York speed record. His historic flight across the Atlantic began when he took off from Roosevelt Field, Long Island, at 7:52 a. m. on May 20, 1927. He followed the great-circle route, over Nova Scotia, Newfoundland, and Ireland, a distance of some 3,600 miles (5,800 km). He carried five sandwiches and a quart of water, having omitted both parachute and radio to reduce weight in favor of more gasoline. Fighting fatigue all the way—he had been unable to sleep the night before the flight—Lindbergh arrived at Le Bourget airport at 10:22 p. m. Paris time on May 21, 33 V2 hours after leaving New York. He received a tumultuous welcome.

Returning from France aboard a U. S. Navy cruiser sent by President Coolidge, Lindbergh was widely feted. Now the symbol of aviation, he made a number of long, difficult demonstration flights. In Mexico he met Anne Spencer Morrow, daughter of U. S. Ambassador Dwight W. Morrow. They were married in 1929. Consultant to two U. S. airlines, Lindbergh made international exploratory flights with his wife.

Their first of six children—Charles A. Lindbergh, Jr.—was born in 1930 and kidnapped and killed in 1932. Bruno Richard Hauptmann, a carpenter, was convicted of the crime and electrocuted. Congress passed a law against kidnapping. ( See Lindbergh Act. ) To escape incessant publicity, the Lindberghs moved to England in 1935. From 1930 to 1938, Lindbergh worked with the surgeon Dr. Alexis Carrel to develop a perfusion pump in which animal organs can live outside the body, and he obtained support for Robert Goddard, the rocketry pioneer.

World War II and After

At the request of the U. S. military attaché in Berlin, Lindbergh made several trips to Nazi Germany to observe and report on the development of the German air force. He unwittingly accepted a German medal from Reichsmarschall Hermann Goering but later refused to give it back.

Returning to the United States in 1939, Lindbergh became an antiwar activist with the America First Committee. A speech he made in Des Moines, Iowa, in 1941, called anti-Semitic, ended his effectiveness. Named, in effect, a traitor by President Franklin D. Roosevelt in 1941, Lindbergh resigned his colonel’s commission.

bat missions in the Pacific theater as a civilian. After the war, he worked as a consultant for Pan American World Airways. President Eisenhower awarded him the rank of brigadier general in the Air Force Reserve in 1954. A conservationist, Lindbergh sought to aid primitive tribes and endangered animal species.

Lindbergh recounted his early life in We (1927) and more fully in The Spirit of St. Louis (1953), which received a Pulitzer Prize.