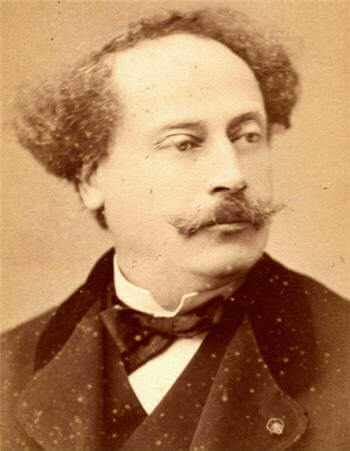 Alexandre Dumas (Dumas Fils); (1824-1895), called Dumas fils, French writer, who is most famous as the author of the play commonly called Camille. His many plays enjoyed great success in France in the second half of the 19th century and were widely read in Russia, England, and the Scandinavian countries. Although his own life was not above reproach, he felt it his duty to preach a stern morality in his plays, and, like all plays with too obvious a didactic purpose, they tend to be heavy-handed and lacking in humor and poetical suggestion.

Dumas was born in Paris on July 27, 1824, the illegitimate son of Alexandre Dumas Père and a seamstress he had seduced when he arrived in Paris as a young man. Dumas fils never forgave his father for the profligate life he led. He inherited his father’s dramatic talent, but cultivated it with more arduous reflection and a more searching critical spirit. After Dumas fils was elected to the French Academy in 1874, he never ceased assigning a moral purpose to literature. He died at Marly-le-Roi on Nov. 27, 1895.

Writings. In 1848, Dumas scored a wide success with his novel La dame aux camélias, which in 1852 he turned into the play of the same name. ( It is best known in English as Camille. ) During the Second Empire he became convinced that European society was becoming more corrupt as it became wealthier, and he wrote turgid prefaces to his plays to make their moral intentions more obvious. He stood against the emancipation of women, against prostitution and adultery, and for the sacredness of the marriage bond.

Dumas’ most striking plays, after Camille, were Le demi-monde (1855), in which he vituperated against women who were content to be déclassées; La question d’argent (1857), a satire on greedy financiers; Le fils naturel (1858); and Francillon (1887), a plea for husbands no less than wives to be bound by the law of fidelity. His plays mix a realistic portrayal of life, which had already invaded the novel, with an indefatigable moral purpose.