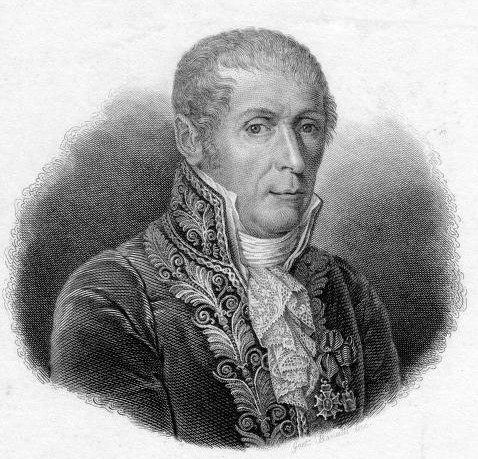 Alessandro Volta; Italian physicist, chemist, and discoverer of constant-current electricity: b. Como, Italy, Feb. 18, 1745; d. there, March 5, 1827. His first electrical publications, in which he described improved electrometers, appeared in 1769 and 1771. He became professor of physics at Como in 1774 and five years later professor of natural philosophy at Pavia, where he remained for 25 years. Volta made improvements in the electrophorus in 1777 and in the electroscope. After analyzing marsh gas he published his most popular treatise, Lettere sull aria infiammabile delle paludi (1776); and another paper on an improved electroscope appeared in 1782. A series of inventions followed, including an eudiometer, an electric pistol, and a lamp that burned inflammable air.

Prompted by Luigi Galvani’s treatise on animal electricity (1791), Volta commenced a new series of experiments that resulted in his an-nouncement on March 20, 1800, of his discovery of the “voltaic pile,” the first source of constant-current electricity. He communicated the results of his work to the Royal Society of London, which published the experiments in its Philosophical Transactions in 1800. With this he and other scientists decomposed water by electrolysis, electroplated precious metals, formed the electromagnet, and thereby opened the electrical age.

At the invitation of Napoleon I, Volta went to Paris in 1801 and performed experiments before the Institut de France. To honor the occasion a gold medal was struck, a sum of 6,000 francs was awarded to him, and a commission was created to repeat his experiments. He also was granted the title of count and made a senatör of the kingdom of Lombardy; later he received the Cross of the Legion of Honor.

Volta’s publications appeared in the Giornale Fisico-Medico and the Scelta d’Opuscoli, as well as the aforementioned Transactions of the Royal Society of London, which elected him a fellow in 1791 and presented him the Copley medal in 1794. His published works were collected in five volumes in 1816 and in seven volumes in 1918-1929. The volt, the unit of electromotive force, was named in his honor in 1881.