Edward Coley Burne-Jones (1833-1898), English painter and designer, who was a follower of the Pre-Raphaelite brotherhood and a major figure in the arts and crafts movement. His style, which influenced Aubrey Reardsley and the art nouveau movement, has a dreamy elegance akin to the late work of Dante Gabriel Rossetti, but lacks Rossetti’s vigor and detail. 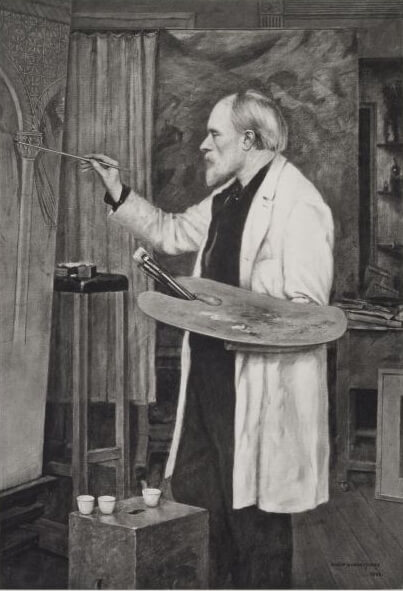 Burne-Jones was born in Birmingham on Aug. 28, 1833. At Exeter College, Oxford, he became an enduring friend of William Morris, with whom he shared an enthusiasm for medieval legends, especially Malory’s Le Morte Darthur, and for the artistic theories of John Ruskin. In 1856, Burne-Jones left Oxford for London to study with Rossetti, under whose direction he worked on the frescoes for the debating hall at Oxford.

Sienese art, with its linear patterns and rhythms and its jewel-like colors, made a strong impression on Burne-Jones when he visited ïtaly for the first time in 1859. His own paintings during this period were mostly water-colors. Among the best examples are Sidonia von Bork and Clara von Bork, both painted in 1860 and now in the Tate Gallery, London.

Gradually Burne-Jones abandoned watercolor for oils. His reputation in this medium was made in 1877, when eight of his paintings were shown at the opening of the Grosvenor Gallery, London. Among his most famous later works are The Golden Stairs (1880; Tate Gallery), King Cophetua and the Beggar Maid (1884; Tate Gallery), and The Star of Bethlehem (1891; Birmingham City Museum and Art Gallery).

In the decorative arts Burne-Jones had a far-reaching influence through his association with Morris and the Kelmscott Press. From 1861 on, he designed many stained glass windows, among the best of which are those at Christ Church, Oxford; Salisbury Cathedral; and the Cathedral of Birmingham. He also designed mosaic decorations for the American Church in Rome and several tapestries. His book illustrations for the Kelmscott Press include the 1897 edition of Works of Geoffrey Chaucer.