The legend of St. George was first told in England by crusaders returning from the Holy Land (Palestine) where they had been fighting the heathen. 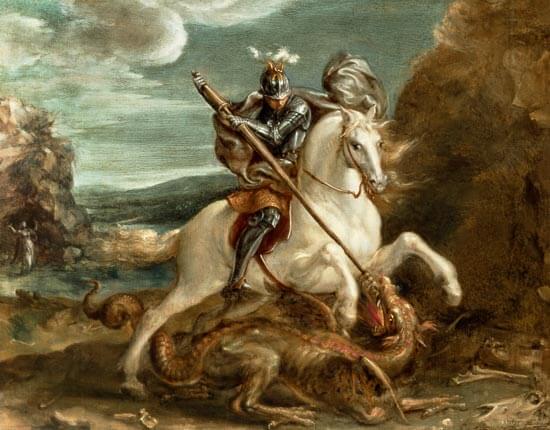 Long ago, the legend said, a terrible dragon was ravaging the countryside, and the people were obliged to send someone to its lair each day as a sacrifice. Every day someone was chosen, until it was the turn of the king’s daughter to be the victim. As she waited for the dragon to appear, George, a Christian, rode by. She told him about the dragon and he prepared to attack it. The dragon appeared and George, after making the sign of the cross, ran it through with his spear. Then, fastening the princess’s girdle round the dragon’s neck, he told her to lead it into the town, where he cut off its head in full view of the crowds that had gathered. He told them that he had killed it with God’s help, and all the people rejoiced and became Christians.

Almost nothing is known of the real life of St. George. He is said to have been born somewhere in Asia Minor in the 3rd century a.d. and to have been martyred, or put to death for his religion. It was more than 200 years later that his deeds became famous and his name honoured. 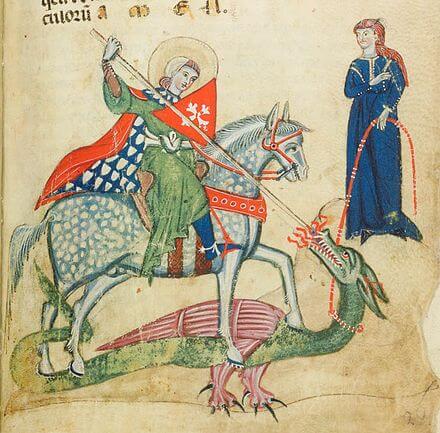 He was made the patron saint of England during the reign of Edward III and patron of the Order of the Garter, an order of knighthood founded by the same king. St. George’s banner, a red cross on a white ground, was first used in England by Richard I and now forms part of the Union Jack. The feast day of St. George is on April 23, and he is also the patron saint of Portugal.