Richard Phillips Feynman (1918- February 15, 1988), American physicist, who shared the 1965 Nobel Prize in physics (with Julian Schwinger and Shinichiro Tomonaga ) for his development of the relativistic theory of quantum electrodynamics. This theory, worked out in the 1940’s and published by Feynman in 1948, deals with the interaction of electromagnetic radiation with charged subatomic particles. In his work on the theory Feynman invented a diagrammatic calculatory technique that greatly simplified many calculations dealing with quantum mechanical interactions, This technique relies on diagrams that are now widely known as “Feynman diagrams.” 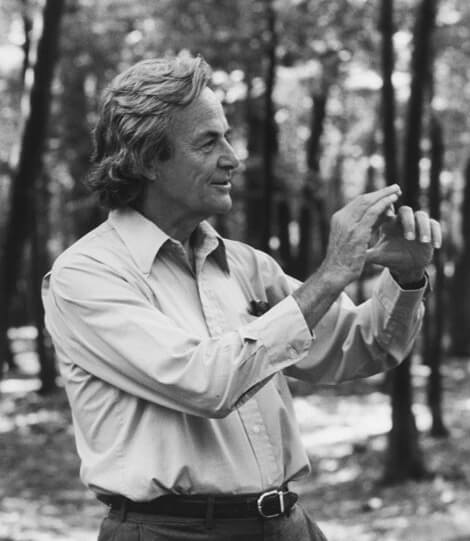 Feynman was born in New York City on May ll, 1918. He took a B. S. at the Massachusetts Institute of Technology in 1939 and a Ph.D. at Princeton University in 1942. During the early stages of the Manhattan Project he worked on the separation of uranium-235 from uranium-238. In 1942 he went to the Los Alamos Laboratory to work on the U. S. atomic bomb project. Feynman taught physics at Cornell University from 1945 to 1950; he then became Tolman professor of physics at the Califomia Institute of Technology.

Feynman’s later work included a study, undertaken in the early 1950’s, of the properties of liquid helium, which interested him because it offered one of the few cases in which quantum behavior could be observed macroscopically. He recognized that its properties were incompletely explained by the theory then prevalent and that it could be deseribed more fundamentally. In his work on liquid helium Feynman proposed the existence, later confirmed, of a “partide” of energy that he called the vortex exciton.

In 1957, Feynman, with Murray Gell-Mann, proposed the current theory (independently worked out at the same time by two other physicists) of weak interactions among subatomic particles. Such interactions are responsible for the spontaneous radioactivity of atomic nucleic, Their theory explained the “weak” magnetism observed in radioactive decay of nuclei, In the 1960’s, Feynman and Cell-Mann hypothesized a theoretical partide, called the “quark,” which would be fundamental to all the known subatomic particles.