Lucius Cornelius Sulla; (138-78 B. c.), Roman general and dictator. Bom of an obscure patrician family, he grew up in circumstances of near poverty. But high mtellect, leaming, and ambition brought Sulla to the attention of Roman leaders.

In 107 B. C., the great general, Marius, took him as his quaestor to Africa. There Sulla effected the capture of the Numidian king Jugurtha in 105. Coming under the wing of other political leaders, Sulla broke with Marius by ostentatiously advertising his role in Jugurtha’s capture, He reached the praetorship probably in 97 and served a promagistracy in Asia Minor, where he checked the advance of Mithndates VI, King of Pontus.

Sulla’s military repute was further enhanced by victories over Italian insurgents during the Social War of 90-89. These triumphs gained him not- only a loyal army but also a marital alliance with Rome’s leading senatonal family, the Metelli. In 88, consequently, Sulla attained the consulship, an office denied his family for many generations. 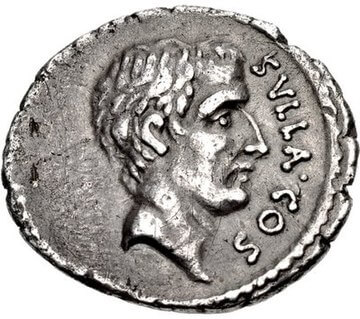 Campaign in the East:

When Mithndates overran the Roman province of Asia, Sulla was appointed by the senate to assume command of the campaign against him. But Marius was also eager for the job and nursed vengeance against Sulla. Through an alliance with the tribune Sulpicius Rufus, he contrived to have the command transferred to himself.

Sulla led his troops directly into Rome, intimidated the senate, forced repeal of Sulpicius’ laws, and took control of the city. Sulpicius was slain, and Marius and other enemies of Sulla Bed into exile, it was the first occasion in Rome’s history that one of its own generals had marched Roman troops on the capital itself. Without effective opposition in Rome, he now moved against Mithridates.

Sulla’ s forces drove the Pontic king out of Greece in 86, but only af ter bitter fighting during which Athens suffered the greatest bloodbath in its long history. Sulla then pursued Mithridates into Asia Minor but was not eager to prolong hostilities. In 85 he offered Mithridates lenient terms that were accepted.

During Sulla’s absence, his political enemies obtained ascendancy in Rome. Marius had perished in 86, but the govemment was now in the hands of Sulla’s opponents Lucius Cinna and Cnaeus Carbo. In 83, Sulla retumed to Italy and began a brutal civil war. The superiority of his forces won him additional recruits and caused major desertions from the opposing camp. A string of victories culminated in the bloody battle of the Colline Cate outside Rome in 82. Sulla was now master of Rome. He was appointed to an extraordinary dictatorship and set about reconstructing the shattered state. The dictator was unforgiving toward defeated and recalcitrant foes. Some ltalian towns and individuals were stripped of citizenship. Proscription lists were drawn up, designating men for execution, exile, or confiscation of property. These ruthless acts cast a pall over an eritire generation.

Sulla then turned his attention to constitutional reform. In this area he appears in a very different light. His changes were generally intelligent and aimed at stability. Sulla doubled the size of the senate, thus making it more representative ‘of a larger populace. He also increased the number of magistracies and fixed an order in which they were to be held. Powers of the tribunes were curtailed to limit their disruptive activities, and the corn dole was abolished to discourage an idle proletariat. Most important, Sulla overhauled Rome’s judicial structure, defined criminal offenses in detail, and organized a whole system of permanent criminal courts.

In 79, however, Sulla resigned his dictatorship and retired into private life. Scholars have long puzzled over his motives. Some see the retirement as a reluetant withdrawal, forced by political enemies who thwarted Sulla’s aims of installing a permanent monarchy, Others regard him as a sineere champion of aristocratic government who voluntarily retired af ter he had restored control by the senate.

Perhaps the best guess is that of the Creek historian Appian: Sulla was weary of war, of power, and of the city. He went off to the countryside with a new young bride. A year later, he died, of unknown causes, in Campania, leaving behind twin offspring, Faustus and Fausta Sulla.