Leonhard Euler; (1707-1783), Swiss mathematician. One of the greatest and most prolific mathematicians of all time, he made important contributions to practically every area of pure and applied mathematics. 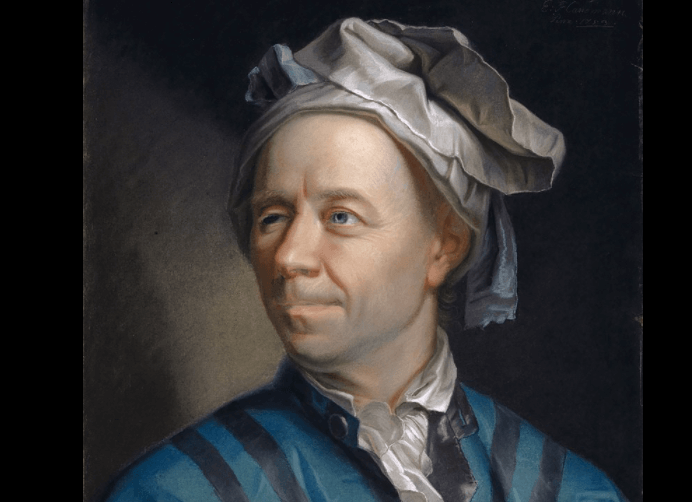 Leonhard Euler was born in Basel on April 15, 1707. His father, a Protestant minister, wanted him to follow in his footsteps. Euler entered the University of Basel in 1720 and began studying theology but gave it up for mathematics. In 1727, denied a professorship at Basel, he left for Russia, joining his friends Daniel and Nicolaus Bernoulli at the Academy of Sciences in St. Petersburg. He was soon contributing articles to the academy’s Commentarii. By 1738, when he lost the sight of his right eye, he had completed many works, including the Mechanica (1736), which presented Newtonian dynamics in analytic form for the first time.

In 1741, Euler accepted an invitation from Frederick the Great to move to Berlin, where he remained for 25 years. During this period he served in administrative, advisory, and research capacities for both the Berlin and St. Petersburg academies. While in Berlin, Euler wrote well over 200 articles and 3 treatises on analysis as well as his popular Letters to a German Princess (1768-1772).

In 1766, Euler returned to Russia because of religious and philosophic differences with his patron, who termed him a “mathematical Cyclops.” Euler became totally blind in 1771, but loss of sight did not lessen his output, which included writings on optics, algebra, and the theory of the moon’s motion. Even after his death, on Sept. 18, 1783, in St. Petersburg, his articles continued to appear in Commentarii for almost another 50 years.

Euler’s work ranged over many fields, but his influence was preeminent in analysis. Although his definition of a function was less precise than that now accepted, he was responsible for making the function concept and notation fundamental in analysis. He established the modern form and notation for the trigonometric and logarithmic functions, linking them through the “Euler equations” e^ix = cos x ± i sin x. In complex analysis, he anticipated the discovery of the Cauchy-Riemann- equations, and he developed the simplifications of equations of second-order surfaces and the study of extrema of functions of several variables, as well as numerous methods in the solution of differential equations. His general methods for surfaces and isoperimetric problems led to the development of differential geometry and the calculus of variations. He even contributed a basic result, “Euler’s polyhedral formula,” to modern topology, a field that did not become an established area of mathematical research until the 20th century. His works are expected to fill 75 volumes.