John Foster DULLES (1888-1959), American diplomat and public official. As secretary of state (1953-1959) during the administration of President Dwight D. Eisenhower, he insisted that the United States stand firm against the threat of Communist aggression.

Dulles was born in Washington, D.C., on Feb. 25, 1888, the son of the Rev. Allen Macy Dulles and Edith Foster Dulles. He was a grandson of John Watson Foster, who served as secretary of state under Benjamin Harrison, and a nephew of Robert Lansing, one of Woodrow Wilson’s secretaries of state. As a young man, Dulles was attracted to the ministry, but in 1907 his grandfather took him to the Hague Conference, where Dulles, then only 19, served as secretary to the Chinese delegation. This marked the beginning of a career in international law and diplomacy spanning 52 years. 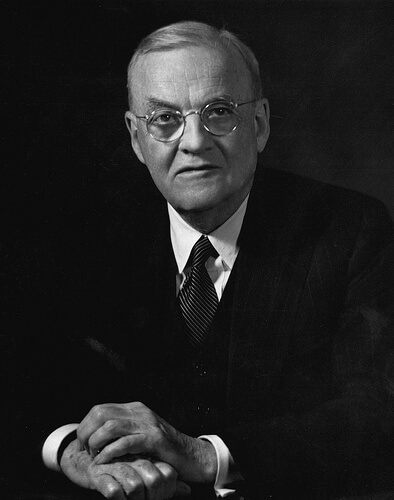 Dulles was educated at Princeton (B.A., 1908), the Sorbonne (Paris), and George Washington University (LL.B., 1911). He was admitted to the New York bar in 1911 and joined the law firm of Sullivan and Cromwell in New York City. During World War I he served with the War Trade Board, and in 1919 he was counsel to the United States delegation to the Reparations Commission at Versailles. He then rejoined Sullivan and Cromwell and soon became one of the nation’s leading international lawyers and a financial adviser to several foreign governments.

He was a United States delegate to the San Francisco Conference in 1945 and to the United Nations General Assembly in 1946, 1947, 1948, and 1950. He also served as special adviser to the secretary of state at the Councils of Foreign Ministers in London (1945), Moscow (1947), and Paris (1949). In July 1949 he was appointed by Gov. Thomas E. Dewey of New York to fill a vacancy in the U.S. Senate, but he lost the seat in a special election in November. In 1951, as a representative of President Harry S Truman, with the rank of ambassador, he was chief negotiator of the peace treaty with Japan.

On Jan. 21, 1953, Dulles entered the Eisenhower cabinet as secretary of state. He occupied that post until serious illness compelled him to resign on April 15, 1959. He died in Washington on May 24, 1959.

Dulles’ 60 trips abroad and nearly 500,000 miles (800,000 km) of flying to and from conferences during his six years in office made him the most traveled of all American secretaries of state up to his time. He was also the most controversial. In a magazine article published in 1956, he was quoted as saying that the Eisenhower administration had walked three times to the “brink of war” and that the ability to get to the verge and yet sidestep war was a “necessary art” of diplomacy. These statements at once became issues of intensive debate. He also coined the phrase “massive retaliation” in a reference to the role of atomic weapons as the mainstay of the West’s defense against attack.

Throughout his tour of service, Dulles tended to define political problems in moral terms. In his view, communism was a moral evil; therefore it was wrong to compromise with it; and, because it was evil, the forces of righteousness would inevitably triumph. He successfully insisted on quick action in the U.N. Assembly to halt the Anglo-French and Israeli armed attacks on Egypt in the fall of 1956. Following his deepest conviction, he always stood ready to put the full force of American power behind any free country menaced by aggression, and he clearly believed that the Soviet Union and Communist China should never be permitted to misjudge the determination of the United States to defend the world’s freedom. After his resignation, many of his critics joined his supporters in praising him for his personal courage and for his contribution of firmness and resolution to the Western alliance.