James Abram Garfield;(1831-1881), 20th president of the United States. Four months after taking office he was wounded fatally by an assassin’s bullet. His administration is remembered for a struggle over patronage, exposure of the Star Route frauds, and the beginnings of a friendlier policy toward Latin America. Had Garfield never been president his distinguished service in the House of Representatives would have earned him a place in American history.

James Abram Garfield was born in a log cabin near Cleveland, Ohio, on Nov. 19, 1831, the youngest of five children of Abram and Eliza Ballou Garfield. Raised by his mother, who was widowed in 1833, James grew up in poverty. Though bright and anxious to learn, he turned 17 with but little schooling. In 1848 he struck out on his own and worked on a canal boat, but about six weeks later he returned home seriously ill. While convalescing he decided to get an education.

For the next decade religion and academic life occupied Garfield. He attended a seminary, taught in district schools, and from 1851 to 1854 studied and taught at the Western Reserve Eclectic Institute, now Hiram College. Through these years Garfield was an introspective person with narrow views and a small circle of friends. Deeply religious, he zealously embraced and preached the doctrines of the Disciples of Christ. From the Eclectic, a Disciple school, he entered Williams College. He graduated with honors in 1856.

Garfield returned to Hiram, became principal of the Eclectic in 1858, and instilled new life into the school. He preached, officiated at marriages and funerals, and lectured. During these years Garfield turned against slavery and became interested in politics. In 1859 he was elected as a Republican to the Ohio Senate, where he denounced slavery and secession, advocating force, if needed, to preserve the Union. He studied law and was admitted to the bar. In 1858 he married Lucretia Rudolph, a former classmate. 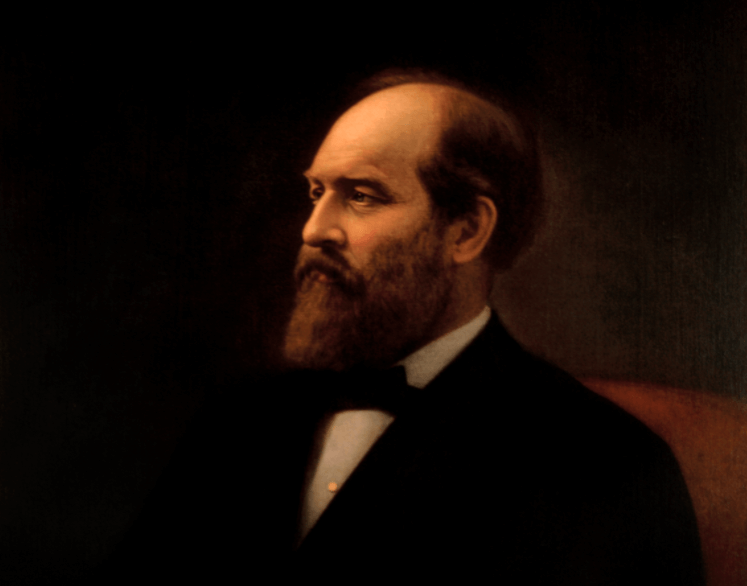 In the Civil War Garfield rose from lieutenant colonel to major general. He provided superb military leadership, demonstrating a sound understanding of tactics, strategy, and the relationship between war and politics. From the outset he favored emancipation of the slaves and conquest of the South.

His initial battlefield assignment was at the head of a brigade that drove invading Confederates from eastern Kentucky. He led another brigade in the Shiloh and Corinth campaigns, after which he returned home on sick leave.

In 1863, Garfield became chief of staff to General William S. Rosecrans, commander of the Army of the Cumberland, and served through the Tullahoma and Chickamauga campaigns. After the Battle of Chickamauga, in which he performed heroically, Garfield resigned his commission to enter the U. S. House of Representatives, to which he had been elected in 1862.

Garfield served in the House from 1863 to 1880. He was broadly intelligent, national in outlook, and generally moderate in his views. He tempered idealism with practicality. He worked hard and spoke and wrote well. From 1871 to 1875 he was chairman of the committee on appropriations.

During Reconstruction, Garfield sided with the Radical Republicans in supporting Negro suffrage, congressional Reconstruction, and the impeachment of President Andrew Johnson. But events gradually convinced him that progress in the South would come only with education, business enterprise, and time.

An articulate defender of a conservative monetary policy, Garfield urged the resumption of specie payments and the payment of government debts in coin. Although he opposed the coinage of overvalued silver, he became interested in the possibility of a sound bimetallic standard.

Garfield was a moderate protectionist, looking to the time when American industry would be competitive without tariff supports. His record enabled his party to make protection for home industry a leading issue in 1880.

Garfield believed that in education lay the great hope of a democracy. He was the House leader in establishing the U. S. Department (later Bureau) of Education. He supported the education of deaf persons, served as a regent of the Smithsonian Institution, and helped to create the U. S. Geological Survey.

On three occasions Garfield was widely criticized for actions that seemed to reflect on his integrity as a public man. These incidents, the most famous of which was the Crédit Mobilier scandal, should not obscure a notable congressional career. Today it appears that his weaknesses were largely of judgment rather than character.

Garfield helped elect Rutherford B. Hayes president, serving on the electoral commission formed to settle the disputed election of 1876. During the Hayes administration he was minority leader of the House. In January 1880 he was elected to the U. S. Senate.

But Garfield never had a chance to take his Senate seat. In May 1880 he was a delegate to the Republican National Convention. A well-known party leader for whom a presidential movement was already afoot, he attracted much favorable attention. Garfield placed John Sherman’s name in nomination for president. After 34 ballots had failed to nominate either Ulysses S. Grant, James G. Blaine, or Sherman, the supporters of Blaine and Sherman united on Garfield, who won on the 36th ballot.

Garfield’s humble origin, his political record, his conduct as a candidate, a vigorous Republican campaign, and the political inexperience of his rival brought a narrow victory.

The new president was a large man, six feet tall and weighing 210 pounds. He had light brown hair and a beard flecked with gray. His months in the White House, though few, were busy and dramatic. Office seekers descended in droves. A struggle over New York political appointments developed between the President and Senator Roscoe Conkling, New York’s Republican chieftain, and Garfield’s victory in it enhanced his prestige and strengthened the presidential power. Exposure of the Star Route frauds, involving mail contracts in the West, created a sensation. Under Garfield’s direction Secretary of State James G. Blaine began to lay foundations for improved relations with Latin America. Developments seemed to foreshadow a vigorous and able administration.

On July 2, 1881, Garfield was shot in a Washington railroad station. The assassin, Charles J. Guiteau, was a mentally unbalanced man who had unsuccessfully sought a federal appointment.

The President died at Elberon, N. J., on September 19. Seldom had Americans felt such public grief and indignation. The grief momentarily made Garfield appear greater than he was. The indignation hastened civil service reform, which Garfield himself had for some time advocated.