Babe Ruth; (1895-1948), American baseball player. A powerful man, he hit 714 home runs during 22 seasons in the major leagues, a spectacular feat that revolutionized the game. Ruth was born in Baltimore, Md., in Feb. 6, 1895. He learned to play baseball at St. Mary’s Industrial School in Baltimore, where he was sent when he was seven years old. He began his professional career with the Baltimore team in the International League in 1914, but before the close of the season he was sold to the Boston Red Sox of the American League. He became a notable left handed pitcher, but because of his prowess as a hitter he frequently was played at first base or in the outfield to insure his presence in the lineup. In 1919 he hit 29 home runs, regarded then as a remarkable feat. On Jan. 3, 1920, he was sold to the New York Yankees of the American League for $125,000. 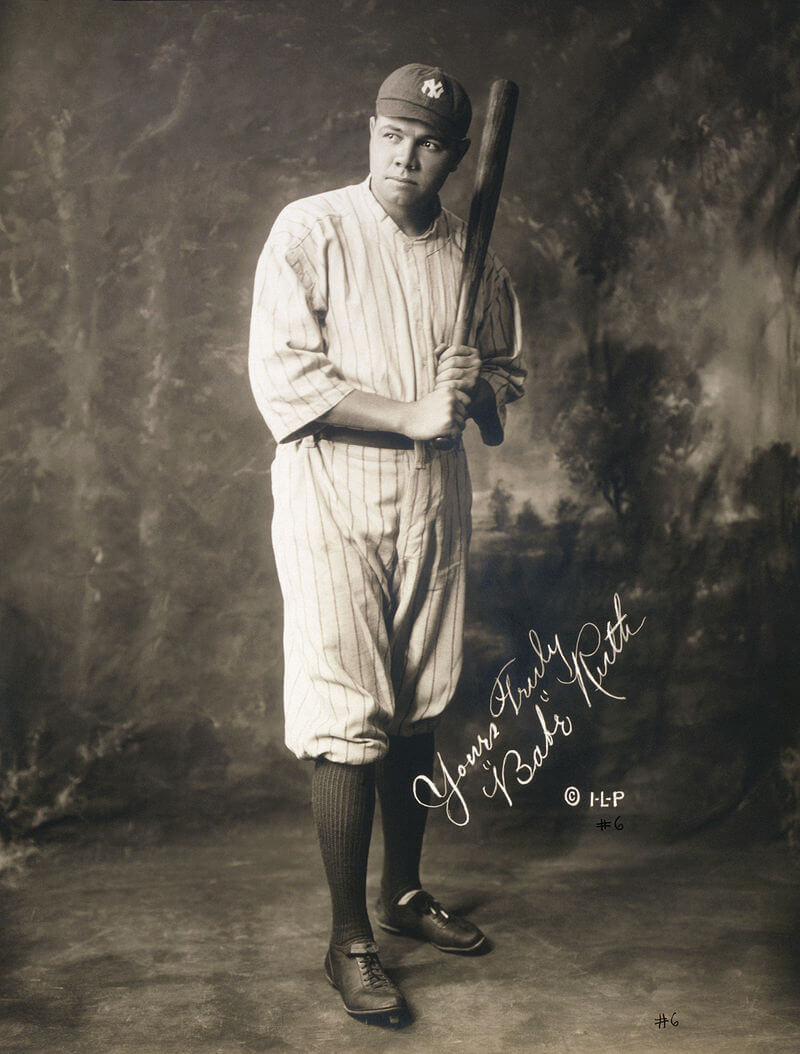 In his 15 years with the Yankees, where he usually played right field, he dominated professional baseball. His lefthanded slugging, always aiming at a home nın, became the universal fashion, displacing the strategy of finesse. Although many followed his style, no one during his era approached his record of 714 home runs. He also hit 15 home runs in the 10 World Series in which he participated. He hit more than 50 in four different years; his peak was 60 in 1927. His lifetime batting average was .342. During his career he set or tied 76 batting or pitching records.

He was the greatest crowd attraction in baseball, and the highest paid player of his time. His tap salary was $80,000 a year in 1930 and 1931. He left the Yankees after the 1934 season and shifted to the National League, playing brielly with the Boston Braves in 1935 and ending his activity as a coach with the Brooklyn Dodgers in 1938.

Statistics cannot describe Ruth’ s impact on baseball. His thunderous hitting captured the publıc’ s imagination and restored its faith in the professional game, which had been severely shaken by the “Black Sox ” World Series scandal of 1919. In 1936 he was one of the first players chosen for the baseball hall of fame.

Ruth was a tall man with a massive chest and shoulders and remarkably slender legs. His best weight was 215 pounds. His engaging simplicity and his theatrical gestures endeared him to millions. He was a bomb actor and struck out with as lusty and magnificent an air as he hit a home run. He was idolized particularly by children and returned their feelings warmly, often visiting hospitals with cheering words and gifts of autographed baseballs. A few years before his death in New York City on Aug. 16, 1948, he established the Babe Ruth Foundation for underprivileged children, and bequeathed a large part of his estate.