Who is Baal? Baal facts in Mythology. The Baal god and history, information and story.

Literal meaning:’lord’. In Canaan the old tide of local fertility gods. Baal did not emerge as a distinct rain god till comparatively late times, when he appears to have assumed the special functions of each. Although there is no equivalent in Canaan of the sterile, scorching summer drought found in Mesopotamia, the cycle of seasons is marked enough to have cimsed a concentration on the disappearing fertility gad, who trailed after him to the nether world the autumn rain clouds.

Having defeated the sea god Yam, built a house on Mount Saphon, and seized possession of numerous cities, Baal announced that he would no longer acknowledge the authority of Mat, ‘death’. Exduded from Baal’s hospitality and friendship, Mat was told to visit on earth only the deserts. In response to this challenge, Mat invited Baal to his abode in order to taste his own fare, mud. Terrified and unable to avoid the dreadful summons to the land of the dead, Baal coupled with a calf in order to strengthen himself for the impending ordeal, and then set out. 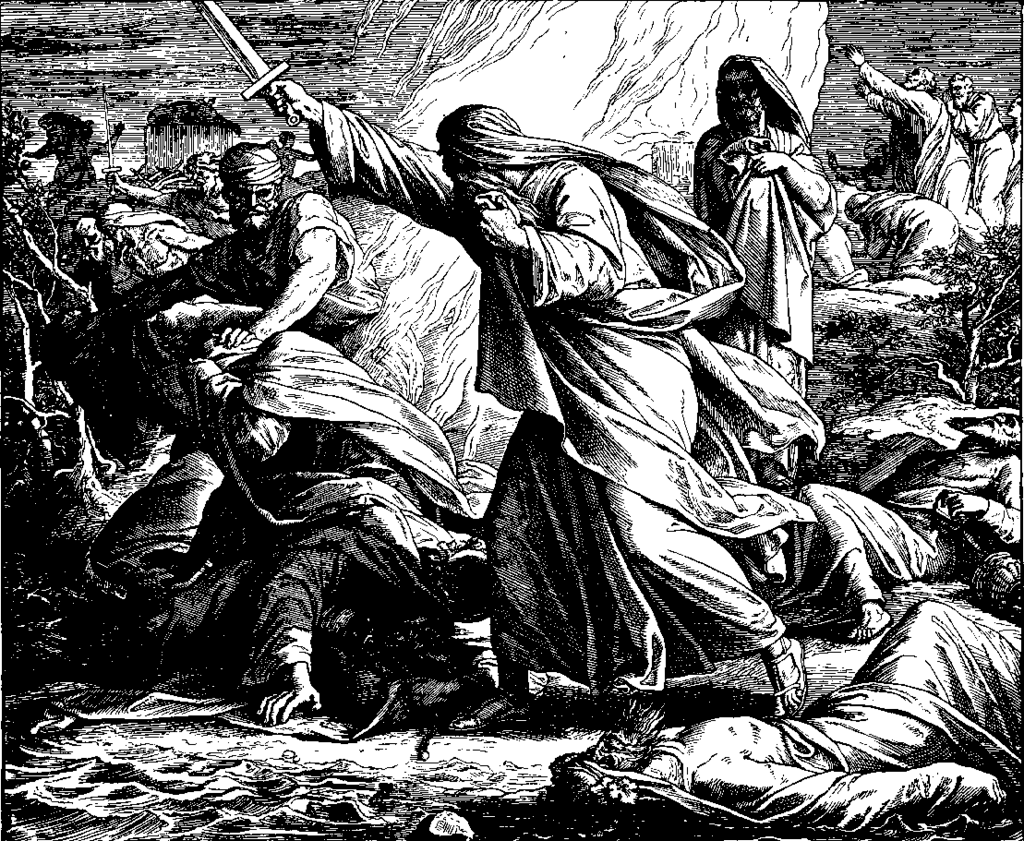 El and the other gods donned funeral garments, poured ashes on their heads, and mutilated their limbs, while Anat, aided by the sun gad des s Shapash, brought back the corpse for burial. El placed on the vacant throne of Baal the irrigation gad Athtar, but Anat sorely missed her dead husband and brother. Without avail she beseeched Mat to restore Baal to life, and her attempts to interest the other deities in the question were met with cautious indifference. Thus, Anat had to assault Mat, ripping him to pieces ‘with a sharp knife’, seattering his members ‘with a winnowing fan’, burning him ‘in a fire’, grinding him ‘ina mill’, and ‘over the fields strewing his remains’. Meanwhile in a dream El beheld a return to fertility, which suggested that Baal was not really dead, and he instructed Shapash to keep an eye open. for him on her daily travels. In due course Baal was discovered completely restored, and Athtar fled from his throne. Yet Mat was able to renew the attack and, though on this occasion all the gods supported Baal, neither combatant could gain the victory. At last, El intervened and dismissed Mot, leaving Baal in possession of the field.

This myth-fragments of which exist on the Ras Shamra tablets- relates to the alteration of the seasons. Baal is the god of rain, thunder, and lightning. ‘At the touch of his right hand, even cedars wilt.’ Yam, the owner of salt water, gaye place to Baal as the genius of rainfall and vegetation, a displacement that left Mot as the sole contender beneath mighty El.

Torrid heat, sterility, the arid desert, death, the nether world: these were Mot’s irresistible realm till Anat threshed, winnowed, and ground the harvested com, the fecundity of Baal’s land, just as the siding of El with the resurrected rain god at the dos e ensured the continuation of the annual cyde. A parallel of the magical rites involved can be found in Psalms, where ‘they that sow in tears shall reap in joy. He that goeth forth and weepeth, bearing precious seed, shall doubtless com e again with the rejoicing, bearing sheaves with him.’ This is sympathetic magic: the tears shed were expected to induce drops of rain.

Baal was son of El, or Dagon, an obscure deity linked by the Hebrews with the Philistine city of Ashdod. Dagon may have been associated with the sea -a coin found in the vicinity portrays a god with a fishtail. Although Baal himself overcame Yam, it is uncertain whether or not he fought Lotan, the Leviathan of the Old Testament, but we know that Anat ‘crushed the writhing serpent, the accused one of the seven heads’. Another echo of Mesopotamian thought patterns occurs in the reasons advanced by Baal for needing a ‘house’.

His food offerings were too meagre for a god ‘that rides on the douds’. As far apart as Carthage and Palmyra there were temples dedicated to Baal-Hammon, ‘the lord of the altar of incense’ whom the Greeks identified with Kronos. On Mount Carmel it was the prophet Elijah who discredited King Ahab’s belief in the power of Baal, when at his request “the fire of the Lord fell, and consumed the burnt sacrifice. and the wood, and the stones, and the dust, and licked up the water that was in the trench’. Afterwards Elijah had the people slay ‘the prophets of Baal’, thereby assuring the survival of Yahweh-worship in lsrael.