Where is Herculaneum ancient city? What is the history, city plan of Herculaneum? Information on Herculaneum town arts and history.

Herculaneum; was a city of ancient Italy, buried in the great eruption of Mt. Vesuvius in 79 a. d. It was situated about 5 miles (8 km) southeast of Naples on the lower slopes of Vesuvius. Its harbor was on the Bay of Naples. Sisenna, a Roman historian of the early 1st century b. c., states that the city stood on high ground, surrounded by walls and flanked by two streams. The population of Herculaneum at the time of its destruction is estimated to have been about 5,000.

The city was named for Hercules, its mythical founder. Its origins can be traced back to remote times. It is first mentioned in literature by Theophrastus, a Greek philosopher of the 4th century b. c. According to the Greek geographer Strabo*, it had been inhabited successively by Oscans, Etruscans, and Pelasgians. Toward the end of the 5th century b. c., Herculaneum was taken by the Samnites. It became a Roman municipality in 89 b. c., when it was conquered by the Romans in the Social War.

Herculaneum was severely damaged by an earthquake in 62 a. d. It was destroyed, along with Pompeii, Stabiae, and Oplontis, by the eruption of Mt. Vesuvius that began on the aftemoon of Aug. 24, 79 a. d. The city was invaded by a muddy torrent of lava and ashes, an outpouring that lasted for three days and covered Herculaneum entirely. It filled the streams and nearby harbor and raised the level of the terrain an average of 50 feet (15 meters). In time this layer of volcanic material became compact. The burial extensively damaged the structures of the town, but the constant humidity in the volcanic envelope preserved some of the organic materials, particularly wood.

In the Middle Ages the town of Resina was built on top of buried Herculaneum. Resina was renamed Ercolano (Herculaneum) in 1969.

The first archaeological discoveries at Herculaneum were made by chance in 1709. Systematic digging was started in 1738. Wells and tunnels were dug into the interior of the mass of volcanic material, and in this manner paintings, mosaics, sculptures, and other objects were brought to light. The Herculaneum Museum was set up in the royal palace of neighboring Portici to house the discoveries.

The first diggings aroused enormous interest. In Naples the Academy of Herculaneum was founded to further the study. Beginning in 1828, excavations were made at ground level in order to lay bare the city, as had been done at Pompeii. The work proceeded slowly, however, and was often interrupted. In 1927 the Italian government took charge of the enterprise. 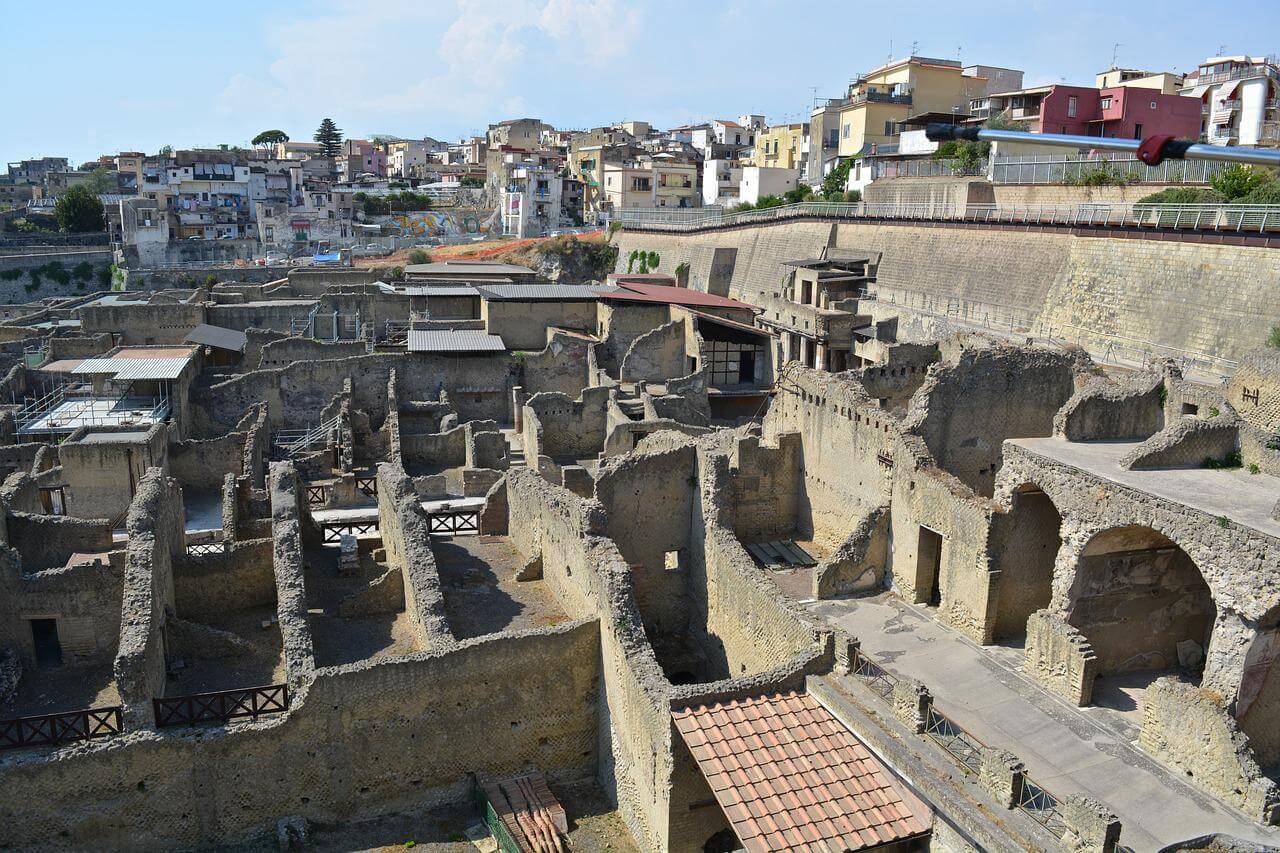 Herculaneum covered an area of approximately 1,215 by 1,050 feet (370 by 320 meters). The city was built on a regular plan with streets intersecting at right angles. The streets running north and south were called cardines; those running east and west were called decumani. The houses usually opened on the cardines. Not long before the town’s destruction, luxurious houses were built by the southern walls overlooking the bay. Outside the walls a sacred area was set aside, near which great baths were built. The surrounding region must have been dotted with suburban and country villas. In one of these, the Villa of the Pisones, was found a collection of texts on papyrus and a collection of sculptures.

The center of Herculaneum was the decumanus maximus, which was the focus of daily city life, a role usually filled by the forum in most other Roman towns. Here some of the most important buildings have been identified: a great gymnasium, a chapel or seat of public officials, a sacred building (only partly excavated), and a basilica. A theater was situated in the northwest section of town, and baths were located along the decumanus inferior.

The private homes of Herculaneum are of special interest, for they show a wide variety of styles of construction. A rare example is the Latticework House, which contained small apartments for rent and a central patio. The House of the Beautiful Patio, built with a staircase leading from the central patio to the upper floor, is a precursor of medieval-type houses. Some of the private houses in Herculaneum are believed to have had two upper stories.

There are also notable examples of houses with an atrium (an interior court surrounded by rooms). Some of these are of relatively ancient construction, such as the House with the Wooden Partition, the Samnite House, and the House of Neptune and Amphitrite. Of unusual design are the great villas in the southem part of the city, including the House of Argo, the House of the Hostelry, the House of the Mosaic Atrium, and the House of the Deer. In these houses the traditional plan is modified. The peristilia (colonnaded courtyards), the gardens, reception halls, and other rooms were oriented toward the south in order to take advantage of the view toward the sea.

In addition to the private houses there are stores, which reveal many interesting details of Herculaneum’s daily life. In one such store were found great wooden shelves with wine casks and cereal containers still well preserved. In a store on the decumanus maximus a collection of glassware was found, with the glass objects still packed in their shipping crates. 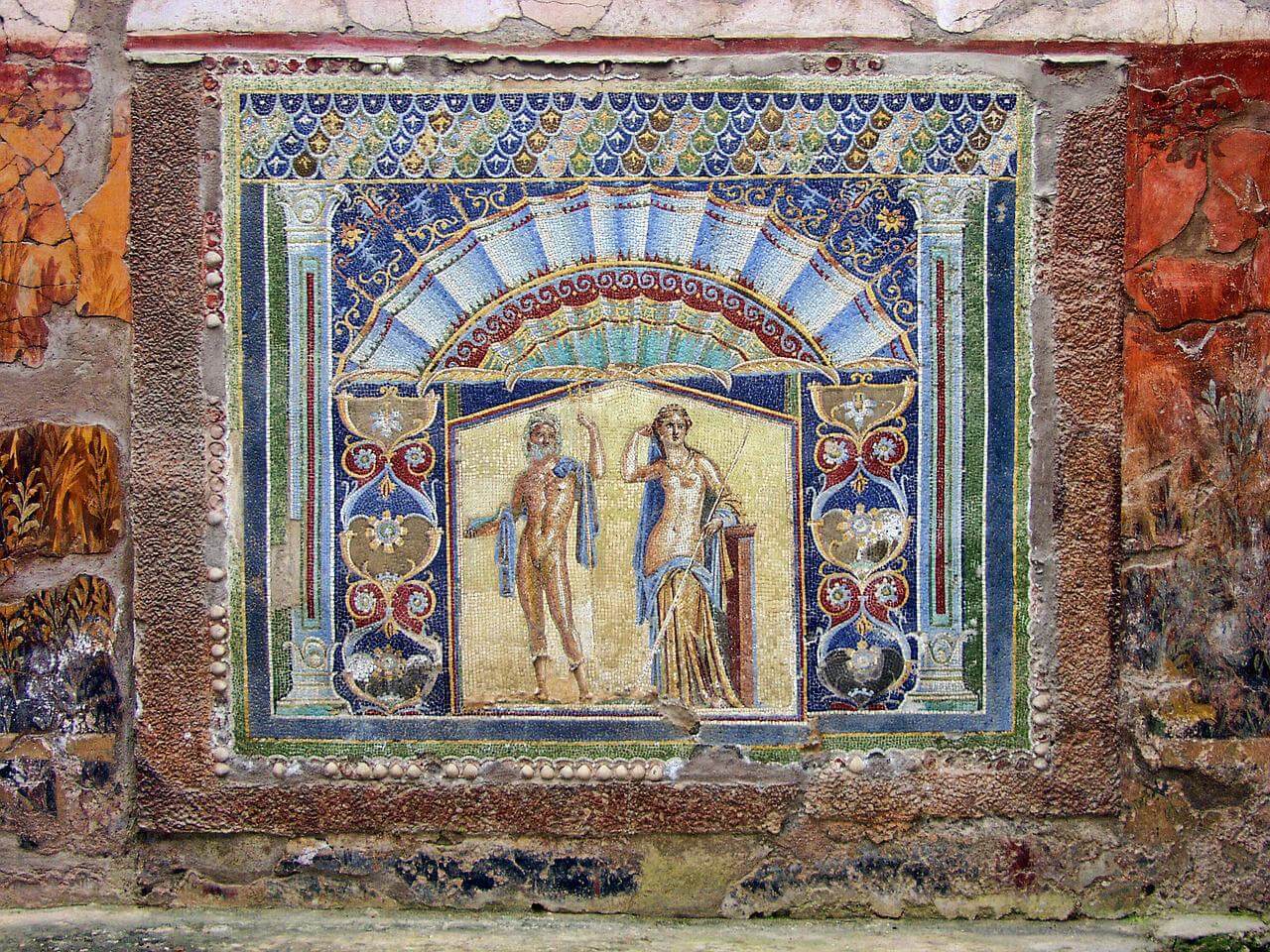 Herculaneum is famous for the art works that have been excavated. The earliest excavations, in the 18th century, unearthed many paintings in the theater and basilica. Among these are paintings of Hercules and Telephus, Achilles and Chiron, and Theseus and the Minotaur, which are now in the Museo Nazionale in Naples. The paintings, like those of Pompeii, have retained their vivid colors. The Herculaneum paintings are often more artistic in execution than those found in Pompeii.

The excavators also found many notable statues. Best known are Dancing Girls, Hermes Resting, The Drunken Satyr, The Sleeping Faun, and The Wrestlers. There are also sculpted heads of Dionysus, Berenice, and Sappho, a bust of the Roman general Scipio Africanus, and sculpted portraits of emperors and of citizens of Herculaneum. Even an Egyptian statue was found. Also in excellent taste are the many artifacts, such as bronze and terracotta vases, small votive statues, and lamps.

Most of these findings are in the museum in Naples, but in Herculaneum itself a small antiquarium has been established in the House of the Beautiful Patio.