What is emerald? What are the properties of emerald, the history of emerald. Information about emerald stone. 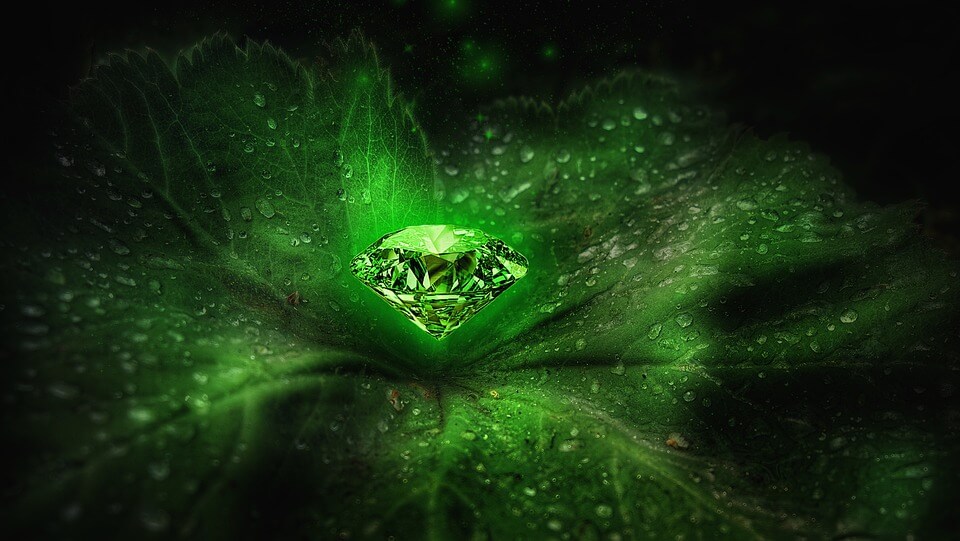 Emerald; is a rich green gemstone of the highest rank, second in value only to ruby and much more costly per carat than diamond or sapphire.

Emerald is a variety of the silicate mineral beryl. It does not form crystals as large as common beryl, and unlike aquamarine— another form of beryl—it is almost never clear. In fact its flaws are considered desirable and are often created on purpose in artificial emeralds. The gem also differs from other forms of beryl in having a better cleavage, so that it can be split in slices almost like a loaf of bread. However, it is fairly hard—7.5 on the Mohs’ scale— and fairly durable in jewelry.

The green color of emerald is caused by traces of chromium, and variations in the shade seem to be caused by slight amounts of vanadium or iron. Greenish aquamarine may look like a pale emerald, but it never contains any chromium.

As in the history of many gems, the original name “emerald” may not have been used for the same substance as today, but by the 16th century it had settled on green beryl. However, under other names, true emeralds were known in Babylonia almost as early as 4000 b. c. They were being mined in Egypt fully 4,000 years ago in what are called “Cleopatra’s mines,” rediscovered in 1818 about 100 miles (160 km) northeast of the present Aswan Dam.

The sources of fine emeralds are limited. Colombia, by far the most important, conducts emerald mining under tight government restrictions that permit only a small amount of high-quality stones to reach the market. Some of the emerald-bearing veins in Colombia run through black limestone and shale. Sometimes the gem crystals are even found loose in pockets of rock. The Siberian side of the Ural Mountains also yields good emeralds. Stones of varying quality are provided by South Africa, Rhodesia, Australia, and Brazil. Emeralds were probably mined in Austria and India in ancient times, but there is little production of the gems today. In the United States a few genuine emeralds have come from North Carolina. In general, the total output from places outside of South America—and perhaps the Soviet Union—seems to be of little importance.

Excellent progress has been made in the manufacture of synthetic emeralds having a strong resemblance to the natural stone. Most of these processes are secret, but the kinds of inclusions and the patterns of the colors suggest that some synthetic emeralds are made by hydrothermal (hot-water) methods and that some are made from molten material.