What is a sawfish? What are the features, characteristics of sawfish? Information and images of sawfish. 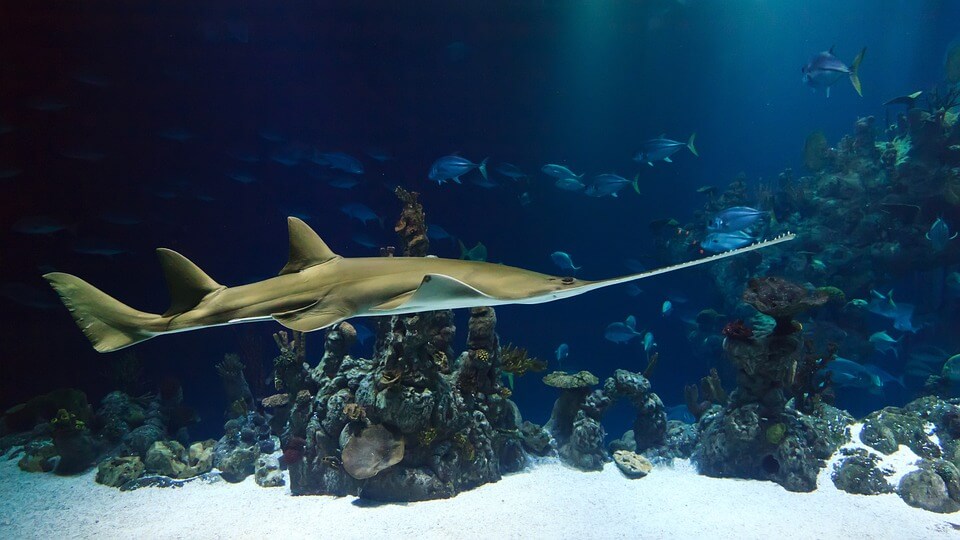 SAWFISH; any of a family of highly modified sharklike fishes characterized by a long flattened rostrum that is equipped with toothlike scales and resembles a saw. In addition to several fossil forms dating back to the Cretaceous Period, more than 70 million years ago, there are six living species, making up the genus Pristis, family Pristidae, of the order Raiiformes. The best-known species is the common sawfish, P. pectinatus, of the Gulf of Mexico and the Atlantic Ocean. It is usually considered large at 18 feet (5.5 meters), but specimens over 30 feet (9 meters) long and weighing more than 5,000 pounds (2,250 kg) have been reported. Other species live in warm seas throughout the world. All of them appear to ascend rivers for some distance, and specimens have been reported 200 miles (124 km) inland.

Sawfish frequently use their sawlike rostrums to slash through schools of small fishes, killing or stunning them, or to stir bottom-dwelling prey animals from their hiding places. They also use their saws in defense. Sawfish are ovovivi-parous, producing up to 27 living young at a time.

Sawfish are of little importance, either commercially or as sport fish. Their skin, like that of some sharks, produces shagreen, and the liver has a high yield of oil. The “saws” of sawfish are also sometimes sold as curios.