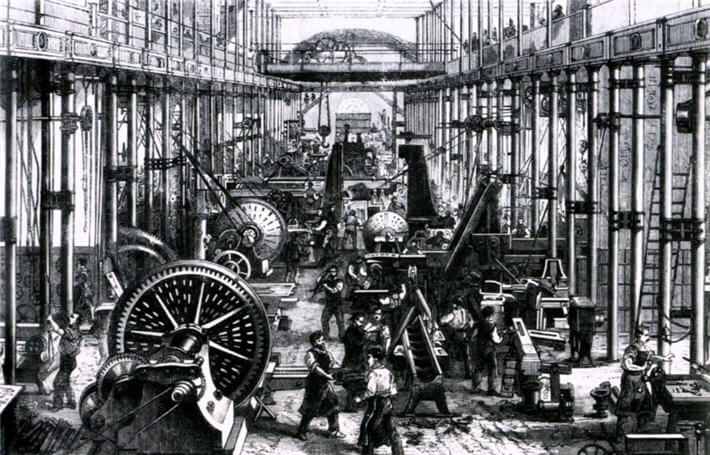 Understood as one of the most important revolutions in history, the Industrial Revolution keeps its relevance in the fact of the transformation that it meant in the lifestyle of societies around the world. The Industrial Revolution arose as a result of a long process of human creation and innovation that clearly demonstrates the importance of technology and the improvements that derive from it.

The Industrial Revolution is a very complex historical phenomenon but historians point to the emergence of mid-to-late eighteenth-century England, where numerous machines were created and put into operation to improve the system of production and that allowed not only to advance more quickly in the generation of elaborated products, but also are the direct cause of many other advances that are taken for granted today, for example transport, electricity, household appliances, etc., all essential for our quality of life.

During the Industrial Revolution, new machinery and tools were generated that would facilitate production and make it more abundant and cheaper (for example, the textile machines that allowed spinning much faster than a human did, at the same time having better and greater amount of fabrics ready to sell). But there were also important social and economic changes that may be observable to this day and that, unfortunately, have not all necessarily been positive as were the technological advances.

One of these profound socio-economic changes was the consolidation of a society divided between the owners of capital and the means of production (the owners of the factories, entrepreneurs) and those who possessed the labor force (that is, the workers and proletarians) . This elementary division that later thinkers like Karl Marx have taken to describe the capitalist society supposed an unequal access to the resources and the riches generated in the labor scope and not only a continuous exploitation of the man towards the man but also an increasing dependency of the human race towards technology, machines and other devices that slowly displaced workers and increased problems such as unemployment, delinquency and marginality. At the same time, when locating industrial production spaces (factories) in urban areas or in their outskirts, the growth of cities and their transformation into megalopolises is undoubtedly a direct consequence of this phenomenon.

For all this we must speak of the Industrial Revolution as one of the most important and significant revolutions in the history of modern human beings because it generated profound and irreversible changes in the quality of life of all human populations.