SACRAMENT, generally understood as a formal rite of the Christian church and a symbol of a spiritual reality.

The word “sacrament” is derived from the Latin sacramentum, which in its original use was employed for the oath taken following enrollment in the Roman armies. A legal use of the same word referred to a deposit made by those engaged in court action, with the understanding that the loser forfeited his sacramentum to the state treasury, which, as some suppose, employed the money for sacred purposes. The fact that the word, in its root and significance, suggests something set apart as holy, indicates that both the military and the legal sacramentum were regarded as having some religious character. 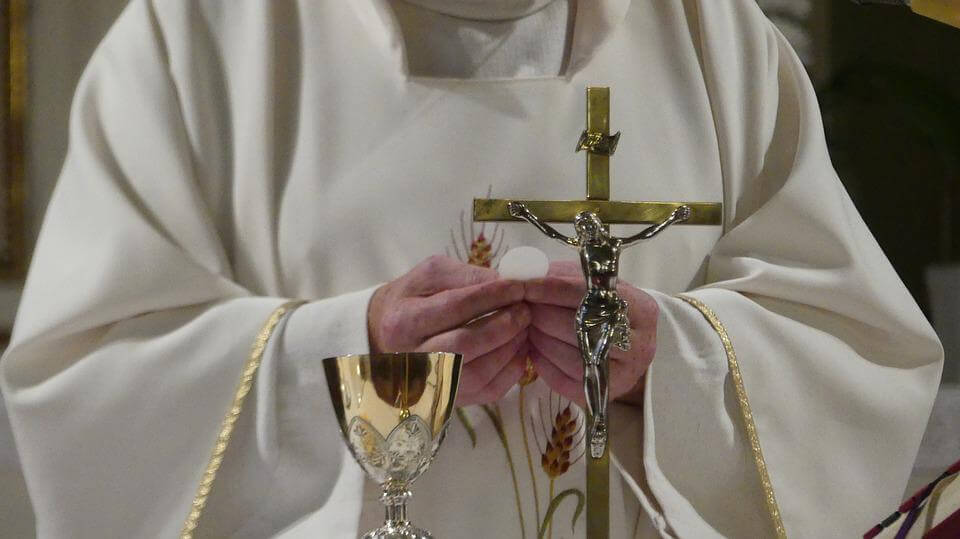 The term is more generally employed in contemporary usage to describe a sacred religious practice, although it can also have the connotation of a holy mystery. Hence, it is related to mysterion, the Greek term employed to describe some hidden truth or reality that is made known to men through the revelation of God. It is with its ecclesiastical usage, however, that this article is concerned, since that is the sense of the word in ordinary speech.

In this connection the term “sacrament” can be used in a general or in a narrower meaning. In the former, it is defined by St. Augustine as signum sacrum or signum rei sacrae (sacred sign or sign of a sacred reality), a definition that has been generally accepted by Christian theologians. The Anglican Book of Common Prayer gives a fuller statement, “an outward and visible sign of an inward and spiritual grace.” The sacramental idea suggests that there is a general principle running through the created world, in which corporeal or material things are the expressive media for unseen, but genuine, realities of a spiritual kind. Values, ideals, and purposes are operative in, and their reality is expressed through, such material and corporeal realities. Goodness is known and seen through good acts; beauty, through beautiful objects; love, through loving persons. More significantly, it is said that God is known in this fashion. Saint Thomas Aquinas wrote: “Through signs that can be perceived by the senses, the mind is stimulated in its aim towards God.” Catholic Christianity (the ancient, undivided Christian Church and those churches—such as the Anglican, Roman, and Eastern Orthodox—that claim continuity with it) has maintained that the normal means for reaching the divine Reality is through such sacramental impressions of God.

Physical contacts, material realities, things done in the realm of the visible, tangible, corporeal, or sensible, are for Catholic Christianity the most effective way in which states of mind, attitudes, beliefs, and certainties of many sorts may be stimulated and even inaugurated, as well as deepened and enriched. Central in this pattern of material expression of spiritual reality is the Incarnation of God in Christ, in which it is believed that God employed, sacramentally, a human life as his means of selfexpression in the created order.

Definition According to Rite.

When this general sense of the word “sacrament” is restricted to the ecclesiastical rites of worship, the definition of Hugh of St. Victor is adequate: “a corporeal or material element offered to tlıe senses, which from likeness represents, from institution signifles, and from consecration contains, some invisible and spiritual grace.” This definition includes four points that have generally been maintained as essential to a sacrament:

(1) The sacrament must have a sign that is a visible reality. This may be the pouring of water, as in Baptism; the bread and wine of the Lord’s Supper, Holy Communion, or Mass; the layingon of hands, as in ordination and confirmation.

(2) Further, the sacrament must have some spiritual grace or gift, which is conveyed to the faithful recipient. In Baptism this is forgiveness of sin and incorporation into the Church of Christ; in the Lord’s Supper, the body and blood of Christ; in Ordination, the grace of ministry; in Confirmation, the strengthening for responsible Christian life.

(3) The sacrament must in some sense have been divinely instituted. It cannot be a mere human invention, but in one way or another must have attached to it the promise of the divine purpose, whether by explicit institution, as in the Last Supper of Jesus with his disciples, the Holy Communion, or by some more gentral direction which has led to such a rite, as in the Unction of the sick.

(4) Finally the sacrament must be efficacious in that it conveys or contains that which it professes to do. The view is held in Catholic Christianity that sacramental rites are not merely edificatory or teaching signs but actually effect some result through their performance.

Sacraments as Symbol and Instrument.

From the definition quoted above from Hugh of St. Victor, the phrases “from likeness represents and from institution signifies” introduce another set of ideas that have, especially in recent years, been much emphasized by theologians, particularly Anglicans, such as Oliver Chase Quick: a sacrament is both a symbol and an instrument. By symbol is meant that there is in a sacramental rite some likeness that, in Hugh’s phrase, “represents” what is being commemorated or conveyed.

Hence the bread and the wine in the Eucharist from likeness represent the body and blood of Christ, in this instance by divine institution; or in Baptism, the pouring of water represents, from likeness, the washing away of sin (dirt), which soils the personality of the recipient. On the other hand, the sacrament is not merely symbolic, since it is a sign that effects what it symbolizes. It is thus instrumental.

To some degree this notion of the sacrament rests back upon the Aristotelian conception of “efficient cause,” and is suggested by Aquinas in his general discussion of the subject in the Summa Theologica where he uses the illustration of a woodman’s ax effectual in felling a tree. The Reformed theologians of the 16th century were divided on this matter, some resting content with a merely significatory understanding of the sacrament, and others, as in England, insisting that a sacrament is an “effectual sign.”

Throughout Christian history the problem of the number of ecclesiastical sacraments has been a matter of theological discussion. Ali Christians, except the Society of Friends, have accepted Baptism and the Eucharist as sacraments “generally necessary to salvation,” in the sense that their use is the normal way of admission to, and participation in, the benefits of Christ, although there have been widely differing interpretations of the sense in which this is true. On the other hand, Catholic Christianity, in both eastern and western forms, has said that there are five other rites, of a sacramental nature, that may properly be called sacraments. These are: Confirmation; Marriage; Absolution, or Penance; Holy Orders, or the rite of settingapart for the ministry; and Unction, or the Anointing of tlıe sick or dying. It was not until the Middle Ages that the number was set at seven, and even this does not provide for the variety of less formal rites and actions or objects which in western Catholicism are called sacramentals.

Meaning of the Sacraments.

In the full scheme of seven sacraments, certain of the group are believed to be effective in conveying character or status in the relation of the recipient to God and Christ. In Baptism, the person receiving the sacrament is made a member of the Body of Christ, the Church; in Confirmation, he is given the special status of a communicant; and in Ordination, he receives the position of an ordained person with particular rights that attach to this office. In this meaning of character the three sacraments are said to be “indelible”; that is, they can never be repeated because the status that has been granted is a permanent status. Protestant theologians have tended to deny this view, especially as regards Ordination, but in the Anglican Church, the Roman Catholic, and Eastern Orthodox churches it has usually been held.

Finally, the more traditional Christian view is that the sacraments are effectual apart from the moral character of the minister. This is the basic meaning of the concept of their operation ex opere operato. The Anglican Articles of Religion state this in the phrase: “That the unworthiness of the minister hindereth not the sacraments.” In this way, it is said, tlıe recipient is not dependent upon the intangible factor of ministerial holiness or intention. However, it is always considered necessary that a minister shall have at least this much by way of “intention”; he shall purpose to do what the church itself intends, even if his understanding of this is not complete. The suiîîcient guarantee that he so intends is his use of the normal matter and form that the church has prescribed and the fact that he is himself a properly authorized person to perform the rite.

The interpretation of sacraments differs in the various Christian denominations and churches. The outline already given is in general that of Catholic Christianity, including the Anglican Communion. The Reformed churches of the continent of Europe, with their offspring in other parts of the world, have variations on this view. Calvinism and Lutheranism, as well as the followers of Zwingli (the Reformed Church, properly speaking), have tended to take a less systematic view, holding that the efficacy of the sacraments is due to the blessing of Christ and that the formalized scheme is not necessary for an understanding of their operation. In some of these groups, great emphasis is placed on the faith of the recipient. However, ali Christians have maintained that, in one way or another, “faith is the means whereby we receive the sacrament.”

It is important to observe, however, that in recent years there has been a much stronger emphasis, throughout Christianity, on the importance of the sacramental idea in general and the significance of sacramental rites within the Christian Church. This has been associated with the liturgical movement of the Roman Catholic Church and with similar movements found in other denominations.