What Is Rodeo? Information about rodeo, rodeo Competitive events and the history of rodeo.

The modern rodeo is a colorful spectacle that attracts large crowds in the western half of the United States and major Eastern and Southern cities. It is also regularly seen in Canada, where the famed Calgary Stampede is held annually, and in Australia. The extraordinary skills required of the contestants, as well as the inherent danger in such events as bronco riding and bull riding, make rodeo one of the most exciting spectator sports. 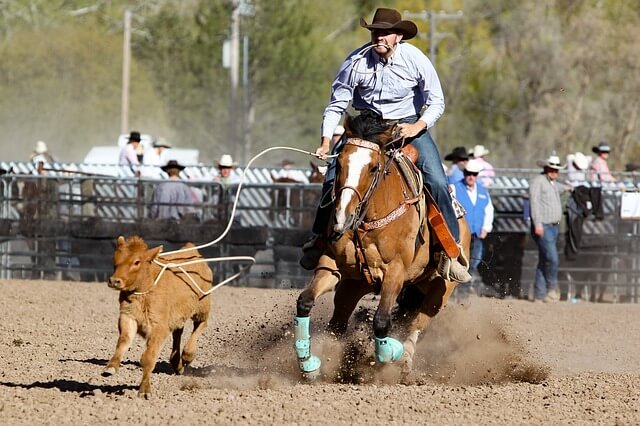 Although the word is of Spanish origin—meaning a gathering place of cattle, or a marketplace for cattle—rodeo is perhaps the most genuinely American of all sports. Although both basketball and baseball were also devised and first played in the United States, rodeo remains the only sport that is still uniquely American. This is not to say that its glamour and appeal have not found their way to far-flung places. Exhibitions of the cowboy art have been seen on every continent and in almost every important capital of the world. But, because of its origin in the heritage of the American West, rodeo has remained a product of its own beginning. 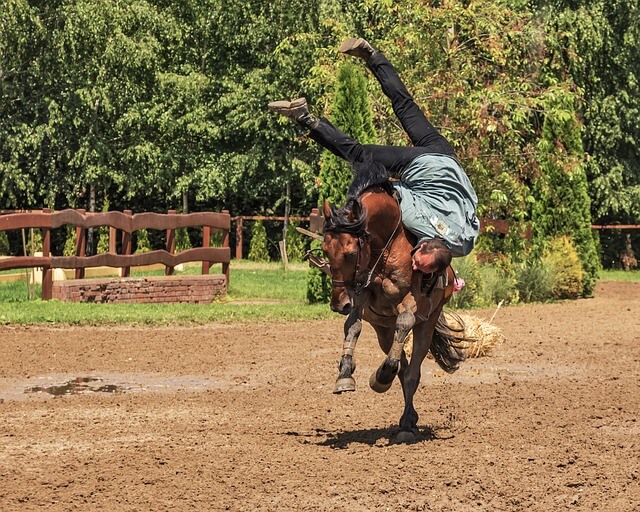 There is no way to pinpoint a definite beginning to rodeo. There obviously was an initial time in which ranch skills were combined into some sort of organized event, but that incident has been lost to history. The first rodeo probably occurred sometime in the 1880’s, and most likely was staged after completion of a cattle roundup. One can speculate that the first rodeo would have comprised saddle-bronc riding, calf roping, and steer busting—all part of the work-a-day world of the ordinary cowboy.

For the cowboy’s work, unlike that in most professions, provi ded a never-ending test of talent and skills. Topping off a rough bronc on a cold Montana morning or tail-busting a steer in the barranca country of southern Texas required a man who knew his occupation. Rodeo took its customs and challenges directly from those early days of the West. 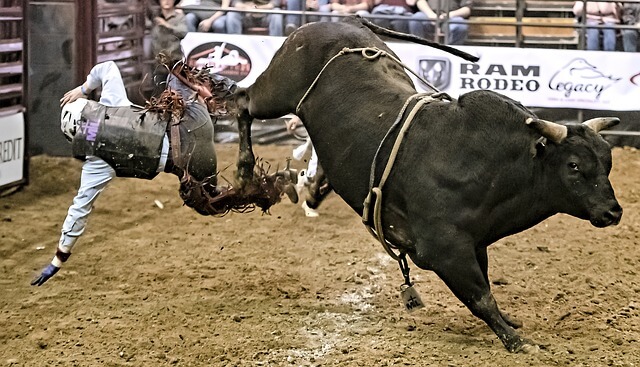 Other events, such as wild cow milking, team roping, ribbon racing, and steer decorating, occur as extra attractions in some rodeos.

The first event in a rodeo, by tradition, is bareback horse riding, in which a wild, untamed horse, or bronco, tries to buck the rider off its back. The contestant takes a one-handed grip on a rigging set just behind the point of the horse’s shoulders. The rigging is a light leather apparatus that cinches around the horse’s barrel. When the chute gate opens, the cowboy must pass the judges with both spurs in contact with the horse’s shoulders. This is called “marking,” and is required for a qualified ride. After that the cowboy must continually spur the horse in the shoulders, and he may not touch either himself or any part of the horse or the rigging with his free hand. The ride is scored on the basis of 50 points for how well the horse bucks and 50 points for the style and spurring ability of the rider. The event is judged over an 8- or 10-second period, after which time a pickup rider usually comes alongside and assists the cowboy to the ground. Obviously, if the cowboy is thrown from the horse during the time limit, his ride is disqualified. 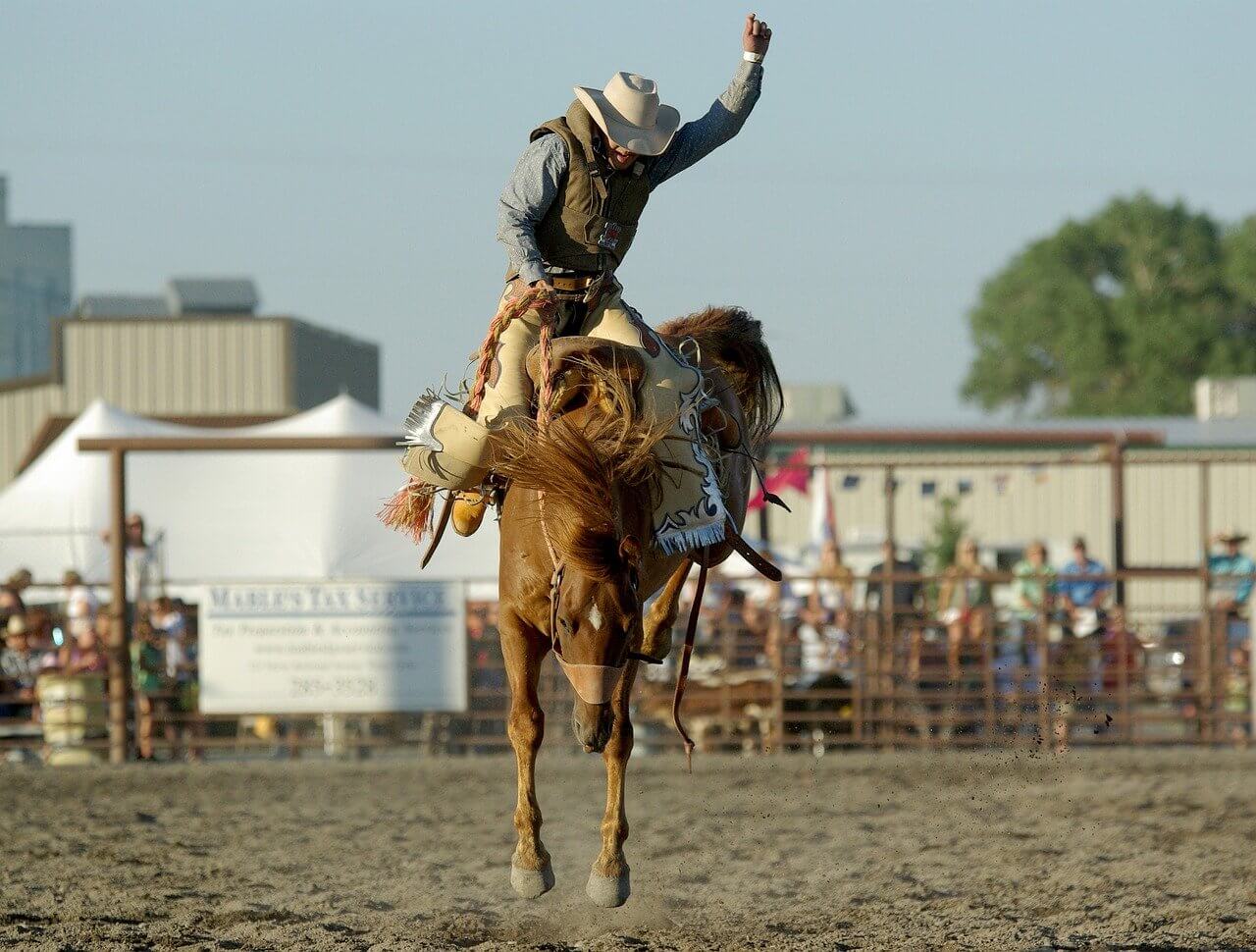 Easily the most dangerous event in rodeo is bull riding. This is so because of the size and ferocity of the adversary. A rodeo bull can sometimes weigh over 2,500 pounds (1,130 kg) and nearly always weighs at least a ton. The most common bull used in rodeo is the Brahma, which has long since forgotten its gentle beginnings as India’s sacred cow. Brahma bulls are especially noted for their strength and quickness. No spurring or marking is required of the cowboy in bull riding. He holds on to a bull-rope that encircles the animal’s barrel and then is wrapped around the cowboy’s hand. The only requirement is that the cowboy not touch anything with his free hand and that he stay aboard for the 10-second ride. Strength and balance are primary requirements for the cowboy in this event.

Calf roping, steer dogging, and women’s barrel racing are timed events in which the contestant tries to accomplish the goal in the shortest span of time. In calf roping the cowboy must rope and throw the animal and securely tie three legs together. Perhaps even more important than the cowboy’s skill is the ability of his horse, almost invariably of the quarter horse breed, which must put the cowboy quickly in position to throw his loop. When the calf is roped, the cowboy jumps off the horse, which then must maintain a strain on the rope while the cowboy is throwing and tying the calf. Good roping horses command prices in the tens of thousands of dollars.

A good horse is almost as important in steer dogging, although what is wanted here is quickness and an indefinable quality called “cow sense.” In this event the steer is released from a straight-ahead chute and the cowboy must quickly get alongside, being helped by a rider on the other side of the steer called a “hazer.” At the right moment the cowboy dives from his saddle, taking the steer—which usually weighs from 500 to 600 pounds (227-272 kg)-around the head and horns, stopping it by digging in with his boot heels, and then throwing it over. All of the steer’s four feet must be in the air before the red flag is dropped. 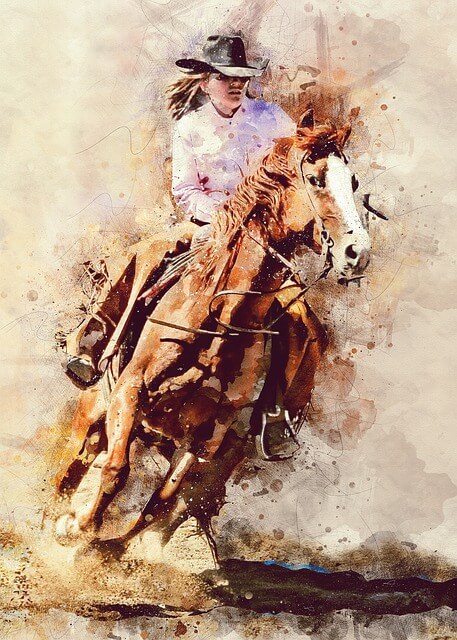 In womens barrel racing a cowgirl rides through a cloverleaf pattern of three barrels and then back across the line. Here, too, the ability of the horse is of paramount importance.