Leishmaniasis; is any infection with protozoa of the genus Leishmania. There are three recognized species in this genus, and although they look alike under the microscope they are biologically different and produce at least three different types of disease.

The most frequent form of leishmaniasis is caused by the organism L. tropica. It occurs in many parts of Africa and Asia, southern Europe, and Central and South America and is known as skin, or dermal, leishmaniasis, oriental score, Aleppo button, Delhi boil, or chiclero ulcer. It is characterized by one or more skin swellings of varying size. Eventually the swellings become open sores (ulcers) that leave scars after healing. Local treatment with dry ice or X rays can hasten the healing process, and if there are many sores, injections of antimony compounds or cycloguanil pamoate may be used. 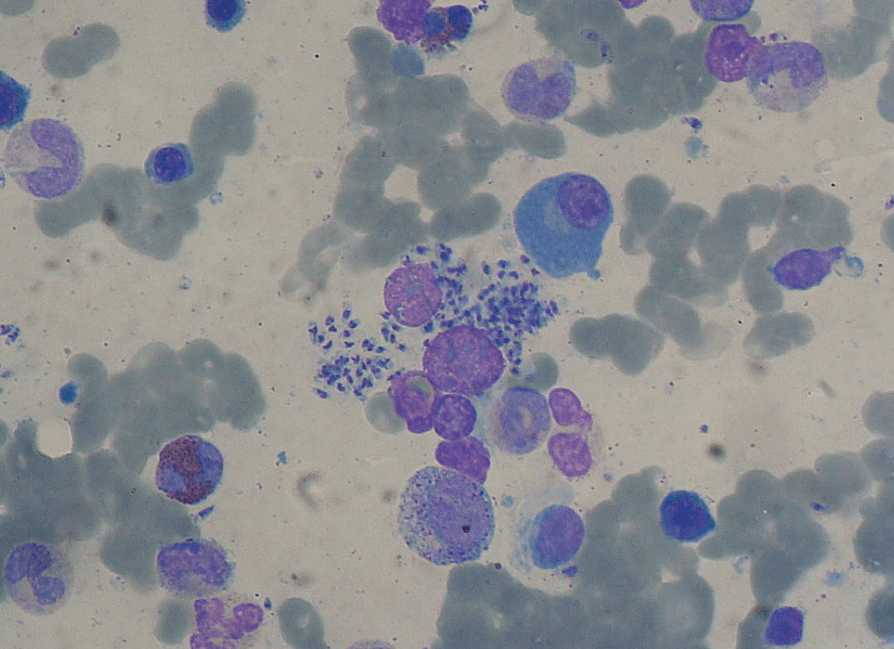 A second, more serious type of leishmaniasis is caused by L. brasiliensis and occurs only in rural arts of Central and South America. It is known by different local names, such as espundia in Brazil and uta in Peru. In this disease there are skin lesions similar to those in dermal leishmaniasis, but often there are also sores in the lining of the nose and mouth. These sores may be very deep, and the disease may be fatal. The disease can usually be controlled with injections of pentamidine or amphotericin B.

The third form of leishmaniasis, kala-azar, is caused by L. donovani. This disease affects the internal organs, chiefly the liver, spleen, bone marrow, and sometimes the lymph nodes. It was first recognized in India but also occurs in other parts of Asia, Africa, southern Europe, and sometimes South America. It is characterized by fever, by enlargement of the liver, spleen, and sometimes the lymph nodes, by a low white Wood cell count, and, in later stages of the disease, by a darkening of the skin.

Kala-azar can be cured with injections of antimony compounds, such as sodium antimony gluconate, or pentamidine. If not treated it is usually fatal after many months, death often resulting from bacterial infection due to the Patient’s lowered resistance caused by the reduced number of white blood cells.

The diagnosis of leishmaniasis is based on finding the causative protozoa in material extracted from affected organs. When the tissue is examined under a microscope, the protozoa, which are two to three microns in diameter, are seen inside the cells.

Spread of the Disease:

All species of Leishmania are transmitted through the bite of sand flies of the genus Phlebotomus. These bloodsucking flies can obtain the protozoa from infected people and transmit them to healthy ones. Dogs can also harbor the organisms, and both L. brasiliensis and L. tropica also infect rodents. These animals thus form a reservoir from which the diseases can be transmitted to man.