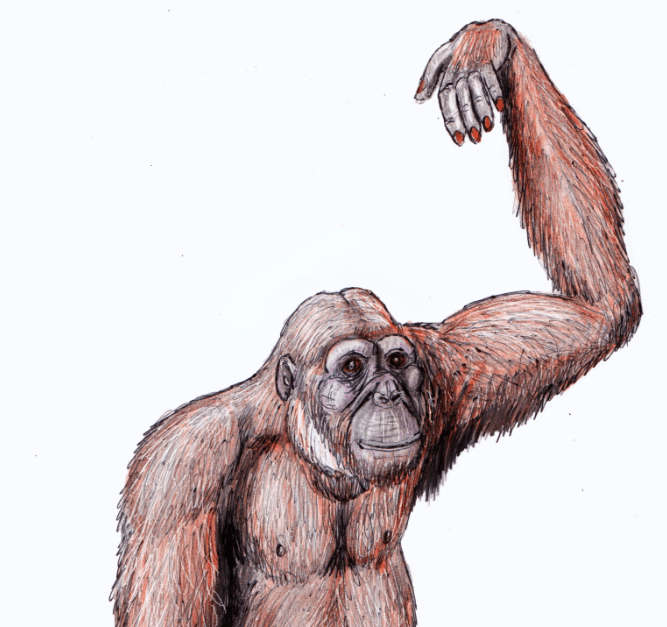 Dryopithecus; is a genus of fossil apes. Dryopithecus apes ranged over Europe, Asia, and Africa during the early or middle Miocene to the Pliocene, that is, from 5 to 20 million years ago. They were the ancestors of chimpanzees and gorillas. Dryopithecus gives a clear idea of the ape grade of organization that probably preceded the hominid level of organization.

Seven species (including findings known as Proconsid, Sivapithecus, ana Kenyapithecus) are classified in the genus Dryopithecus. Some were slightly smaller than pygmy chimpanzees, while others were the size of gorillas. The only known skull is lightly built with a more or less globular braincase. The forehead and jaws do not protrude much, and there are no brow ridges. Although the cranial capacity of Dryopithecus apes cannot be accurately determined, it was probably about 100 to 400 cc, a volume similar to that of living apes of equivalent bulk. The braincast indicates that Dryopithecus was more monkeylike than apelike, however. The unspecialized post-cranial skeleton shows no walking or arm-over-arm swinging specializations.

The teeth of Dryopithecus differ from those of living apes in several ways. In Dryopithecus the lower incisors are relatively smaller than in living apes and closer to one another, whereas the canines may be the same size or smaller than those of living apes. The molars are generally lower-crowned than in chimpanzees or gorillas, and they increase in size from the first to the third, also unlike modern apes. As in living apes, however, the most anterior lower premolar has a shearing edge.