Information about dominoes. What is Dominoes. Domino games rules and how to play domino

DOMINOES, is any of several number-matching games for two or more persons. The games are played with flat, oblong blocks identified by the number of dots on the faces. Domino blocks in various forms appeared a thousand years ago in China, but these pieces were generally substitutes for dice. The modern game appeared about 1750 in Italy and France and gradually spread throughout Europe and to the United States. Of the many different games, draw, muggins, sniff, and matador are probably the most widely played.

The blocks used in dominoes, commonly called bones, are made of wood, bone, or similar materials. They are rectangular, with one face black and the other divided into halves, or ends, by a ridge across the center. The ends may be blank or marked by dots. In a standard set of 28 bones, the ends show every possible combination of two numbers from zero to 6. Bones with the same number of dots at each end are doublets, and each doublet belongs to one suit. (A suit consists of pieces with the same number of spots on an end.) Other bones belong to two suits, for example, 0-4 or 3-6. A 28-piece set has seven suits but eight ends of any one number. 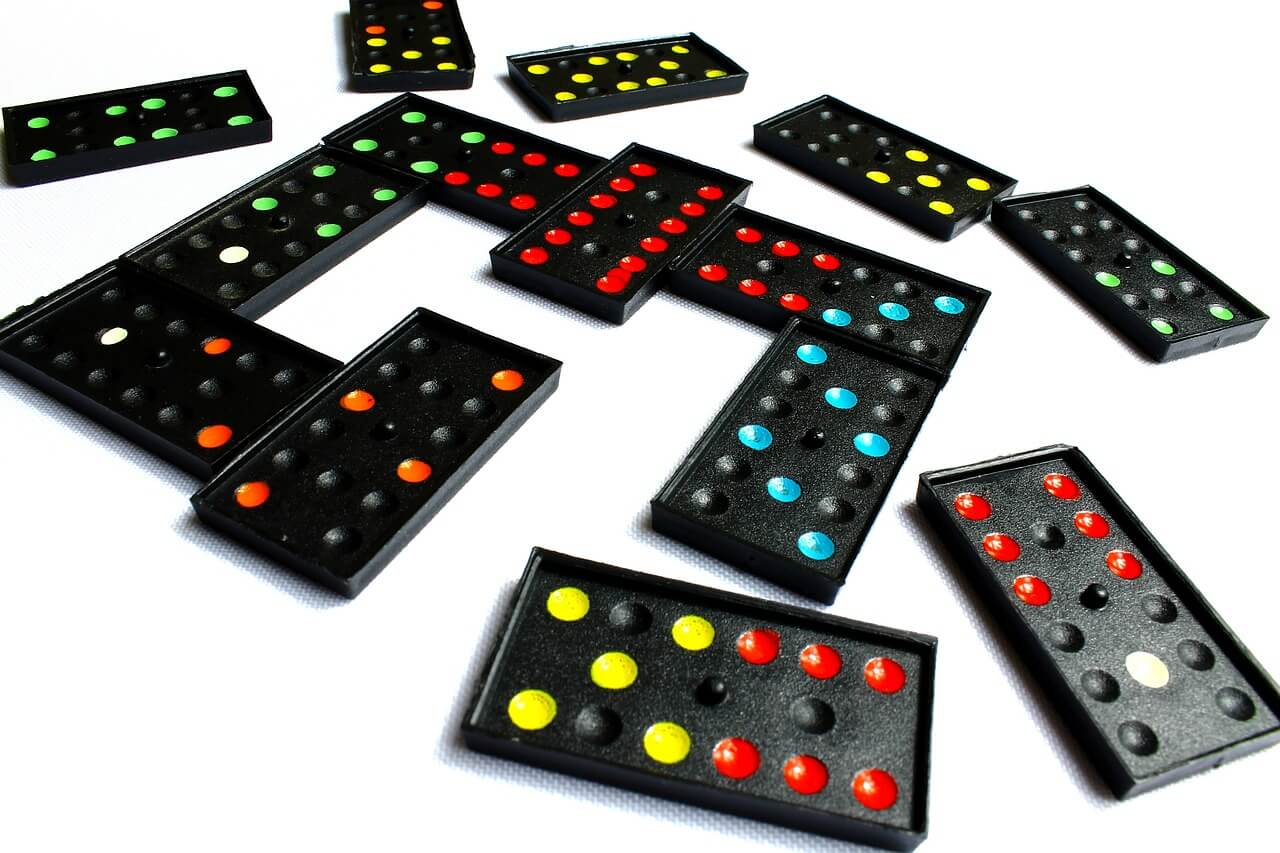 The draw game is the basic version for two. Players shuffle the bones face down; then each takes seven from the pile, the remaining pieces forming the stock or boneyard. The leader, determined by a draw, places the first bone, known as the set, on the table. After that, turns alternate. A play is made by placing a bone adjacent to another with a free end, so that touching ends match (see illustration). Doublets are placed crosswise in the chain or layout, so that there are always two free ends. Only one end can be matched in a turn, and if a player is unable to make a match he must draw from the boneyard until he can. He must play if he is able. If he exhausts the boneyard and still cannot play, his turn lapses, but he may reenter the game if his adversary plays a bone he can match. The first to dispose of all of his pieces calls “Domino!” and scores the total count of his opponent’s unplayed bones. If neither side can play, the game is blocked, and the player with the lowest count scores the total dots in his adversary’s hand. If three or four play, each starts with five bones. Game is 50 to 100 points.

This is an elaboration of the draw game. In addition to the points scored by going domino, a player who makes the open ends of the layout total 5 or a multiple of 5 immediately tallies that number of points. Also, he does not have to play, if he prefers instead to draw. Game is 200 points. 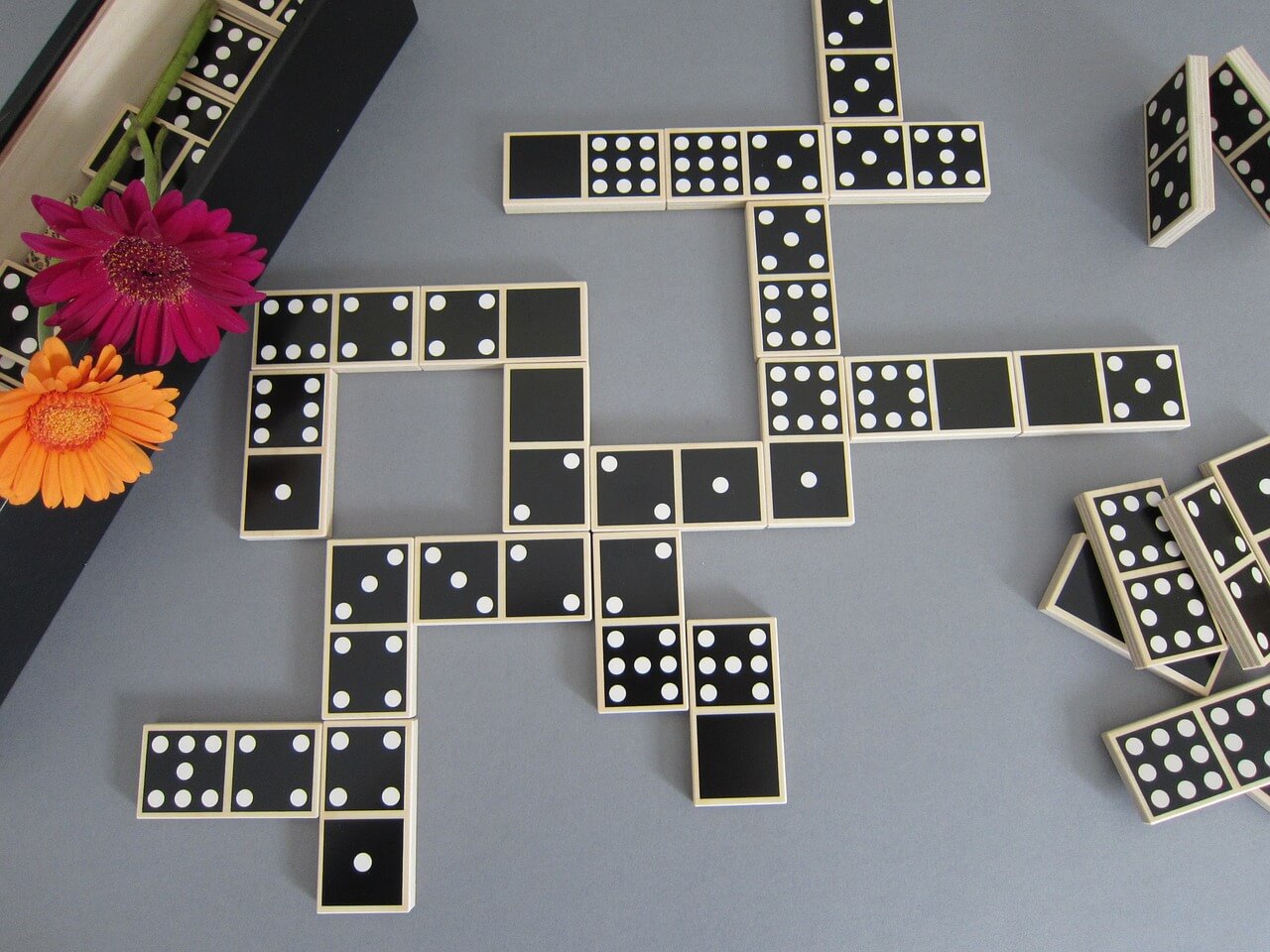 This varjant of muggins makes the first doublet played, called sniff, matchable on four open areas (ends and sides), because it can be placed lengthwise or crosswise in the layout. Other doublets must be used crosswise. Game is 200 points.

In this variant of draw, the object is not to match touching dominoes but to total 7; for example, 2 would be played to a 5, or 3 to a 4. A blank is a block, except to any one of four matadors: 0-0, 6-1, 5-2, and 4-3. Either end of these bones may be played at any time. If a player cannot make a 7, he must draw from the boneyard until he can, but two bones must always be left in the boneyard. (It is often good strategy for a player to draw rather than to use his last matador.) Doublets count as single numbers only, that is, 2-2 can be played with a 5 and not with a 3; and therefore doublets are nlaced endwise in the layout. In scoring, the full number of doublet spots is counted. If the game is blocked, the player with the lowest count scores the number of the combined hands. With two or three players, seven dominoes are drawn to start; with four players, five dominoes make up the hand. The highest double or the one with the highest domino places the set. Game is 100 noints. 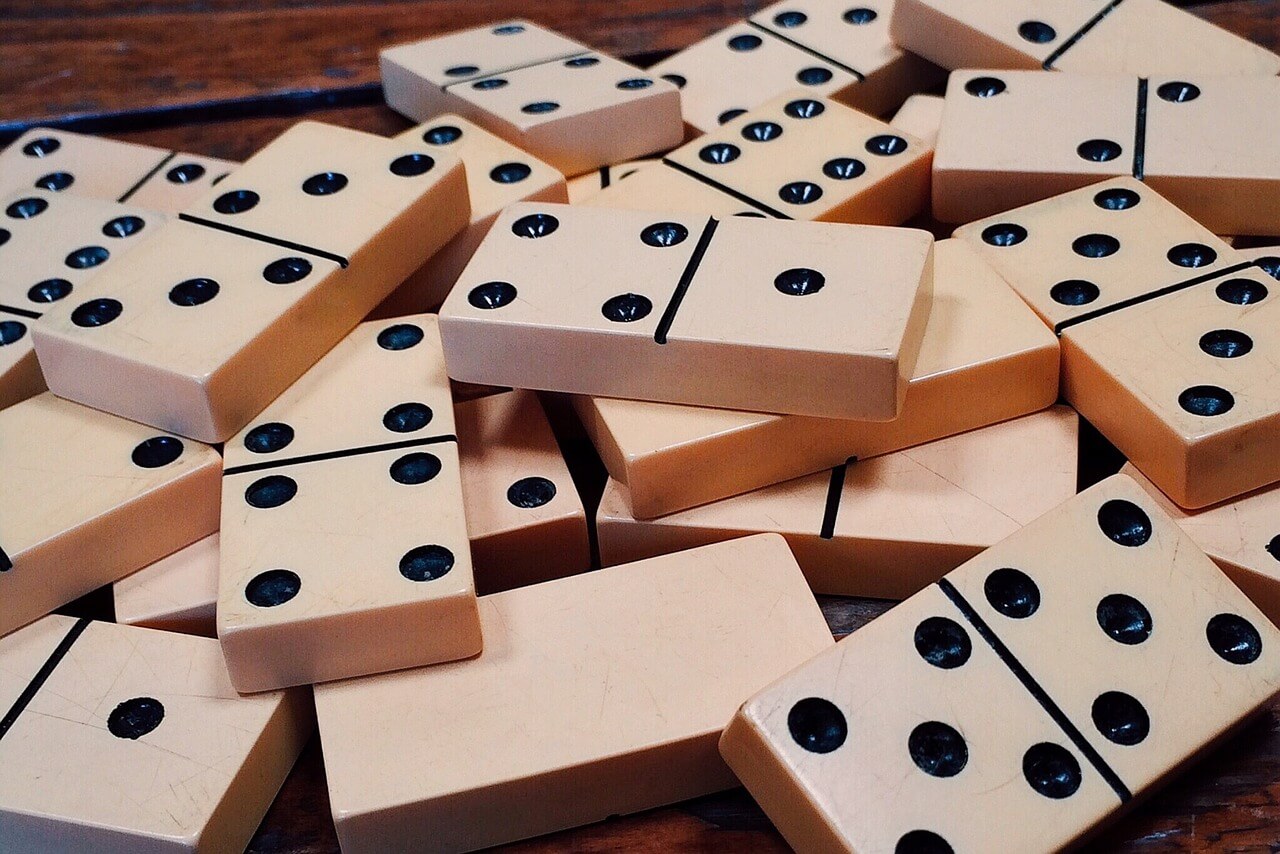 Many variations in rules exist in dominoes. Some sets use bones up to 9-9 and others as high as 12-12. In draw, sometimes the player with the highest doublet starts the game; in some versions he is not required to make a play. In some games the last two bones may never be drawn from the boneyard. In scoring any variant, sometimes only the difference between the players’ totals are counted when neither goes domino.