When and what is Cenozoic Era? What are the features and facts about geology, fauna and flora of Cenozoic Era.

CENOZOIC ERA is the last great division of geologic time. It began about 70 million years ago and extends to the present. The name Cenozoic —from Greek kainos, “recent,” and zoe, “life” —was coined in 1840 by the English geologist John Phillips (who spelled it Kainozoic). The era is divided into the Tertiary and Quaternary periods. The Tertiary is further divided into the Paleocene, Eocene, Oligocene, Miocene, and Pliocene epochs, in order of increasing recency. The Quaternary consists of the Pleistocene epoch and recent times (the past 10,000 years). The spans of the epochs in the Tertiary period have been estimated as 10, 20, 15, 13, and 10 million years, respectively; of the Pleistocene, 2 million years. These estimates are based on the ratios of isotopes produced by radioactive decay in the rocks of the successive epochs. 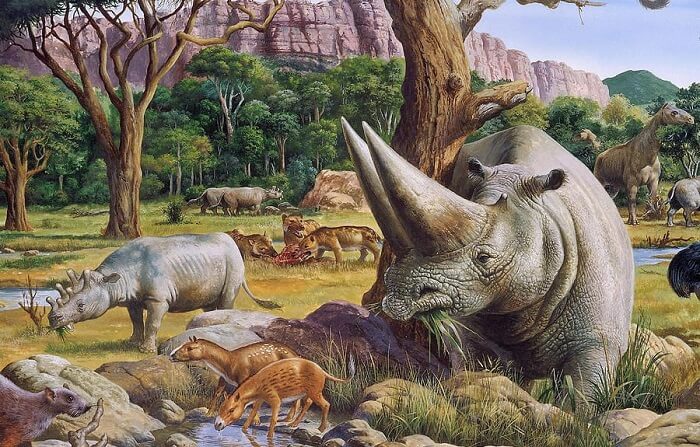 Geology of the Era

The Cenozoic rocks of North America are found in several contrasting regions. The coast of the Gulf of Mexico is underlain by sands and clays that dip seaward, increasing in thickness to a maximum of 6 or 7 miles (about 10 km) in a trough beneath the shore of the western Gulf Coast. Salt domes penetrate the beds, rising from pre-Cenozoic layers in the deep subsurface; oil is derived in Mississippi, Louisiana, and Texas from the flanks of these domes. The Florida peninsula is underlain by Cenozoic limestones that were deposited in shallow seas on a gradually subsiding surface. The Atlantic coast has a layer of seaward-dipping Cenozoic sedimentary rocks, a few thousand feet thick, and extending northeastward to the Grand Banks of Newfoundland.

The distribution and character of Cenozoic rocks along the Pacific coast of North America are much more varied, because there was active deformation and volcanism in that belt through-out the era. In the eastern part of the belt, marine sediments pass into nonmarine rocks and into lavas such as those that form broad plateaus along the Columbia River. In the western interior States, deposits laid by streams and lakes accumulated in basins that were bounded by rising fault blocks to the west. In Utah, Wyoming, and Colorado, freshwater lakes were filled with sediments. Some of the shales there are so rich in organic matter that they are a great potential source of oil. Volcanism also produced local lava flows and fragmental deposits. Stream-laid sediments spread eastward from the Rocky Mountains.

Studies of lavas of the Pliocene and Pleistocene have revealed that reversals of the earth’s magnetic field have taken place. Moreover, the reversals recorded in the rocks on the margins of oceanic rifts show that the ocean floors have been spreading, at rates of up to 2 inches (5 cm) a year, over the past several million years.

Fauna and Flora of the Era

Life in the earliest Cenozoic differed from that of late Mesozoic times in various degrees. There were the minor modifications from ancestor to descendant that are invariably present in geologic succession; but the abrupt changes, in which characteristic life forms vanish completely without leaving lineal descendants, are much more definitive. The ammonoid cephalopods are an example. Some of these animals may have survived the Mesozoic (and some Paleocene rocks may mistakenly be called Cretaceous because of the presence of their fossils), but they never attained the abundance in the Cenozoic that they had in earlier times. The dinosaurs—the great reptiles of the Mesozoic—have never been found in Paleocene rocks in North America, and only doubtfully in Europe.

The ordinary life forms of the Cenozoic soon became quite unlike those of the preceding era. In the seas, the differences at first were negative ones, such as the absence of ammonites. Orbitoid foraminifera—disc-shaped one-celled animals like the nummulites that fill the lunestone of the pyramids—grew in the warmer seas. (A few had also lived during the Cretaceous, however.) On land, the forests of the Paleocene contained many of the deciduous trees that dominate present forests of similar climates—poplars, oaks, maples, birches, and their associates. The sequoia, a conifer whose present range is very limited, was spread over larger regions in the Paleocene. Grasses and herbaceous plants that still abound grew on the plains. 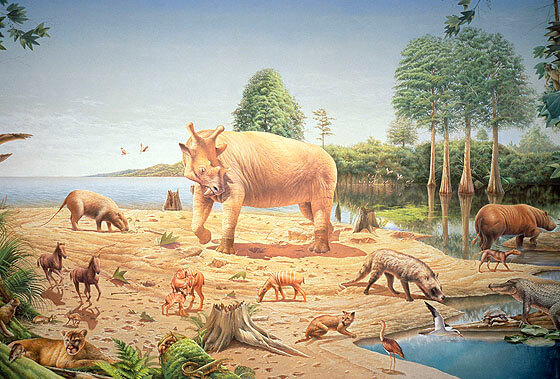 It was in the vertebrate inhabitants of the forests and plains that the Cenozoic introduced the greatest changes. Mammals had existed during the Mesozoic as little animals, obscure in number and size as compared to the great dinosaurs and other reptiles. With the coming of Cenozoic times, however, most forms of reptiles became extinct; only a few survived, such as turtles, snakes, and crocodiles. In contrast, many different varieties of mammals soon developed. Some of them became immense and grotesque and eventually died out. Thus, amblypods —huge, clumsy, hoofed beasts somewhat resembling the hippopotamus but only distantly related —did not survive the Eocene. Titanotheres— elephantlike creatures with long nasal projections resembling tusks— roamed the plains during the Oligocene; their fossils are preserved in the clays of the South Dakota Badlands.

The mammals ancestral to the modem ele-phant were small and undistinguished in Miocene times; as the size of their descendants increased, their tusks and trunks grew longer. The descendants of a little, doghke Eocene mammal became larger, acquired a longer head and legs and high-crowned teeth, and developed a one-toed hoof, until at last the modern horse appeared. Tire record of man’s ancestors is not as well established, but they may have been tree-dwellers. The remains of manape forms that date from Miocene times have been found in scattered regions, but the first traces of modem man occur in the Pliocene or early Pleistocene— a small fraction of the time since the beginning of the Cenozoic era.