What is carbon cycle? Defination and diagram of carbon cycle. Information about the cycles of matters. 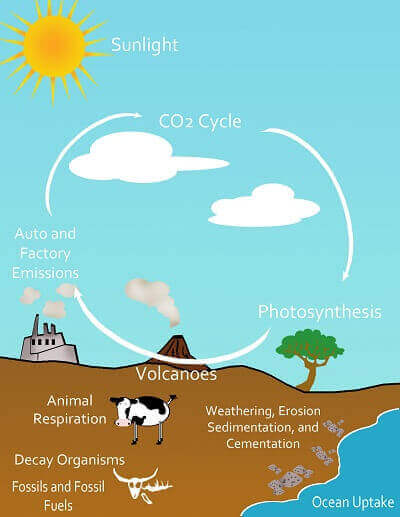 . These events take place over and over again.

Photosynthesis and respiration play an important role in the carbon cycle. But what happens if the amount of carbondioxide increases in the atmosphere? if there is too much

in the atmesphere then the balance of nature changes. Light can pass through carbondioxide easily, but heat from the earth cannot go back into outer space. More

makes a blanket around the earth. The earth will be come warmer.

to the atmosphere. We release about five thousand millian tones of

into the air every year and they fear that the additional

will warm the earth enough to melt polar ice. it will bring floods to law countries. To keep oxygen-carbondioxide balance in nature, green part of the country must be increased. For this reason green plants and forests mu st be protected from destruction. If trees are cut for wood products they should be replaced by replanting. By this way green plants make photosynthesis. They take in

We also must reduce the using of fossils fuels to decrease amount of carbondioxide in the atmosphere.