Carbohydrates; any of a large class of carbon-hydrogen-oxygen compounds that includes the simple sugars and their polymers (chiefly starch, glycogen, and cellulose). Most carbohydrates are produced by photosynthesis in plants. They are die major food compounds for both plants and animals, and one group of carbohydrates (cellulose) is the chief structural material of plants.

Carbohydrates are divided into four groups, according to the number of simple sugars or their derivatives contained within the carbohydrate molecule. Nearly all are white solids that are soluble in water, and those of low molecular weight are sweet.

The monosaccharides are simple sugar molecules made up of three, four, five, or six carbons in chain or ring form. The three-carbon sugars, called trioses, include glycer-aldehyde, an aldo-sugar, and dihydroxyacetone, a keto-sugar. Tetroses, or four-carbon sugars, include D-erythrose and D-threose.

The five-carbon sugars are called pentoses. Some, such as D-ribose and D-xylose, occur widely in nature and are of great biological significance. L-arabinose is a five-carbon compound that is the only L-series sugar to occur in appreciable quantities in nature. In some of the five-carbon sugars, a hydrogen atom replaces the hy-droxyl group. The resulting compound has one less oxygen atom knd is called a deoxy compound. One deoxy compound, 2-deoxy D-ribose, is a major component of biological coding systems.

Six-carbon sugars, the hexoses, are the most important intermediate source of energy to biological organisms (sunlight is the primary source; adenosine triphosphate, or ATP, is the immediate source). Common natural hexoses include D-glucose, D-mannose, D-galactose, and D-fructose.

D-fructose, a common fruit sugar which also is found in honey, is the only sugar besides glucose that is metabolized in any substantial quantity by plants and animals for energy. In the respiratory process in cells, glucose is converted into fructose-1,6-diphosphate—an important step in glucose metabolism for the liberation of energy.

Glucose, fructose, and mannose can be fermented to yield carbon dioxide and alcohol. Some organisms, like lactic-acid bacteria, cannot live in an atmosphere with free oxygen and must rely on fermentation for their energy.

Another important group of monosaccharides, the hexosamines, have an amino group (NH2) in place of the hydroxyl group on the second carbon atom. These compounds are the monosaccharide subunits in chitin—the exoskeletal material in insects, lobsters, and crabs, and they are found in heparin, a substance in the blood that prevents clotting. The hexosamines also form a large part of hyaluronic acid, a carbohydrate that has adhesive properties in tissue and lubricating properties in the joints. They are the major substance, other than water, in the vitreous humor of the eye and in the umbilical fluid. These substances —chitin, heparin, and hyaluronic acid—also are known as mucopolysaccharides.

The disaccharides are molecules of two simple sugars linked together. Common disaccharides are maltose, lactose, and sucrose. Maltose (malt sugar) is made up of two glucose units; lactose (milk sugar) consists of one glucose unit linked to one galactose unit; and sucrose (cane sugar) is composed of glucose and fructose. One interesting disaccharide is amygda-lin, a component of oil of bitter almonds. When hydrolyzed, it yields two glucose molecules and the poisonous hydrogen cyanide.

The trisac-charides are raffinose (fructose, glucose, and galactose) and melezitose (glucose, glucose, and fructose). The most commonly known polysaccharides are cellulose, starch, and glycogen. All of these are made of identical sugar molecules linked together in a long chain.

Cellulose is the most abundant polysaccharide and makes up over half of the total carbon in the plant world. It is found in all plant cell walls and in the woody parts of shrubs and trees. Cellulose also makes up the body wall of tunicates in the animal kingdom. The cellulose molecule is a long unbranched chain consisting of 300 to 3,000 glucose units joined together. The molecular weight of cellulose ranges from 50,000 to 500,000. Cellulose is almost totally insoluble in water and thus is difficult to digest. Herbivorous vertebrate animals such as sheep and cattle and invertebrates such as termites digest cellulose by way of enzymes produced by microorganisms living in their intestinal tracts. Man has difficulty in digesting cellulose, so it serves mainly as roughage in his diet.

Starch is a large polysaccharide made up of approximately 500 to 10,000 glucose subunits organized as repeating maltose (glucose-glucose) units. It is the energy storage form in cereal grain, peas, beans, potatoes, green fruits, and other plants. Natural starches contain two components—amylose, which has long unbranched chains, and amylopectin, a shorter, highly branched chain.

Glycogen, or animal starch, is a reserve energy form stored in liver and muscle cells. It is a branched-chain polysaccharide readily dispersed in water. The size of the glycogen molecule ranges from approximately 1,000 to 400,000 glucose units with a total molecular weight of 160,000 to 65,000,000. 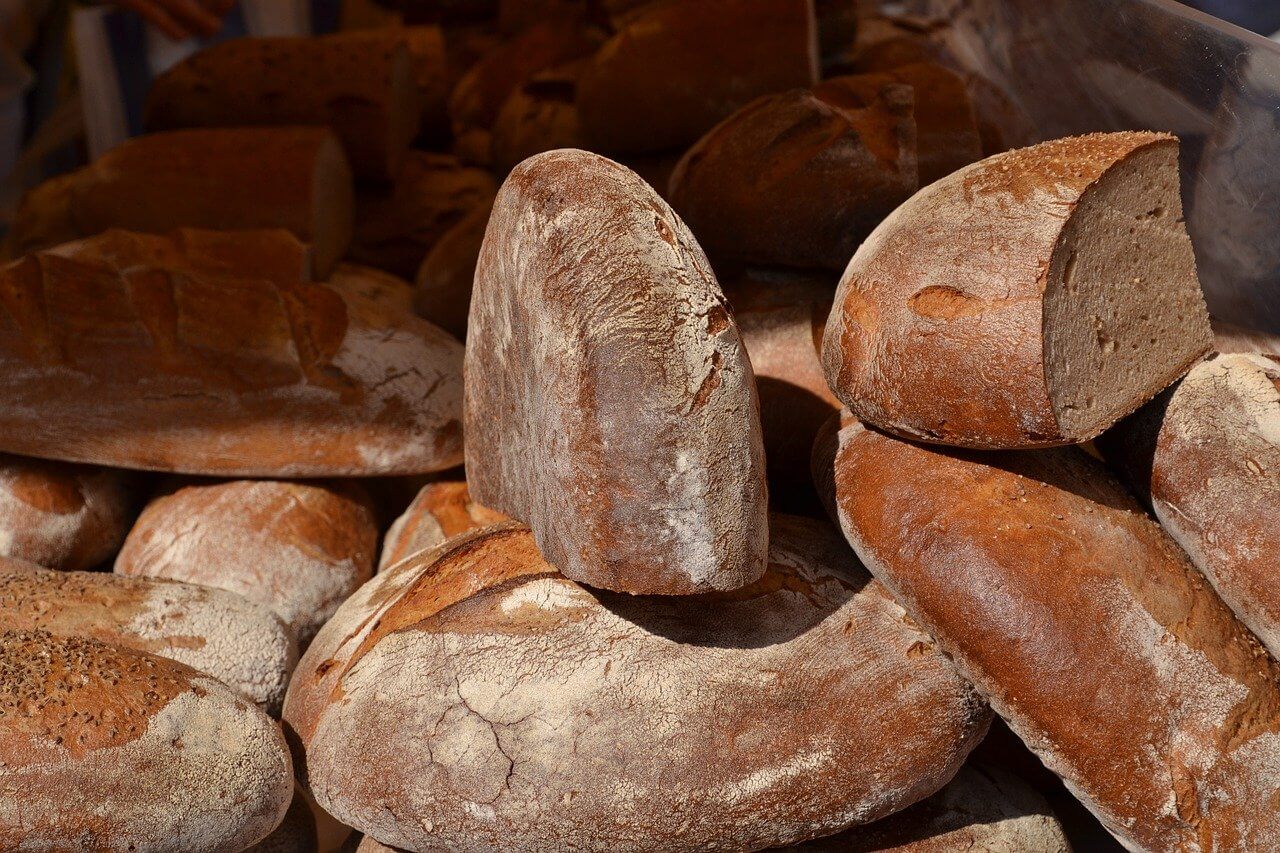 Carbohydrates can be represented by different types of chemical notation. Each of the notations emphasizes certain properties and characteristics of carbohydrates.

Carbohydrate molecules can be represented as straight carbon chains or in some cases branched carbon chains. This method of representation emphasizes the asymmetric carbon atoms in carbohydrates and the resulting stereoisomers (the different possible arrangements in space of the atoms that make up a particular molecule).

One example of a carbohydrate with different stereochemical forms is glucose. Of its six carbon atoms, four (numbers 2, 3, 4, and 5) are asymmetric, and thus glucose has 16 possible isomers. The carbon atoms containing hydroxyl (OH) and hydrogen (H) groups can have the groups reversed. This switch changes the molecular form and thus results in a different six-carbon sugar. Glucose also exists in two different forms (a and P) when the compound occurs in ring form. The first carbon becomes asymmetric, and the H and OH positions on this atom may be reversed.

Glucose also can be a dextro-isomer or a levo-isomer, in which a solution of a glucose rotates a plane of polarized light either to the right or to the left. The plane of rotation and the angle of rotation are measured by an instrument known as a polarimeter. Solutions with this property are called optically active solutions. Compounds shifting the plane of the light to the right are dextrorotatory compounds and are designated with either a d or a plus. Those shifting the plane of light to the left are levorotatory compounds are are designated with either an l or a minus, as in ( — ) fructose.

Carbon atoms are bonded to hydrogen and hydroxyl groups at certain angles. When a three-dimensional model of glucose is built using known angles, the oxygen on carbon 1 is seen to be close to the hydroxyl group on carbon 5. In an actual molecule of glucose, the oxygen would therefore attract the hydrogen atom in the hydroxyl group, and the oxygen can thus connect carbon 1 and carbon 5, producing a ring form. This is the second way in which carbohydrates may be represented. The ring structure is more accurate than the straight-chain in summarizing the properties of sugars. Also, X-ray crystallo-graphic studies have shown that glucose, for instance, is a cyclic compound.