What is Auto-da-fé? Definition and the history of Auto-da-fé, information on Auto-da-fé.

Auto-da-fé; was the name of the ceremony at which judgment was pronounced on those convicted of heresy by the Spanish Inquisition. It was essentially a religious ceremony, taking its name from a Portuguese phrase meaning “act of faith.” 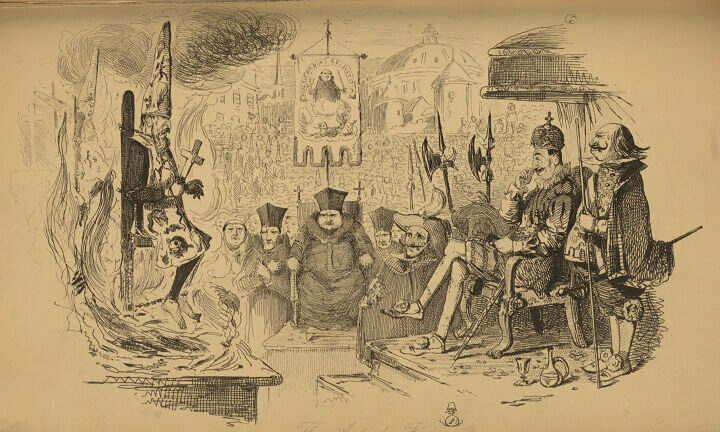 Persons convicted by the ecclesiastical courts 6f the Inquisition were expected to recant their heresy at this time, thus performing the act of faith, and the public was encouraged to witness this act. Those who refused to recant or who protested their innocence were turned over to the civil authorities. The civil authorities executed the sentence, which often was death by burning at the stake. Ultimately, the term “auto-da-fe” also came to mean this death by fire.

The ceremony, known originally as the semo generalis (general sermon) from the opening address of the inquisitor, was a long-established procedure of the Inquisition, which began as an institution in 1232. It was from the Spanish Inquisition, however, dating from 1479, that autos-da-fe received historical notoriety. The ceremony was preceded by a procession and a Mass. The condemned wore the sanhenito, a yellow penitential garment embroidered in front and back with a cross and symbols of the crimes of which he was convicted. After the opening statement, during which the invitation to recant was issued, civil authorities were sworn in to carry out the sentence. Decrees of mercy, ranging from a reduction of sentence to freedom, were announced for some of those already under sentence for heresy. Finally, new sentences were pronounced, and those condemned to death were taken to the place of execution.

Autos-da-fe continued until 1808, when the Spanish Inquisition was halted by Joseph Bonaparte, king of Spain. They were reintroduced by Ferdinand VII of Spain in 1814 but were finally abolished about 1820. It has been estimated that about 2.000 autos-da-fe took place in Spain, Portugal, and their dependencies between 1480 and 1825, and about 30,000 persons were put to death.