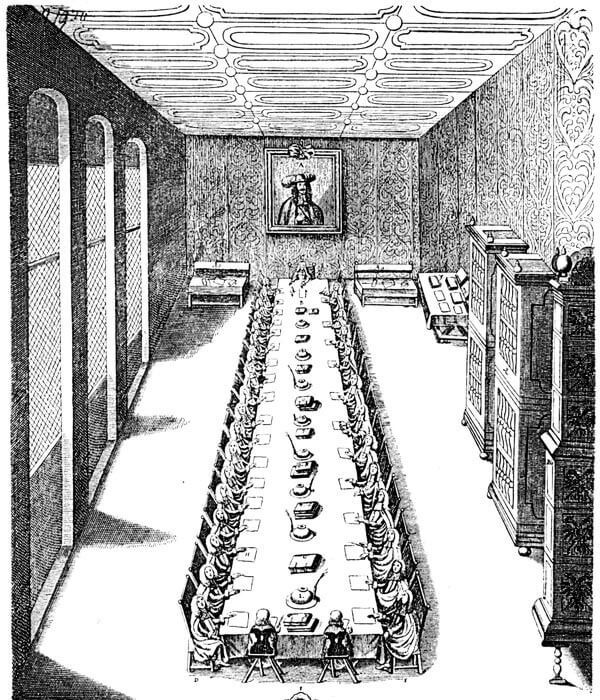 Aulic Council; one of the two highest courts of the Holy Roman Empire. Known in German as the Reichshofrat, it developed from an advisory group around the emperor. Emperor Maximilian I set it up in 1498 as a rival to the Imperial Chamber, or Reichskammergericht, which had been forced upon him by the Diet. The name “Aulic Council” stems from the Greek word aulikos, which means “hall” or “court.”

Its powers were curtailed by the Peace of Westphalia in 1648, but six years later it was formally constituted as one of the two supreme courts of the empire, the equal of the Imperial Chamber, and the highest court of appeals in the empire. In this form it consisted of a president, a vice president, the vice chancellor of the empire, and 18 councillors, all selected and paid by the emperor. Its seat was at the imperial residence, Vienna. Its jurisdiction included the reserved rights of the emperor, appeals on the part of the states from decisions in minor courts, and whatever concerned the empire in Italy.

The council was dissolved on the death of the emperor and had to be reinstituted by his successor. Six of the councillors were Protestants, whose unanimous vote could not be set aside by the majority. Although the council retained its judicial powers, it gradually lost its executive strength. On the fall of the empire in 1806 the council ceased to exist, but the title was used by the council of state of the Austrian empire.