What does the doctrine of Arianism (Aryanism) established by Arius mean? Information about the content of this teaching, its beliefs, from two different sources.

Arianism; is the common designation for the teachings of Arius (about 265-356) and his followers, which deny the divinity of Christ. It had its roots in Greek theological speculation beginning with Gnosticism and may be regarded as an elaborate attempt to define the relation of Christ to God according to natural reason (see Christology). Centered in Alexandria and Antioch, it was one of the most formidable challenges to orthodoxy in the history of the Christian church. During the greater part of the 4th century, its most flourishing period, it enjoyed the strong support of the Roman emperors and had a special appeal for the intelligentsia. 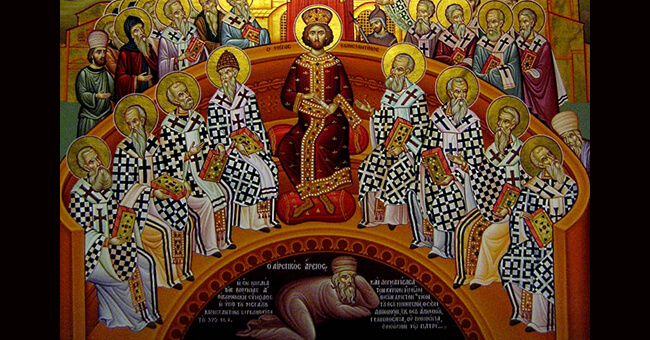 The basic doctrine of Arius may be summarized as follows: (1) God is unique and unbegotten (agennetos), and everything outside of God was created from nothing by the will of God. (2) The Logos (Word)—Christ—is an intermediary between God and the world. He was before time, but not eternal. There was a time when the Word, did not exist. (3) The Word therefore was created. He was made (genetos). If it is said that He was born, begotten (gennetos), this is to be understood in terms of an adoptive sonship. (4) The incarnate Word (Christ), consequently, is inferior to God but is to be worshiped, since He is exalted above all other creatures and is both Ruler and Redeemer.

Arianism from the first was a fully developed doctrine. Hence, its history is the story of attenuations in the direction of orthodoxy and return to the original tenets of the church.

The Council of Nicaea (325) condemned the teaching of Arius and declared that the Son was of the same substance (homoousios, consubstantial) with the Father. However, Eusebius of Nicomedia, although he signed the formula of Nicaea, soon repudiated it. Through influence at the imperial court, he secured the recall of Arius from exile and the deposition of Athanasius of Alexandria, the leading champion of the Ni-cene definition. Eusebius represented a rigid form of Arianism. By the middle of the 4th century there were three main groups of Arians, all seeking and in part obtaining imperial support under Constantius II. The first group consisted of uncompromising Arians who maintained that the Son was unlike the Father (anomoios) and are called Anomoeans. The second group proclaimed in a Synod of Ancyra (358) that the Son is like in substance with the Father (ho-moiousios) and are called Homoeousians or Semi-Arians. The third group rejected the terms homoousios, homoiousios, and ousia, and maintained simply that the Son was like the Father. The position of the third group was not very different from that of the second.

The Homoeousians or Semi-Arians tended toward orthodoxy and were well received by Athanasius at the Council of Alexandria in 362. The Cappadocian Fathers, furthermore, showed that the doctrinal problem involved could be solved by recognizing one nature and three persons (hypostases). Despite the fanatical opposition of the Arian emperor Valens, Nicaean orthodoxy triumphed in the West and moved toward final victory in the East. The whole East subscribed to doctrines pronounced at Rome in 378 and 379, and the emperor Theodosius was an ardent champion of the Nicaean Faith.

The Synod of Constantinople (381), later recognized as the Second Ecumenical Council, reaffirmed the Nicene Creed with slight changes, thus completing the victory of Nicaea in favor of the full divinity of the Son. Arianism was soon suppressed within the empire, but it prevailed for a long time among the barbarians. The conversion of Clovis, king of the Franks, to the orthodox faith in 496 was followed by a decline of Arianism among the Teutonic peoples.