What is abscess? What are the causes, symptoms and types of abscess? Information on abscess treatment. 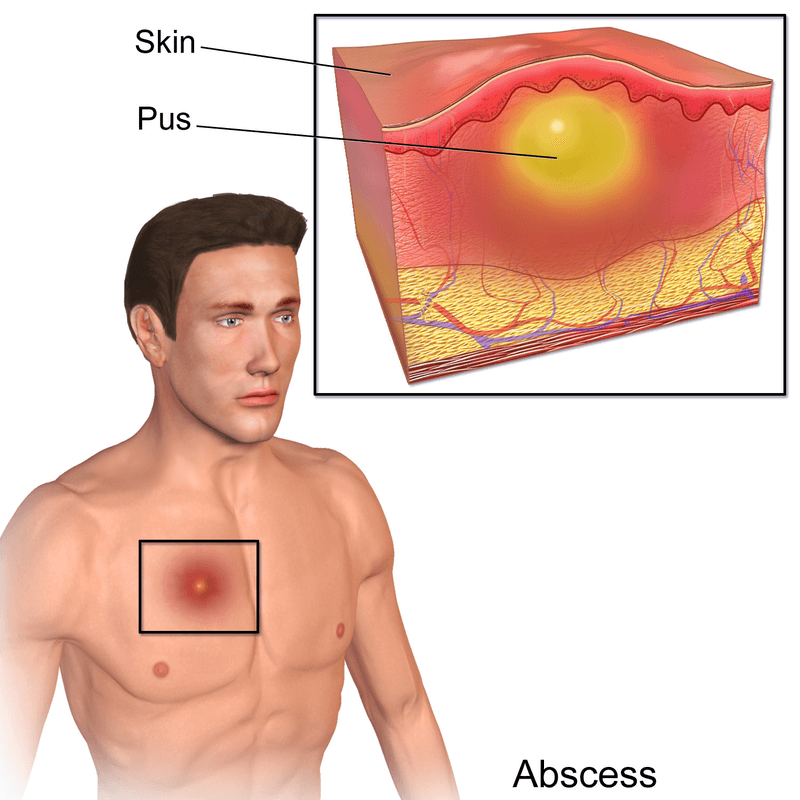 Abscess; a localized collection of pus caused by bacteria, fungi, or parasites that have gained access to solid tissue.

Most abscesses are caused by pusforming (pyogenic) bacteria. These bacteria include staphylococci, streptococci, gonococci, and meningococci. They liberate toxins that destroy cells, increase the local acidity, and cause the capillaries to dilate. White blood cells (leukocytes) then can pass through the dilated capillary walls. These white cells liquefy dead tissue, resulting in a cavity containing pus. Pus consists of living and dead bacteria, fragments of destroyed tissue, some white cells, and fluid given off fromcells. When an abscess occurs, monocytes (certain white cells) are mobilized to eliminate the dead cells and bacteria by a process known as phagocytosis. Other cells combine with newly formed capillaries and other elements to form a wall to delimit the abscess. The size of the abscess is determined by the number and virulence of the bacteria and also by the resistance of the host.

Symptoms. The chief signs of an abscess are swelling, pain, heat, and redness. Swelling is the result of the accumulation of fluid, serum, and other substances given off by the cells. Pain is attributed to increased tension that exerts pressure on local sensory nerve endings. Heat and redness are due to the engorgement of blood vessels. When the pain is severe, a fifth sign may appear: interference with the normal functioning of the organ or organism. Fever and a general feeling of malaise may also occur. Other complaints vary with the location of the abscess.

Various names are applied to abscesses according to the causal agent and the location of the abscess.

Brain abscesses may result from different types of bacteria carried from an original site of infection in the ear, nasal passages, lung, or heart. The majority of brain abscesses come from middle ear infections and occur in the area of the cerebellum. However, an abscess may develop in any part of the brain.

An abscess around the tonsil (peritonsillar abscess) sometimes develops as a complication of streptococcal tonsillitis. Also known as quinsy sore throat, it may produce pus that spreads to form another abscess behind the pharynx (retropharyngeal abscess).

A lung abscess is usually caused by the aspiration of infected material. This may follow surgery in which a general anesthesia has been used, or it may result from an infected blood clot or from some types of bacterial pneumonia. When the abscess erodes a major part of the bronchial tube, the patient coughs up large amounts of pus. If the abscess remains untreated, pus may develop in the cavity around the lungs (pleural cavity), causing empyema.

Abscesses of the kidney are usually the result of infections spreading up from the bladder; they may also result from bacteria carried in the blood from a carbuncle or from an inflammation of the lining of the heart (endocarditis).

Abscesses of the fiver may be caused by bacteria in the veins, arteries, and ducts entering the liver. The portal vein, which drains the intestinal tract and goes to the liver, is responsible for most abscesses of the fiver. An example is the amoebic abscess, a common complication of amoebic dysentery.

Ovarian abscesses often are associated with an infection of the fallopian tube on the same side. In such a case, the term “tubo-ovarian abscess” is employed.

The general treatment for an abscess is the surgical evacuation and drainage of the abscess and the administration of antimicrobial drugs to combat infection. Small abscesses may undergo complete resolution without drainage, while larger abscesses may continue to accumulate pus until the abscess breaks.

When uncontrolled, bacteria from abscesses may get into the blood stream and cause abscesses to appear in distant organs.