What Is A Micrometer? What is the use of micrometer, information on micrometer.

Micrometer; an instrument using a highly accurate screw for determining minute measurements. This screw has a fine, uniform pitch, measuring 0.025 inch in American machinists’ micrometer calipers and 1 millimeter in instruments employing the metric scale. It is turned by a head marked in equal divisions. A reading of scales on the head and shaft gives the distance through which the screw has traveled. The micrometer was invented about 1638 by William Gascoigne, an English astronomer, as an improvement on the vernier for use in measuring the diameter of the sun, moon, and planets. The principle is now an essential adjunct of instruments used by astronomers, engineers, and machinists.

The filar micrometer is an attachment placed at the eye end of a telescope to aid in measuring distances between stars, the direction of one star from another, the diameters of planets, the positions of comets and asteroids, and other astronomical phenomena. In addition to the screw mechanism, it contains one or more fixed fine wires or threads and one or more that are movable, so that the two sets can be aligned with the objects viewed and give the observer the required measurements. It has come to be employed more frequently in studying distances on astrographic plates than in making measurements by eye. This device is essentially a comparator whose carriage moves on a micrometer screw. It is used also for measuring distances through a microscope and between the lines taken by a spectrograph. 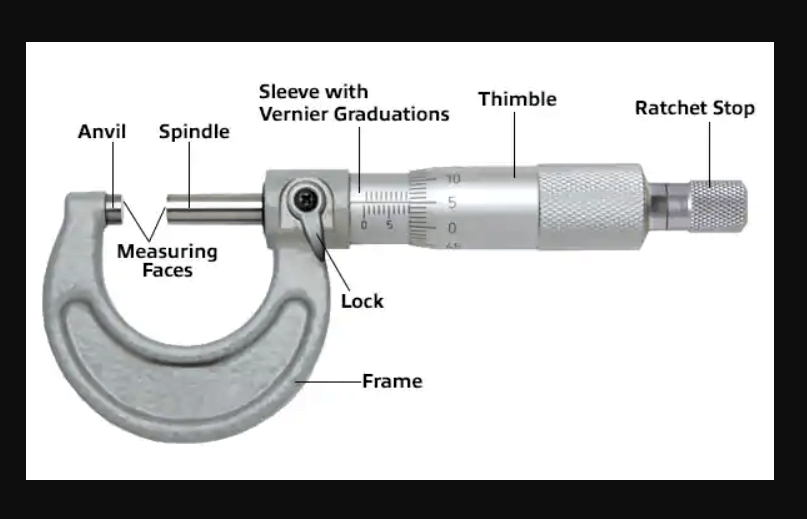 The micrometer is also employed by physicists, as in a comparator for measuring polarized light and in the adjustment of the movable mirror in an interferometer for separating a beam of light into two or more parts. It is an essential mechanism in the adjustable leg of a spherometer for measuring either convex or concave curvatures, and is particularly useful in the grinding of lenses. Civil engineers use an attachment at the eyepiece of transits similar to that on telescopes and microscopes.

Perhaps the most familiar micrometer is the machinist’s micrometer caliper. This is an extremely accurate measuring device, capable of readings to within 0.0001 inch. It consists of a slide caliper, resembling an ordinary screw clamp in shape and having a fixed contact or anvil and a movable contact or spindle. These contacts are adjusted by a precision screw provided with graduations that can be read in hundredths of a millimeter or in thousandths of an inch. When the contacts are closed, the scales read zero; when they are open and closed again on a thin plate or wire, the reading gives the thickness. Most micrometer calipers in use in the United States have screws with 40 threads per inch ; thus each turn of the screw represents a distance of 0.02S inch. The head or thimble is graduated from 0 to 25, and the sleeve through which the spindle moves is graduated with marks 0.025 inch apart, every fourth mark representing one tenth of an inch. Many of these micrometers are equipped with a ratchet stop that prevents further turning when a given pressure is applied. There are inside as well as outside micrometers.