What is a crane bird look like? Information about the types, species, features, characteristics and facts of crane birds. 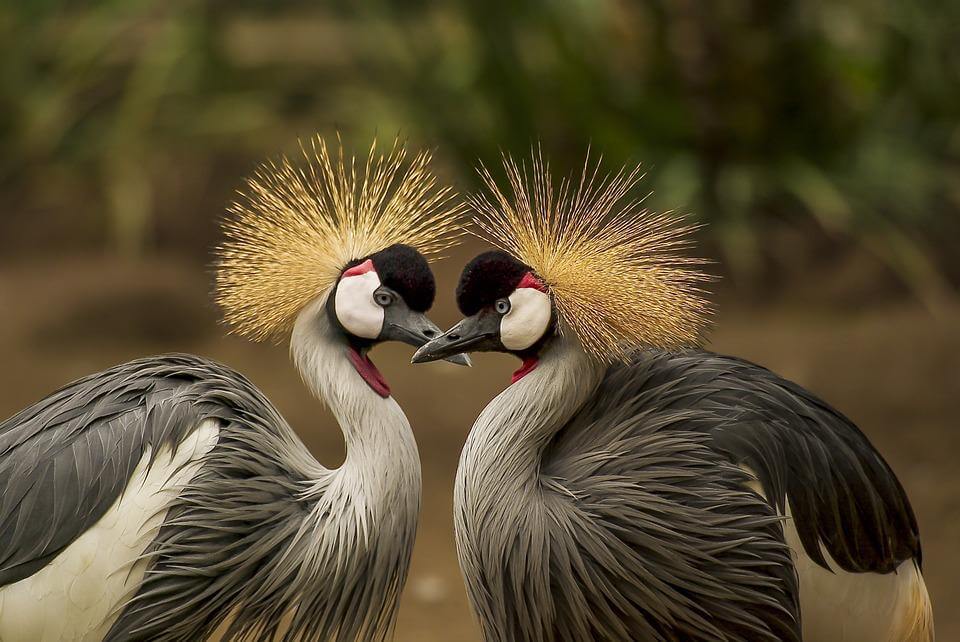 Crane; any of a group of large, longnecked, long-legged water birds that occur throughout the world except the polar areas, South America, the Malayan archipelago, the Pacific islands, New Zealand, and Madagascar. Cranes are not common except in some Oriental countries, where fliey are protected because of Buddhist religious beliefs. Some species of cranes are close to extinction; for example, it is estimated that there are fewer than 65 North American whooping cranes (Grus americana) now in existence.

Cranes are from 30 to 60 inches (75-150 cm) tall; males are usually slightly larger than females. The sexes are similar in color, with mostly brown, gray, or white plumage. Although often confused with herons and storks, cranes are distinguished by bare red areas or ornamental plumes on their heads and by their habit of extending their long necks straight forward during flight. Cranes also lack die large hind toe that herons and storks possess.

Most species of cranes have loud resonant calls, which they utter both on the ground and during flight. Cranes often form large migratory flocks in winter and fly great distances, often at high altitudes. Their food consists primarily of vegetable matter, such as grain, berries, small fruits, and tender roots. They have omnivorous tastes, however, and will eat a variety of animal matter, including insects, worms, snails, amphibians, and even small mammals and birds.

One of the most spectacular habits of cranes is their dance ceremony. The dances are varied and are engaged in by all species, often prior to mating. The birds prance about with the head and neck bent far forward in front of the body and the wings half spread. They leap high into the air, emitting a whooping sound. These exuberant dances are often performed in water by groups of birds of both sexes. Although often a part of courtship, the dances are performed by some species throughout the year.

The crane’s nest is a bulky structure made of plant material and placed on the ground or sometimes over water. The female lays two eggs which range in color from dull white to olive brown or even blue. Both parents incubate the eggs for about 32 days. The young cranes, about 1/100 the size of the adults, are able to leave the nest the day they hatch, but they cannot fly for four months. They are fed and protected by their parents for about six months.

There are 14 species of cranes making up the family Gruidae of the order Gruiformes.