What is a Chrysalis Stage? What are the characteristics of chrysalis stage? What happens during chrysalis and moth pupae. 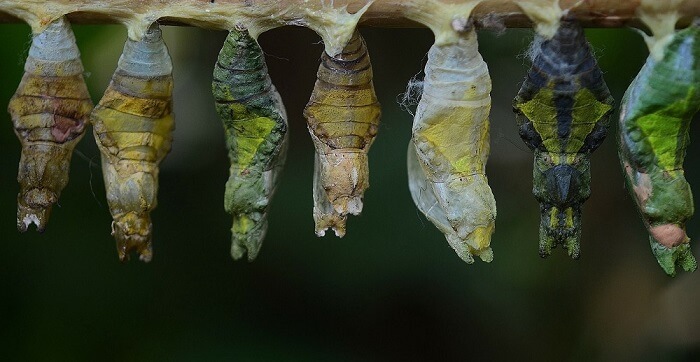 Chrysalis is the resting, or pupal, stage in the life cycle of a butterfly. During the chrysalis stage, the insect changes from a Caterpillar, or larva, into an adult. Although the chrysalis appears to be a mummylike structure that remains in one place and seems to be inactive, it is undergoing many complex physical and Chemical changes. During this stage each larval structure is broken down, and adult structures are formed. The exact Chemical processes involved in this transformation are not entirely understood.

Each chrysalis is tightly enclosed in a thin shell-like covering, and although some movement is possible, it is restricted to slight movements in the abdominal region. The color of the chrysalis varies greatly according to the species, ranging from dull brown to brilliant shades of green and yellow, sometimes with metallic gold or silver markings. A few days before the adult emerges, the butterfly’s color pattern may sometimes be seen through the thin pupal shell.

At the end of the chrysalis’ abdomen is a specialized spiny process, called, a cremaster. The tip of the cremaster is attached to a tiny pad of silk that was spun by the Caterpillar on a leaf, branch, or other support. Thus, the chrysalis is suspended with its head pointing downward. In some species, however, the chrysalis is supported in a more or less upright position by a thin silken band, called a girdle, that passes around the thorax and is attached to the support.

Structurally there is little difference between a moth pupa and a butterfly pupa, although the term “chrysalis” is never applied to the resting stage of a moth. All moth pupae are typically smooth and rounded, while butterfly pupae often have angular body projections. In addition, the butterfly chrysalis is rarely enclosed in a cocoon or buried underground, as is the moth pupa.